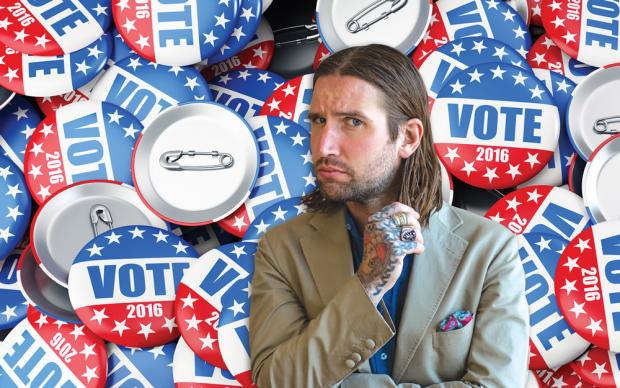 DEAR KEITH: Do I have to vote? I don’t care what people think about me but people judge others pretty harshly for not voting. I don’t like either party’s candidate and I don’t particularly like the third party candidates either. I might go in there and vote for Keith Buckley, just so I can say I voted. (I do believe Keith Buckley would make a good president, though I don’t know if you have the momentum to pull it out in this election cycle.) Thanks for your advice.—PLEASE VOTE ME OFF THIS ISLAND

DEAR PLEASE VOTE ME OFF THIS ISLAND: The question I have to ask myself when addressing this topic in our current climate is not “How many minds can I possibly change?” but “How many people in my life are actually racist, and, of those, which ones will threaten me with violence?”

Now, while the risk of personal harm is certainly a factor, it is not the main reason I tend to avoid discussion of this nature. I avoid it because—like a conversation on Allen Street at 2:30am—it is a dizzying stumble through meaninglessness that either ends where it began or it aggregates enough tension to weigh it down into the lowest strata, which is physical confrontation.

If I’m discussing the election with other like-minded individuals, we’re really just spotting each other at the gym, both sides being given room to strengthen our convictions while knowing that a confirmation bias is there to prevent a crippling slip. On the other hand, if I’m arguing across the aisle with Republicans, it’s like battling DC comic’s Doomsday—what initially began as a petulant group of intellectual infants has morphed into savage mutants unaffected by the powers of their opponents, immune to conventional damage and able to survive in a vacuum of space called “conservative ideology.” Because Trump has made Intelligence the new national threat, facts only make them angrier. They have been taught to fear appearance, and when truth is as ugly as it typically is, it’s no wonder none of them will allow it close enough to determine what it means.

So, there are two things that will come out of a discussion of politics with my peers—nothing and loss. I will either reaffirm what I already knew or lose myself in anger. After just one day of Warped Tour (let alone an entire summer), let me assure you that I have experienced enough futility and anger to last me a lifetime. I simply do not have enough spirit to argue politics anymore. However, I also know that I have a responsibility to the millions and millions of readers out there in Buffalo who are scrambling to unwrap my column and find the golden ticket of wisdom. For them I am willing to put my distaste for political discourse aside and spend absolutely no more than three minutes attempting to help you. The clock begins…now.

Since we’re all living on a hell planet, the only thing left to do is try to find some good, and sometimes that means looking at a much, much, much larger picture. The organism that first crawled out of the swamp wasn’t the majestic horse we know and dress up like today at a monthly clandestine meeting with other fetishists at a Holiday Inn off the 33, but it paved the way for that horse’s strength and grace and beauty. Hillary is that organism. Yes, she is a soulless, pandering liar who bought the nomination with American currency, but having a woman in the White House is an enormous evolutionary step for our nation. She may not be great but sadly that’s not the point right now. The point is that she will inspire greatness.

Trump—who opted to stay in the swamp and convince other spineless organisms that there was no world out of the water—is incapable of inspiring anything but more fear and anger. No good will ever walk in his footsteps. You and I and any undecided reader of this column need to help the country move forward, however slightly. Hillary is incontestably not the ideal candidate but she does have some things in common with the woman who someday will be, and right now that is all we can be thankful for. It pains me to say this, but I would suggest that if you decide to vote, vote for Hillary. Not voting isn’t standing firmly in front of evil, it is standing firmly to the side of it.

Time? Six minutes? Cory Perla, you owe me another $10.