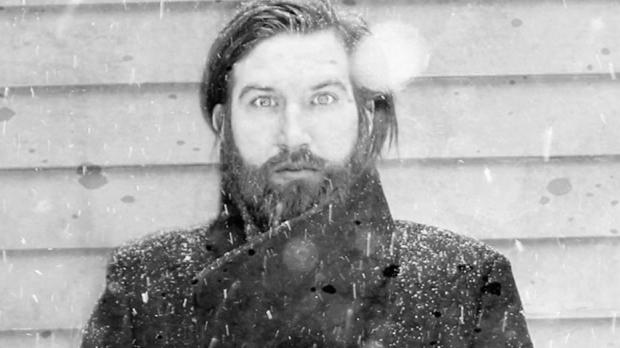 It’s the winter of 2013 and Every Time I Die frontman Keith Buckley sits in his home in Buffalo, New York with his dog Lemmy curled up by his feet. He’s just spent the morning writing, but not the type of frantic, aggressive lyrics he pens for Every Time I Die. Over the last few years he has compiled tour stories and memoirs; combining these bits and pieces to create a storyline for a semi-autobiographical novel.

The novel is called Scale and he’s been writing it in between sound checks; on the tour bus between shows in Bloomington, Illinois and Boston; and in the back of dark bars in strange cities. Now the novel is finished, his dog Lemmy has passed on, and the 35 year-old singer is beginning a new chapter of his life. Scale will be published by Rare Bird Books sometime next year, but not before Every Time I Die wraps up their winter tour in support of their latest album, From Parts Unknown. It’s the band’s seventh album but it somehow feels like a debut. It’s desperate, delirious, and full of some kind of new-found energy—of which even Buckley can’t quite identify the origins.

This week we talked to Buckley about his new book, his band’s latest album, and his tongue-in-cheek 1990s cover band.

I saw your 1990s cover band, Soul Patch, play on Halloween and it was so much fun. What’s the story behind Soul Patch?
It seriously was like a drunk talk at four o’clock in the morning at the Pink like: “Dude, we gotta start a cover band. There’s a resurgence, it’s been long enough where the 1990s stuff is cool again!” Then we followed up only by booking a show the next day.

Let’s talk about Scale. You just wrote your first novel. Why did you decide to write this book?
I didn’t really decide to start writing it, it kind of decided for me. For a while I was just biding time by getting a bunch of old stuff that I had written together. I thought I would put out a bunch of short stories myself, but I was just looking for something to keep me active because I just saw myself drinking too much and sleeping too long. It was a dark time. I had to do something positive. I started going through all of my stuff and finding these little stories I had written and I kinda realized, thematically, there was stuff that tied together. Then one morning while we were on tour in Europe a few years ago I woke up out of a dream and I had this idea to do a book that alternates chapters where one side is like a musician descending into depravity, and on the other side he’s trying to fight out of it. He realizes that his ego is not the most important thing in the world. You follow him to rock bottom and then you watch him try to scale out of it.

The main character’s name is Ray Goldman and he’s a burn-out type.
He’s burnt out on himself. He’s a nihilistic asshole who can’t find any order in anything. His senses are constantly exploited. He’s just after the next fix—not necessarily drug-wise—but he’s a scumbag. The point of the story isn’t really about this guy on tour, I only used tour stories to make it a little more authentic. I felt I could do that a little more thoroughly because I actually lived it. So those parts are very real.

A lot of your lyrics for Every Time I Die have to do with the same kind of subject matter; this burnt out persona. But at the same time, you’re a very successful musician. How do you strike a balance between this persona and your actual success?
That’s the other meaning of Scale. It is a balance and there is a balance to it. [Goldman] doesn’t necessarily find it as much as it finds him, but he does struggle with it, a lot. The way that the book is set up is that the even chapters are kind of after this epiphany he has, and the odd chapters are before and leading up. It’s a constant fluctuation back and forth.

What was a typical writing session for Scale like for you?
It depends on how serious I got. At first I hated it because I knew what I wanted and I saw it, but I just couldn’t get to it. So I would write after sound checks and before doors for three or four hours and then I’d come back that night and I would just hate everything and delete it. I got really frustrated. Then I gave up on it for a few months, which gave me some clarity. Then it got really intense; I’d wake up and do it until I had to do something else, then I’d go back to it. Toward the end when it really started coming into frame it would be a good five or six hours a day.

You wrote this book over the course of three years. In comparison how long did it take you to write From Parts Unknown?
A month. [Laughs]

Completely different processes.
It’s a completely different thing. I’ve always compared [writing lyrics] to doing a crossword puzzle. The frame is there and all of the parameters are set and the margins are drawn and you have to fit the words and syllables in perfectly. There is a very limited space within which you have to work. I know how to do that because I’ve done seven or eight albums. When I sat down to write free-form it was a very different thing. I had to pump the brakes a lot. Trimming the fat was a lot of the process of writing this book. Whereas with lyrics I find myself struggling to just get it to the borders.

From Parts Unknown. I’m guessing that’s a reference to the Ultimate Warrior’s hometown.
[Laughs] It’s not necessarily! But it does so happen to be that, and yes, it was inspired by a wrestling documentary we watched on a bus in Europe but it wasn’t the Ultimate Warrior who was referred to as from “parts unknown” first. I honestly don’t remember what the wrestler’s name was but it was some old fuckin’ jobber. They probably just said that because they didn’t even think to write a back story for him! Like they didn’t even care; he was probably just some dude off the streets they just used so he could get his ass kicked by Papa Shango or someone. But the name just kinda struck a chord with me like it would make a great name for a record because, to be honest, when I was writing Ex Lives I didn’t think I’d have another record in me at all. I was shot. I was mentally exhausted. So this record really came from somewhere that I was unaware was there. I know it sounds like new age hippy shit, but I started meditating a lot it really really clarified things for me. That was what got me off that path of “I’m going to drink until I’m dead, I’m going to smoke until I can’t sing anymore, and I’m going to make some stupid mistake that’s going to cost me my life and job and relationships.” It wasn’t an epiphany, but once I started meditating I started finding purpose in things I previously thought purposeless. The fact that it worked was a huge surprise to me, so that’s also kinda where the title came from. Meditation is just about finding a quiet place. All of a sudden these things show up that have never revealed themselves to you before.

From Parts Unknown feels like a debut album all over again just because it’s so desperate and so urgent.
Lyrically for me, it was the first honest album I’ve ever written. It was the first time I was genuine with what I was talking about. I wasn’t trying to mask it in all these idioms and metaphors. There is imagery but I’m not like hiding confessions or trying to fool anybody or be something else. I was feeling like a new person and if this album feels like a new band, I can understand that. It felt like a new band to me.

There is one theme in particular that it seems like you’ve taken with you from Ex Lives—and probably even further back—which is this theme of being between life and death. Or in a sense, waiting for death but being stuck here.
Being stuck was a huge theme for Ex Lives and I can say that it was the most bitter record that I’ve ever done because I felt like I was stuck and nothing in my life was changing. I was stalemated. I’ve been doing this band for 10, 15 years, and we were not getting bigger or smaller but just kind of staying the same, and who can I blame? Who is at fault? “Oh, it’s the label, it’s the kids, it’s my band, it’s me,” I’d say. It’s everything else except what it really was: I just didn’t care enough. It was just like: “Oh, ok this is working I’m not going to try and make anymore out of it. But [From Parts Unknown] just accepts the fact that something has to end for something else to start. It might sound stupid, but giving up smoking was a huge thing for me because it was so inexplicably tied to my image. When I quit smoking it was like I’m giving up the person that people think that I am because people think I’m just the guy that drinks and smokes all the time, but that’s boring. It wasn’t this huge profound movement, but there was a clarity I had that I didn’t before.

This will be your tenth year doing the Every Time I Die Christmas shows. You’re doing three this year and they are all sold out. What is it like to come home after a long winter tour and end on that note?
It’s the best. There is nothing like it. Bands say that but I really feel like the relationship that we have to Buffalo is just so special that I can’t see that happening in any other band. I’ve been around other bands playing hometown shows and the energy is nothing compared to what happens in Buffalo when we play a Christmas show. We’re so grateful.