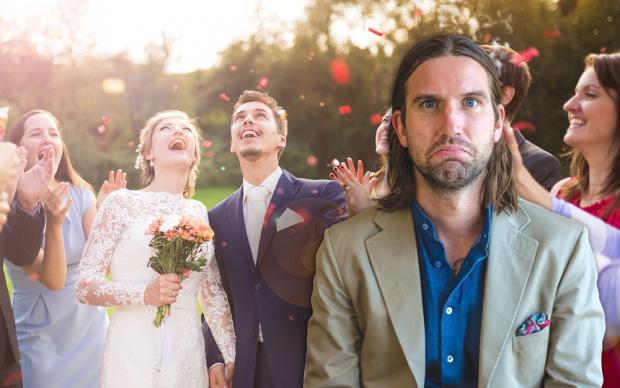 DEAR KEITH: I’ve been in a committed relationship with my girlfriend for several years and I love her very much. Leading up to the holidays, I was asked several times—sometimes in her presence—when I was going to pop the question. This has become a huge pet peeve of mine. The two of us have talked about it and we’re on the same page—it’s just not the right time to start planning a wedding for various reasons. But that’s not really the answer people are looking for, and it’s not the answer I like to give, so each time I’m asked this question, I’m at a loss for words and it becomes very awkward. Am I wrong to be irked by this question?  Could you please help me come up with a polite and appropriate response, or at least a way to blow off this question?—I PROPOSE YOU CRAM IT

The question of “when will you marry?” is the unmistakeable sound of an old value system sputtering along the path of time on fumes which makes the holiday season a perfect opportunity to carelessly broach the subject, as a warm home teeming with slightly intoxicated bliss is the ideal ecosystem for inconsiderate relatives to lay their didactic views concerning morality like slimy Mogwai cocoons in the attic of the the Peltzer house hoping to once again repopulate liberal America with god-fearing conservatives beholden to ritual (i.e the Gremlins) but which instead hatch with an unforeseen agenda, releasing years of resentment in the reptilian form that, for the sake of this metaphor, we will call “passive-aggression” and reek sheer havoc on innocence (i.e the town of Kingston Falls) and love without purpose other than the act of loving in itself (i.e Christmas). Holy hell, did I just uncover the socio-psychological implications of Steven Spielberg’s 1984 Christmas classic The Gremlins? Can’t help but think the obvious answer here is: yes, Keith. I did.

What I was getting at before my deeply rooted love of famous Hollywood brands so rudely interrupted is that people who are invested in the love life of others are members of a dying breed, and if they’re not dying, then they’re thriving in enormous mansions funded by hateful churches somewhere south of the Mason-Dixon line which makes you wonder if there really is a God. Either way, humanity has reached what’s called an “Anthropocene” which means that our brazen stupidity has had an irreversible effect on the planet’s biodiversity and we are all poised for extinction. This, in itself, is a perfect retort to your racist great-uncle’s question regarding your plans to dump thousands of dollars you don’t have into a union recognized legally by a society you don’t feel anything in common with, but for my money I would tell him that you and your girlfriend will not wed until gay marriage is legal everywhere, because then he will have a heart attack and die and the world will be a better place after all.