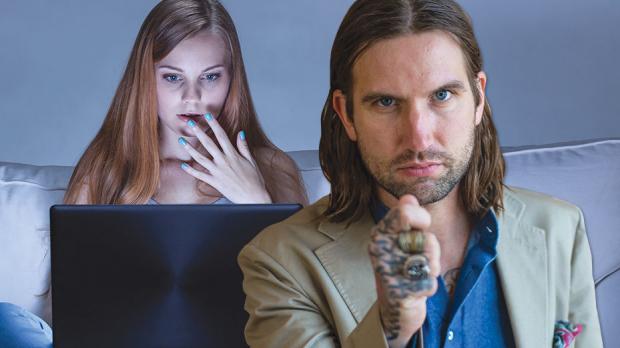 DEAR KEITH: A high school friend of mine posted a political rant on Facebook, which I disagreed with. This friend tends to be a bit hot headed and often takes a contrarian stance on current event issues just because. I politely (at first) disagreed with him but he quickly blew up at me and made it personal. The conversation ended when he blocked me on Facebook. I’m not so concerned that he blocked me, but I’m afraid that he’s just isolating himself from everyone who disagrees with him. Should I reach out to him via an alternative platform (maybe real life?) and hash it out or should I just accept that this guy is living on his own planet? –MY CONTRARIAN FRIEND

DEAR MY CONTRARIAN FRIEND: “Isolate Yourself From Everyone Who Disagrees With You” should be the slogan for the internet itself. It may sound like a utopian premise, but when we relocate from the world to the World Wide Web, we are venturing into an environment that we have hand-tailored to bolster and protect each and every perverse desire that lurks in our creepy heart—a veritable wonderland of sexual excretions, grainy footage of two fat women fighting behind Arby’s and an unlikely friendship forged between a snake and a horse. Gaining access to this paradise is the reason we even gave ourselves a screen name in the first place and yes, in retrospect, I definitely should not have chosen “billcosbyfan_8” but I was young and could not possibly have known. If I may posit an analogy here (of course I may; nobody can stop me now, I’m too big to fail), our online experience is like Oscar The Grouch’s trash can. We find a bunch of stuff that we think we need, we cram it into a space that looks relatively small to the people loitering outside of it but is actually large enough inside to house a herd of pachyderms and then we close the lid and curse anyone who attempts to disrupt us from enjoying our private and personal version of reality. However- departing from this profound and eloquent trash can metaphor—what we’ve collected isn’t necessarily garbage. It is just paraphernalia that is non-negotiably “ours” and even though it may not be tangible or valuable to others, the things we carry are indispensable components of who we imagine ourselves to be and how we want others to see us. We log online to find bits of information that pertain to—and fuse with our idea of—ourselves, and we meticulously piece together an entity in the same way that Jesus Christ our white, male, american lord and savior pieced me together in my moms belly. Then, just as we all did when we finally emerged from our fortress of gestation, we immediately begin arguing about ethics in video game journalism and making jokes about Jose Canseco shooting off his own finger. Facebook is the showroom floor where we reveal ourselves as our own creation for the first time. Miraculous, right? Then why does it so quickly become a battlefield instead of a viewing arena? The answer is simple: Because each opinion is precious and ought to be carefully considered and treated with respect. Hahahaha just kidding. It’s because human beings are awful.

The idea of being “nothing special” fills some people with a fear so abject they can barely comprehend it. Thusly, in an attempt to be “something” amidst the ceaseless online commotion that threatens to swiftly blur us into the background, we cling manically to “things” like a vine hovering over a pit of quicksand and we fight with or kill those that might take such “things” away from us. If we lose our “things”, we lose what makes us who we are, unfortunately failing all the while to realize that opposites can actually coexist and often do so with hilarious results, as seen in the hit television show “Perfect Strangers”. Whether these things are material objects like guns or records or clothes or Bazinga guy bobble-heads or whether they’re ideas like religion or a political stance, we defend them with a proud and righteous fervor not necessarily because we believe them, but because without them we risk being undefined. Outgrown. Forgotten. The tallest tree gets the most sun, and we as instagramers or tweeters or facebookers (that sounds like the name of a villainous futuristic cyber cult) are not particularly keen on watching others bask in a glory we feel equally entitled to. Entire countries go to war for far less than this. Hell, Jason Bourne found himself in some real pickles for this reason exactly. To quote my favorite hard rock band The Metallicas, the fact that countless human lives have literally been lost as a result of an identity at risk of being stolen or erased is “you know its sad but trueeeeeeee-ahhhhh.”

I realize I may have meandered a bit here into a more cryptic and obtuse rationale than you may have been looking for, but I’m getting $.07 a word and I have a mortgage to pay. The point, however, is this: When you argue with someone on Facebook you are rarely arguing about the issue at hand. In actuality, you are arguing about who is more REAL—you or them. An opposing viewpoint is an affront to someones image or idea of themselves and it is not likely your old friend will rethink his entire existence just because you flippantly tell him that the Foo Fighters actually suck, particularly if he has the stock of a Foo Fighters tattoo and/or bumper sticker invested in them. Facebook has been around for 11 years. There are 1.3 BILLION users per month, each of whom spends an average of 20 minutes a day posting. In all that time, would you care to guess how many people have read an argumentative comment and sincerely reconsidered their outlook? Zero.* Because most of us don’t visit Facebook to have our mind changed; we go there to try to change the minds of others. We are purposeful and driven and unwavering and as a result, the internet quickly becomes an island where millions of rams will butt heads until all necks are broken.

My advice to you is to scroll through your feed with a light-hearted detachment. Instead of engaging people in arguments- and don’t forget, you admittedly started this whole thing because you were outraged at an opinion different from yours- try spreading the joy that is inherent in jokes about dicks and farts. Share information. Above all, stop taking all of it so seriously. As much as you might want to “put someone in their place” for saying the dress is ACTUALLY white and gold, step back from your reactionary, impulsive mind and look closely at your motivation. Are you arguing because you feel your ideas are the “right” ideas and the world would be a better place if everyone homogenized their view to match yours? Are you doing it because you want to appear to others as more knowledgeable? Are you hungry for attention? Are any of these reasons different from the ones your friend probably had when he or she posted their “hot take” in the first place? The rush we get from peer approval is an incredible effect of a relatively new drug, but it is temporary and in order to attain it we may find ourselves ostracizing people we considered friends before FB came along. The war will never end and it is absolutely not worth your time or peace of mind. Unless the people you’re arguing with are “meninists.” Fuck those idiots.