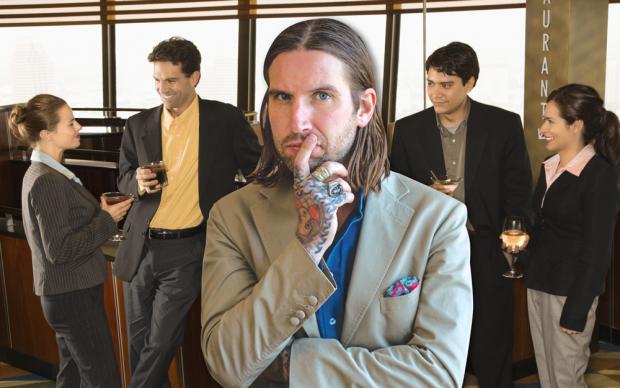 DEAR KEITH: High school was without a doubt the worst four years of my life. I hated who I was and it seemed most other people did too, as I was bullied relentlessly. In the years that have passed I have grown into a confident, outgoing, even (some would say) attractive person but, surprisingly, terror ran over me when I got an invite to my 20-year reunion. Do you think I should avoid this one like I avoided my 10 year?–LEAST LIKELY TO SUCCEED

I get a lot of submissions regarding the fear associated with high school reunions and I typically ignore them because I don’t like to be seen consorting with cowards or virgins, but if you’re telling me that you’ve denounced your unpopular former-self and have officially blossomed into a fully functioning dreamboat without telling me your gender, then there’s a chance you could be either Stefan Urquelle or Cinderella—and it’s really a coin toss as to who I grew up thinking about more. Cinderella for obvious reasons (her gorgeous feet were phallic surrogates that appealed to a fledgling castration complex, they reflected a dominant posture of the woman in sexual-social relationships which I found exhilarating, she hung out with rodents) and Stefan for the more subtle qualities, like his cool blazers. Imagine my secret, shameful elation then, when in season six of Family Matters, Stefan proposed to Laura Winslow in front of Cinderella’s Castle at Disney World. It was like ordering a 10-piece McNugget and finding some stowaway french fries in the box—momentary proof that God lives for you and not the other way around. However, if I am to provide you with even a modicum of sufficient advice, I’ll need some time to thoroughly imagine the impossible: me not being cool. Please excuse me for a moment [Steps away from the computer for like a billion fucking years.] Okay, I think I was finally able to get a basic understanding of what it must feel like to not be popular. Let’s give this a whirl.

Honestly, this isn’t the quandary you’re making it out to be. The only effect your old fears are having on the present circumstance is to give the idea of a reunion a terrifying form that is radically disproportionate to the feeble truth that sits at the heart of it, and I say feeble because your tormentors have had over two decades to compile the distractions of maturity in front of the mental image they had of you as their prey. Adulthood significantly weakens our desire to bully others because we’re typically too busy dealing with the adult problems that are bullying us. Plus, when it comes to what people consider acceptably fashionable, 20 years might as well be a geological era particularly when in reference to fickle high-schoolers, so it seems preposterous to assume that what people considered “unlikeable” traits still offend the sensibilities of your old classmates. I mean, you know what was likable to my peers 20 years ago? It’s absurd: Air Jordans, NWA, tapered stone wash jeans, fanny packs, gaudy jewelry, skateboarding, and—okay, I just wrote a list of things Pharrell Williams would put as his interests on a Tinder profile. Ignore those examples, they’re anomalies. What I’m saying is that to assume that anyone in 2015 would still be holding onto 20-year-old values or approaching the world with the same appetites they had in 1995 is like imagining that fully grown men and women would get super excited about a modernized Full House being available soon on Netflix, or that responsible parents would voluntarily hire a babysitter in order to go downtown to watch a cover band play songs like “Lump” by Presidents of the United States, and, as we all know that is just, well…god damn it…I suggest you keep your fingers crossed and pray that the more problematic classmates are dead.