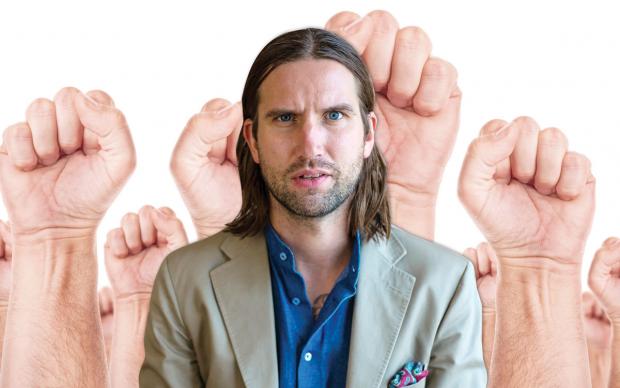 DEAR KEITH: I recently found out that my boyfriend of 18 months frequents Men’s Rights message boards. He’s definitely a member of at least two forums, possibly more. I’m a staunch feminist. I feel blindsided by this because he’s never expressed any misogynistic ideas in front of me. Though the sex is great and we are quite compatible, if he truly is a “Men’s Rights activist” then I don’t think I could possibly continue dating him. How do I handle this?—MY MAN RUN AMOK

MY MAN RUN AMOK: “A resolute feminist finds herself at a moral crossroads when she discovers that her sexual partner is a whiny, self-satisfied Men’s Rights activist” sounds like the tagline for the most unwatchable show in television history, just barely beating out “A straitlaced propane salesman in Arlen, Texas deals with the wacky antics of his family and friends while trying to keep his son in line.” Tune in as legitimate and necessary ideologies are sarcastically undermined by a total shit-heel with a sociopathic expectation of privileges that has been sharpened to a fine point somewhere on the internet! Featuring Al Bundy and the members of “NO MA’AM.” Theme song written and performed by Ted Nugent. Actually, hold on. I may have accidentally just developed what could be the most popular show in America right now. Honestly, if “NO MA’AM” reunited on live television I would be in front of my TV wearing that apparatus they put on Alex during the Ludovico technique in A Clockwork Orange so as to not miss a single second of those misogynist shenanigans. Ironically, of course…

As far as I’m concerned, the notion of a “Men’s Rights activist” is an idea so laughable that if I stopped writing at this very moment, my legions of loyal readers would fold up this week’s edition of The Public and simultaneously cry “By jove, this man has done it again. For the seventh ‘every two weeks’ straight he has tickled our funny bone with a feather of thought-provoking witticism until we piss streams of hot joy into our attentive and openminded trousers.” However, I am driven to continue on this time not only by the promise of the tens of dollars this column might bring to me, but by an authentic, deep-seated loathing of the self-perpetuated victimization that seems to be plaguing—not exclusively, but certainly—American culture: a Munchausen-esque adoption of plight which is driven by that same force that drives people to post links to their Amazon wish lists in their Twitter bio. It’s known as entitlement, and it’s as extremely dangerous as it is mildly amusing.

For those who are somehow unfamiliar with the “victimizer-as-victim” dynamic shift that’s sweeping the nation, picture in your mind that one friend you have who says something nasty to you out of nowhere. Then, when you recoil in pain, he acts incredulous and blames your natural, sincere reaction on your own inability to understand his brand of humor. Now imagine he meets a bunch of other dickheads exactly like him and they all decide that they are sick and tired of people like you being offended by the offensive sense of humor they were born with. So, in response to your response, they hold protests and make internet videos demanding that you stop persecuting them for their god given right to fuck your life up with unwarranted nastiness. Is this a dystopian nightmare that tessellates ad infinitum? Is it happy hour at Cole’s? The answer: both. The “Men’s Rights movement” is not a socio-political struggle meant to accompany feminism in its campaign against culturally assigned gender roles. What it is is a bunch of empowering rhetoric used by sexists to defend their “right” to continue to be sexist. And while “Meninism” may have been created as a way to jokingly draw attention to the “complications” of being a man, it was eventually hijacked by some very real misogynists and is quickly blossoming into another shining example of how desperate privileged people will become when they feel a paradigm shift approaching. There seems to be a growing trend of elitist subjugators deciding that rather than climb up, they’re going to climb back down the ladder of righteousness they have created, affix themselves under their own victims, and re-inherit certain concessions that civil rights legislation has appropriately taken away from them. It’s like when gun-nuts claim that their American freedoms are being encroached upon by responsible guns laws or when the guys who still wear Von Dutch hats claim their meat fetishes are being tyrannized by vegans who won’t enthusiastically fuck a slab of bacon-wrapped bacon. The idea of demanding sympathy is batshit crazy and profoundly selfish, and for that reason it’s a fad that Americans young and old have fallen in love with.

The point your conundrum raises (or that I’ve chosen to address, unsolicited) is that a growing number of people are using their ability to be offended as their right to be offended, and they’re doing so with an awareness of our society’s tragic obligation to pander to anyone claiming to be outraged, no matter how baselessly absurd that outrage is. This strange new longing to be persecuted is obviously problematic because the more we look away from the legitimate concerns of the bullied to focus on something as asinine as the feelings of the bully, the less likely it is that any real change will take place. We are, as my man Lincoln Park says, “caught in the undertow” of spurious anger, entitlement, and fear where nothing can move forward without moving back.

Movements such as feminism arose as a response to injustices perpetuated by an oppressor. If that oppressor even tries to use linguistic trickery to invoke the sympathy of likeminded bigots, we should, as a nation, either ignore or mock them. But we don’t. We give them a job at Fox News and encourage them to run for president. My advice to you is to ask your boyfriend outright just how involved he is in this “Men’s Rights movement” and act accordingly. If he jokes with some dudes online that he’s sick of the unrealistic expectations perpetuated by Chippendale dancers of the 1980s, then he’s just a goofy kid who is trying to make jokes that he probably doesn’t feel comfortable making around his feminist girlfriend. But if he’s sincerely threatened by your desire to be treated fairly, leave him immediately. You can always fuck bacon.