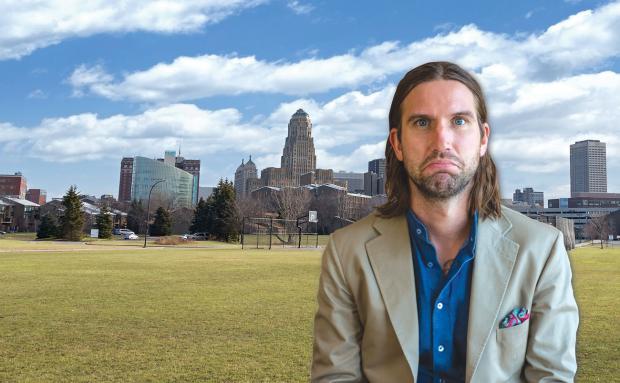 DEAR KEITH: I moved to Buffalo a year ago from downstate and I still haven’t been able to get a certain member of my family to visit me. My sister is constantly making up excuses not to take a trip over to Buffalo. I’ve tried to bribe her son (my nephew) with trips to Niagara Falls and local amusement parks in the hopes he’ll convince her to make the trip. I’m not sure exactly what her aversion is to visiting; we’ve always gotten along great. How do I convince her to come see me?—FOREVER BUFFALONE

DEAR FOREVER BUFFALONE: Whoa, whoa, whoa—stop the clock. You offered to take your nephew on a trip to the dismal, godforsaken city of Niagara Falls New York and Martin’s Fantasy Island and he’s not on a cannonball run with the rest of your relatives into town? Did you try to entice him with a possible wolf sighting during your leisurely stroll down “Chemical Row”? Does he know the radio station WHLD-AM 1270 is licensed there?

I’m no travel agent (although I definitely could pretend to be if any other publications are hiring) but perhaps the best way to convince your sister and her son to spend some quality time in our beautiful city is to not threaten them with a visit to Niagara Falls. Unless, of course, they’re interested in seeing where most of the torture scenes in Hostel 2 were filmed or where Boo Radley lives. I don’t feel the need to turn this entire column into an advertisement for the City of Buffalo, but if your sister’s impossibly high standard for entertainment cannot be met by any one of the three currently functioning rollercoasters at M’s F.I.—that’s what us cool kids are calling Martin’s Fantasy Island nowadays—assure her that there are infinite wonders to behold and even more than infinite action-packed happenings right within our own densely fortified city walls.

For instance, if architecture is her thing, why don’t the three of you grab some beers at the newly remodeled Hotel Lafayette set right in the heart of downtown Buffalo, a historic building constructed in the French Renaissance style dating all the way back to 1902 or pick up some beers and check out the Darwin Martin House Complex built by Frank Lloyd Wright himself in the early 1900s? Like sports? Who doesn’t. Try stocking up on beers at a Bisons game in the biggest minor league stadium in the country, or cruise over to the Anchor Bar—home of the chicken wing—and grab a dozen beers or so while you watch our major league football team, the Buffalo Bills, lose four Super Bowls in a row! Does art tickle her fancy? Then heck, swing by We Never Close, grab some beers and sneak those beers into the Albright-Knox Art Gallery to drink while you revel in the splendor of a tiny-ass Rodin sculpture. Of course, if you’re not into drinking beers, you could always suck back a few pints of Lockhouse Vodka—made right here in Buffalo—in the parking lot under our very own “the Skyway” and then go grab some light beers at a Mighty Mighty Bosstones concert on the waterfront. What’s that? Your sis still isn’t sold? Jesus Christ, okay, why don’t you and your unappreciative family just grab some beers and come over to my house. After we polish off all your beers watching YouTube videos, I could take you to Allen Street and then lose you on Allen Street because your sister sounds like a complete fucking nightmare.

All right, enough of this exhilarating horseplay. The real issue here is that you feel slighted by your sister and you want to know why she will not make “visiting you” a priority. Well, the reason is actually a lot more simple than you might think: She doesn’t like you. That’s all there is to it. Your sister has a choice to visit you and she chooses not to because she doesn’t like you. “But we’ve always gotten along!” you’re undoubtedly saying in a high-pitched, incredulous tone while reading this at SPoT Coffee, and I certainly am not in a position to argue the contrary. You have the same parents and relatives, you grew up in the same house, had the same pets, may have gone to the same school, in which case you might have had some crossover friends, maybe shared a few lovers (wink, wink) and because of all this, you have probably “always gotten along” splendidly. But of all of those conditions that you and your sister found yourselves in, how many of them were separately and simultaneously chosen by both you and her based upon personal preference? If I hadn’t just wired the last of my savings to a Saudi prince in a very unfortunate bind, I would be willing to bet “none.” Odds are they were decided for you by external conditions like geography, economy and/or availability, not stumbled upon according to a moral compass that guides the hearts of two humans with similar blood. It’s because “getting along” is what people do until they’re finally relieved by the merciful graces of distance. You get along with your co-workers until the weekend, you get along with your girlfriend until college, you get along with your uncle Larry who removed his silk shirt at the Easter buffet so as to not get mustard on it until after the holiday. We suffer with what we must until we are given the option to suffer no longer. And because distance presents us with alternatives not mandated by when or where our parents fornicated, we rely on it as a scapegoat for removing ourselves from the unhealthy relationships that we may not have the ability or know-how to change.

Sadly, your moving to Buffalo might have been exactly what your sister—and maybe even subconsciously yourself—needed to realize that when “getting along” is no longer required, the bond was simply not strong enough to cover all the ground that moving put between you. That can be a difficult idea to process, especially because society—by way of shows like Full House—beat us over the head with the notion that absolutely nothing should come in the way of family. But the reality is that people drift apart, and if family is so important why the fuck did Kimmy Gibbler never go home? Fortunately, however, right now is the exact moment at which you can turn everything around completely if you choose to. By the very act of acknowledging this issue, you’ve already wrested the power to alter it from the hands of time that will do nothing but put more distance between you. The rest is not going to be as easy as bribing her strong, handsome son with a live cowboy show at M’s F.I, particularly when the real wound could date back years, but rebuilding is always possible. Look hard and see if you can pinpoint the moment where the road that you and your sister traveled down diverged and address it. Pick up the phone. It may come to light that she resents you for moving and feels abandoned, but your words of “got along great” as opposed to “love each other dearly and were best friends growing up” give me the impression that at least momentarily, she’s getting the space that she has felt she’s needed for a while. Whatever you do, don’t guilt her for not visiting. Make her aware that you miss her, you love her and that your door is always open. Unless you live in Niagara Falls. Then you’d better triple-bolt that thing closed and decide on some sort of secret knock.