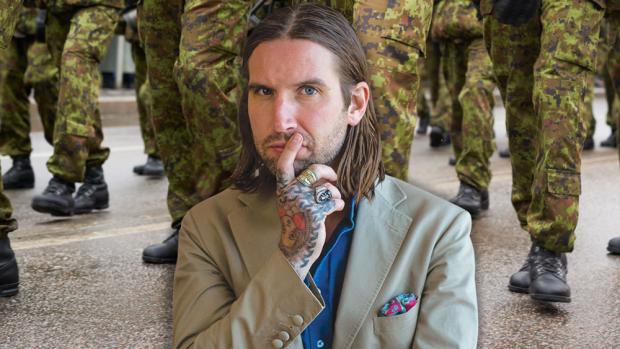 DEAR KEITH: Without getting too personal, nothing’s been working out for me the last few years and even though I’m philosophically opposed to the idea, I’m thinking of enlisting in the military. I need a change and becoming a drug addict just isn’t for me. -FUTURE MILITARY MAN

DEAR FUTURE MILITARY MAN: I’m going to first insist that we pump the brakes here for just a minute. How do you know being a drug addict isn’t right for you? Imagine, if you will, that Beethoven had made the frivolous decision not to play his harp or whatever just because he prematurely believed that music simply wasn’t “for him.” Why, the world at large would have been robbed of not one but seven high-spirited cinematic romps with a strong to very strong canine lead—eight if you count Beethoven’s Christmas Adventure, which, as a bit of a cinephile, I do. And what lowly state would humankind hypothetically be in if a young Steve Jobs had never attempted to navigate the iPhone 3 that he found washed up on a beach so many decades ago, or if Picasso stubbornly refused to make his first delicious pizza over there on Union Road in West Seneca? It pains me to conceive of a planet so artistically bankrupt as one without these dedicated visionaries. Each of them thoroughly changed the cultural landscape because they had one thing in common: They dared to try something new. So, as someone whose only form of recreation is recreational drug use, let me assure you that there are worse things you could find yourself involved with: things like prostitution, for example, or dishonesty, or burglary, or debt, or the Grateful Dead. And do any of these have anything to do with drugs? Methinks not.

Obviously I’m kidding. I certainly do not consider Christmas Adventure to be Beethoven canon, nor do I advocate drug use except maybe pot and sometimes LSD and definitely something called “moonrocks” that I took at a 72-hour private Skrillex concert held in the lap of the Lincoln Monument a few weeks ago. But to return to your original question, which may be nearly impossible thanks to these winding linguistic sidetrails that I’ve blindly ventured down, your philosophical revulsion to the idea of the military structure itself should be your guide not only for your sake but for the sake of the men on the ground who don’t want Kierkegaard over here at an existential rubicon while bullets are ripping the limbs off the college student from Billings, Montana who was just telling them moments prior how much he loves his daughter and wants to see her grow up in a terrorist-free America.

It boils down to the simple tenet that it is impossible to be truly happy doing something you know isn’t in accordance with your nature. And whether that be fighting a war you don’t believe in, selling a product you don’t trust, or playing music that you don’t feel, to be constantly at odds with your actions because they belie your fundamental beliefs wreaks unparalleled havoc on your conscience, which, if severe and consistent enough, I personally think could manifest as poor health, mental instability, and even an altered physical appearance—like how some old porn stars seem to get a lazy eye when they’ve been in the game just a few innings too long, or how David Rockefeller Senior’s lifetime of exploiting fellow human beings and the planet itself for monetary profit has rendered his eyes blank and reptilian and his grotesque maw eerily rodent-like.

“Future Military Man,” my advice to you is to not go joining the army just because you need a change if you have already recognized that it’s not something you philosophically agree with, and I assure you that this advice comes independent of what I personally feel about the military. You could be talking about joining a sports team and my counsel would be the same. You risk doing irreparable damage to yourself by being dishonest and to others who unwittingly put trust in your charade. I know it’s a cliche, but be patient and accepting of your current situation. It may not be optimal yet but your ability to refuse the stranger’s candy offered to you even in your most hungry and uncertain of days will probably pay off far more rewardingly than a begrudged stint in the US military ever could. If you’re so bored with the rote routines of your existence while you wait for the calling you have no choice but to answer, make some tiny localized changes first that don’t involve possibly injuring anyone else. Grow your hair out. Lose a significant amount of weight on a crazy diet you heard about from the Joe Rogan podcast. Get a new tattoo or quit smoking or write a book or buy a cool new leather jacket because you liked the way they looked on the people you admired as a kid. Hell, why not apply for a writing gig at a fledgling publication in town or start working on an album where maybe you sing a little bit more than you used to because you’re not as angry as you were when your band started like 15 years ago, or oh my god my life…