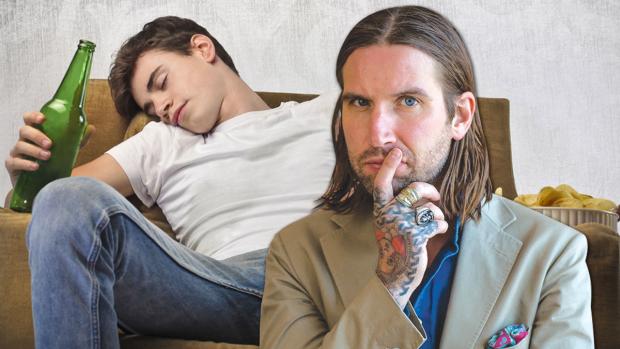 DEAR KEITH: I am a 27-year-old Floridian and I was hoping to solicit your counsel regarding the matter of my excessive alcohol intake in recent years. To be perfectly candid, I feel like you at least owe me some sliver of guidance seeing as how I mostly attribute my burgeoning alcoholism to an exorbitant consumption of Every Time I Die music in my early and mid teens, which I feel acted as an enabler to my “fuck school/work, let’s party” attitude. Being that I am to be married in a year, have a steady job, and a relatively happy existence, I wanted to see what advice you might be able to offer me in getting my proverbial shit together—considering your quasi-responsibility for my predicament.  —EVERY TIME I BLACK OUT

EVERY TIME I BLACK OUT: If I too may be perfectly candid, I owe you about as much as Maverick owes Goose, which is somewhere between jackshit and not a goddamn thing, but out of the kindness of my heart and my unhealthy dependency on the wealth and fame this column has brought me, I will at least give you my personal guarantee that your sense of entitlement to a plausible scapegoat for your own bad habits paired with an uncanny ability to shirk responsibility in a “so-natural-it-becomes-almost-involuntary” reaction will without a doubt guide you to an end more disappointing and horrible than the anemia brought on by any “burgeoning alcoholism.” Count on that. Your immorality was encoded into your genetics long before I ever lured you into a bottle with a moderately amusing line about a ponytail or an inside reference to The Pink. And if you don’t subscribe to the whole idea that your “fate is in the stars” and would rather operate under the pretense that environment is antecedent to genetic makeup when it comes to human development, then go ahead and look at your environment on a map. You’re from Florida. Key West literally has more bars per capita than any other place in the country, its current governor and human “unrolled condom in a suit,” Rick Scott, is pushing to end government funding of the humanities, and there are so many instances of modern-day drug-fueled cannibalism that “skin-eating criminals” is actually a term used to describe a portion of its unlawful citizens. These conditions would make Ian MacKaye do a keg stand. I’m sorry to inform you of this, but Every Time I Die didn’t break you. We just appealed to you because you discovered we were all broken in the same places. However, shouting into the secret, ugly chasms that each of us contain in the hopes of teasing what lurks there out into the light is exactly what punk rock and hardcore music is meant to do, so to quote one of the more influential lyricists in your life—me—“my job here is done.”

All that being said, if you’re actually seeking some advice instead of demanding some apologies, I think that since your ship was so easily steered by a group of semi-drunk, bewildered, and slightly arrogant Buffalonians with little to no understanding of song structure, it would be in your best interest to disavow art altogether, because I cannot imagine what is going to happen to you when you discover the “Babymetal.” I implore you this very instant to drag and drop your e-books in the trash! Select, then drag and then drop your pirated movies and television shows into the trash! Highlight, then drag and drop your iTunes folder full of the devil’s music in .mp3 format into the trash! Click Command-A on any and all photographs on your external hard drive and—Jesus Christ, “destroying art” is not nearly as violent or exciting as it used to be.

Nonetheless, try to avoid exposing yourself to anything that may cause you to learn more about yourself because there is a very good chance that it might hinder your ability to “get your shit together” in a timely fashion. Refrain from being aware, awake, curious, lustful, angry, or amazed, as all of these conditions contribute directly to “being alive” and, as we all know, people who are alive are certainly not the ones sitting with their proverbial shit together in a nondescript cubicle counting down the minutes until 5pm when they can lock themselves into the one room of the house their wife allows them to decorate and pound off to Kim Kardashian on the cover of Rolling Stone. If this is much more your speed, then you are absolutely correct—my band may have had a heavy hand in convincing you to abandon this path of moral righteousness in order to get the most out of your youth while you had it, and we’re not the least bit sorry.