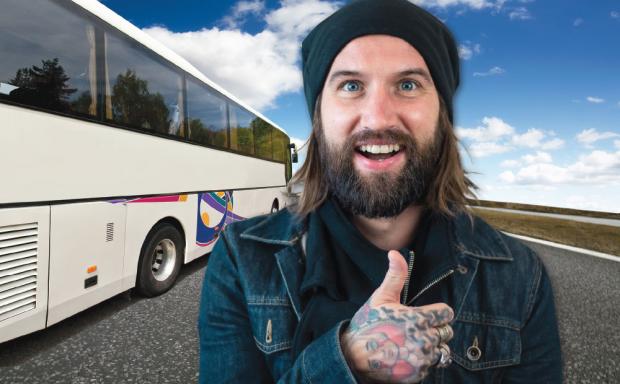 DEAR KEITH: I am in a mildly successful Buffalo band. My bandmates want to book a late spring tour of the East Coast, maybe 10 to 12 dates. It would be our first tour but we have the connections to make it work. My problem is, if I commit myself to this tour, I’ll have to quit my job. My boss can’t afford to give me that much time off and he’ll have to replace me. It’s not a spectacular job or anything—it’s not going to be my career—but I do like it and I’m comfortable there. Should I quit my job and go on tour or should I hold on to this decent job? –TO TOUR OR NOT TO TOUR

DEAR TO TOUR OR NOT TO TOUR: The question of “how many obligations can I effectively half ass at the same time” has plagued humanity since the dawn of time so answering this will not be an easy task, particularly because I plan on refreshing my Twitter feed a whole bunch throughout. But, I promise this response will at least be considered “passable.” Isn’t that really all we can hope for?

Trick question! Passable is not acceptable. However, neither is imperviousness to consistent failure so I honestly have no idea what to tell you. I guess if you are dubious as to what course of action to take, do only what is necessary to be great. You said it yourself; your job is “safe.” You know who else did only what was safe? Me neither. Never heard of ‘em. If you are not passionate about something, there is no chance that it will inspire passion in other people and inspiring passion in other people is all we were put on earth to do, aside from getting outraged by things we read on Facebook. To use an adage I just made up: Fortune favors the brave. Unless, of course, you’re as stupid as you are bold.

I tend to be ambivalent when people ask me if they should “follow their dreams” of being in a band because the band I’m in is an anomaly and I don’t necessarily believe in anything I could actually tell them. When it started I was too egomaniacal to believe that it wouldn’t work. I was selfish and impractical and hell bent on “proving myself,” but luckily I was young enough to have not been beaten to a pulp by a cruel world and mildly talented enough to receive encouragement from people I admired. If this band started today I would absolutely consider it a “sign” that after sleeping on strangers floors for four years, we really ought to hang it up. Back then, however, I didn’t notice signs. I just liked writing and performing and free beer and attention and if I had to pay for it with the currency of discomfort, it was far easier than finding actual money to pay for it. Obliviousness is a huge part of making your dreams come true, but this only applies to the youth. As an adult you need to focus on your instinct. Do you REALLY think you should drop out of your third year of medical school to become a sandwich artist because you have a unique gift, or do you just want to live the extravagant lifestyle that Subway sandwich artists live? If you’re honest with yourself, that honesty adheres itself to the DNA of your art and it reproduces quickly and spreads into the subconscious of everyone who bares witness. But if you’re lying to yourself, that deceit takes shelter in your art as well, and people will fail to be moved for reasons they cant even explain.

I read a book about codebreakers once where it said (and I’m paraphrasing here, whatever that word means) that the key to codebreaking was to be stupid, because only stupid people are as excited about their one millionth attempt at solving a problem as they were the first time they attempted it. There seems to be an admirable glory is persistence and an inherent shame in quitting, but I don’t believe that applies to every single avocation out there, particularly ones centered around personal expression. There is no blanket answer to your inquiry, but since I’m the resident advice columnist here and they’re paying me the big bucks to pretend like I know what I’m talking about, my advice to you personally is to work until it doesn’t work. If your job isn’t working for you, quit and join a band. If the band stops making you feel fulfilled, quit and go back to work. High school gym teachers and Jesus will tell you “don’t ever give up” but I’m here to tell you “don’t always give up.” Once in a while it’s actually pretty cool. We’re all going to die anyways. Does it really matter that you never finished writing that fan fiction novel about Jim and Pam from The Office?