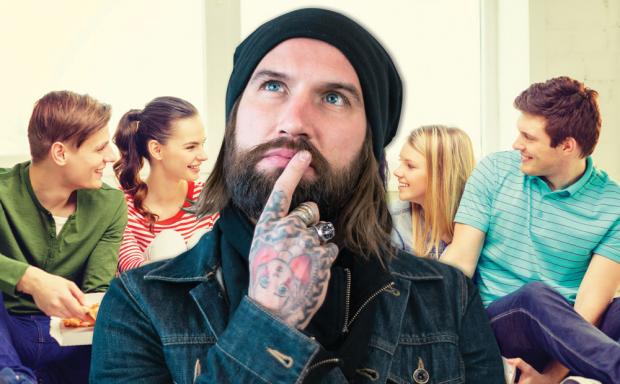 Editor’s note: As frontman of Every Time I Die, Keith Buckley has traveled the world gaining insights about the universe. In this column he’ll use those insights to guide our readers with heartfelt and brutally honest advice. Have a question for Keith? Send it to advice@dailypublic.com.

DEAR KEITH: I am 25 years old and I feel like I’m socially inept. If I come off as rude, I don’t mean to be. I think I missed that developmental period where you learn how to shallowly interact with people—”chit-chat” or whatever you call it—and have really tried to avoid it at all costs my entire life. I really didn’t have many friends until I was 17. People always think I am rude, or condescending, or crass. What should I do? Should I learn how to better fake chit-chat, or should I just go on as I am, potentially offending people with my lack of social skills? –25 AND LOST

The answer I received from my own brain time and time again was a resounding “yes,” unless, of course, the question was something hopeful. Then the answer was “no.” It really depended on the specifics of the question, but the gist was usually this: “You are worthless. You are weak. You are impotent.”

“Important?” I would ask eagerly.

“No,” my brain would say. “Impotent. It means that your genitals are a useless ornament pinned like a short paper tail on a dumb, hairless donkey.”

As a result of this perpetually damning inner voice, I grew resentful. Like you, I too found myself behaving rudely towards others because I was convinced that they were being happy just to spite me. Furthermore, if I could learn to vilify and subsequently hate them, I could believe that I didn’t need to be like them, that their way wasn’t the right way. But if you want to believe that happy people are wrong, it’s not enough to simply detest their behavior. You have to extend the parameters of contempt to encompass the things that make them happy—their friends, music, life itself. And so I did, so committed to shaming the blissful was I. It continued for years. It was tiring, but my anger was thorough and focused.

But “25 AND LOST,” one day that all changed and I believe it will change for you too. Pay close attention to my narrative because there is none like it in the world. It is unique and captivating and there is a bit of sexuality and even some humor in it, but not so much that it doesn’t still kind of make you think. It is as follows. The time: 1997. The place: West Seneca East High School. The year: Is this like the date? I already said 1997. Oh you mean like what year of school? Senior year. A young Keith Buckley has only one friend. She is a reasonably cute but an otherwise sexually ambiguous tomboy who would accompany me home from school or to my father’s hardware store where I worked part-time as the only employee. I was still very much a shy, angry, and sexually repressed Bart Simpson impersonator, but at the behest of my parents I eventually built up the courage to join the school basketball team. To no one’s dismay, I sucked. The whole team sucked, in fact, except for this one tall, sweaty hunk who also happened to be dating the hottest girl in school. I remember watching his glistening shoulder muscles heave and instantly I would revert to the old tropes of doubt, jealousy, and self-hatred that I had experienced whilst watching the kid with his own paper route get an over-the-pants hand job at the back of the movie theater when our class took a field trip to see Schindler’s List. I was still as emotionally crippled as I had ever been and the realization that I would never fully be emancipated from those vicious cycles of confusion and shame only accelerated my descent down the toilet that was my life. I was surely lost. Lost, I tell you…(whispering now) lost…

One night after returning to my parents’ house from a party where I had been unduly humiliated in front of all my peers, I found a really long chest hair while taking a poo or a pee, I don’t recall which one. At first I was horrified and wondered if I might be dying, but before long I remembered a conversation that I had overheard at camp about which body parts were pierce-able and realized that the “hair” I had discovered was in fact a “pube” and I was not dying, but rather entering a part of my life known as “Pube-Birdie.” My body was beginning to change, and with it so must my mind. Before long, I was covered in cool pubes. If that wasn’t cool enough, my basketball team began winning more games, I got the lead role in the school play, I bit into a can of pop with the sharp teeth I developed, did a handstand on a moving van, and even invented a dance that everybody at my high school prom did in unison! I was the coolest kid in school and I have never looked back. To this day, I still have those pubes.

Moral of the story? Don’t have a cow, man. You might come down hard on yourself for seeming “rude” but you’re considerate enough to know that the nice people around you deserve better. That’s a good start. Relax and enjoy some Hooter’s wings. Tell Tammy I said what’s up.