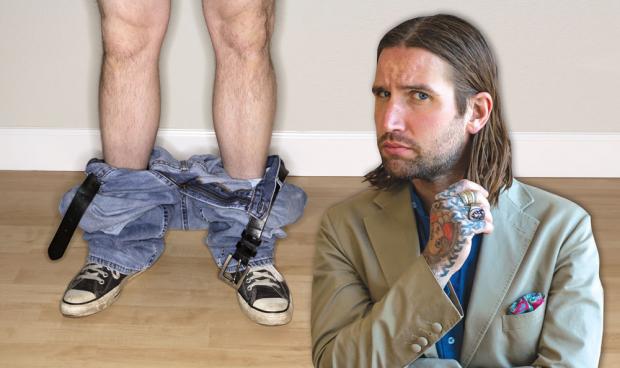 DEAR KEITH: I love my boyfriend. He is absolutely everything to me. But I’m honestly considering breaking off our relationship because of his refusal to partake in any sort of “manscaping.” It is an enormous obstacle to overcome when performing oral sex which I typically enjoy as much as he. How do I get him to change his ways for the benefit of our love life?—MAD ABOUT PUBE

MAD ABOUT PUBE: For the record, I take umbrage with the word “manscaping.” I understand that the terminology is too ingrained to undo now but how did we as a society chock full of clever millennials completely overlook the option of “LADscaping”?! It’s a far superior pun for numerous reasons. First and foremost, it’s the simplest modification of the phrase serving as the basis of the joke (“landscaping”) as it opts for removal of only one character rather than the removal of one AND substitution of another (D and L, respectively) given that—and here is the second reason why it is vastly greater—a gender specific colloquialism is already present! On grounds of efficiency alone my pun should have been the one granted permanent fixture in our vernacular but these damn online kids don’t ever think to ask for my opinion about anything anymore. Thirdly, “Land” and “Man” are slant rhymes. They share the same vowel sound. Big whoop. Would any poet in her right mind ever end lines with “giraffe” and “soulpatch” when penning a TS Eliot Prize-worthy masterpiece? Probably not because the reoccurrence of a short “A” does not a rhyme make though it seems like it would be a really cool poem that a lot of interesting people could relate to and possibly be moved to tears. In my opinion, the only rhyme lazier than Man/Land is when Beyonce said “I could have another you in a minute/Matter fact he’ll be here in a minute.”

Okay now to the topic at hand or, more specifically, at mons pubis. So you’re disgusted by your boyfriend’s ample tuft and wish he would dial it back a little bit? It’s here that I find myself repeating something I say quite often: I really wish I had more information about this man’s genitals. Is it an offensive odor or something and he won’t accommodate your desire for him to be more hygienic? If so, the solution is simple: you murder him in his sleep. That is completely insolent. He’s on some “I am man hear me roar” trip? Unacceptable. Of course, if no weapons are available or you’re not the “Snapped” type, you could just plug your nose like you were taking a spoonful of mineral oil and keep loudly repeating “p.u.” throughout the tryst. Shaming is key since I get the impression that his inconsideration for you is some childish power move. If done correctly, he’ll eventually feel so embarrassed that he takes the initiative and attends to his cleanliness immediately and I’ll have saved yet another insanely dysfunctional relationship. But if this is purely an issue of aesthetics, then let me ask you a question: “Why?” Why in gods name would you require more visibility of this man’s wretched ornamentation? They’re called private parts for a good reason, have you ever seen it up close? There’s some really vile stuff going on down there. Like a turkey wattle full of toothpaste dangling off a baby mole rat wrapped up tight in a piece of dirty, lukewarm rice paper. Hell, the very thought of my own groin makes me gag incessantly and I’ve only ever seen it from a distance so I can’t even imagine possessing the desire to have such a clear view that I would be willing to end a relationship if I couldn’t sit front row. But, human sexuality is a mystery that has baffled virgins like that shit head over at Game Stop who won’t honor my expired Groupon for centuries so I certainly would never judge people for their preferences. Love is a beautiful thing, even if the pieces we use to physically express it are ghastly abominations. If you truly care for each other you really need to come to a compromise here. Is he that emotionally attached to his own pubic hair that he simply will not forfeit even an inch of them? Does he understand that hair grows back or is he under the impression that it’s a cluster of rhino horns down there? Am I actually at a point in my life where those questions and their accompanying imagery legitimately crossed my mind for one single second? Can anyone else in this cold abyss even hear me scream?