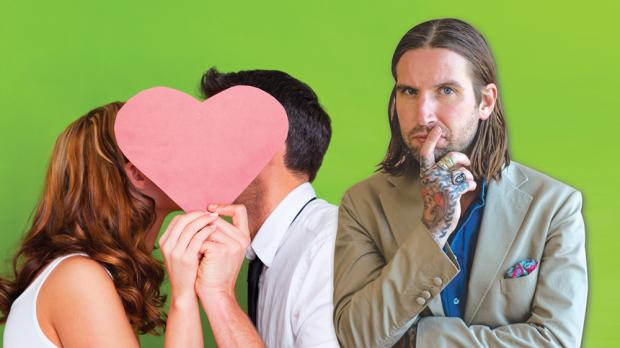 DEAR KEITH: I love the idea of celebrating love, but I hate the idea of the Hallmark-trademarked version of Valentine’s Day. From what I understand, Valentine’s Day began as a Roman fertility festival. That’s more my style. How can my boyfriend and I celebrate Valentine’s Day without falling into an endless pit of consumerism? –HATING HALLMARK

DEAR HH: If you’re looking to “honor” the “legacy” of “Saint” Valentine, the “Roman priest” imprisoned for “ministering to persecuted Christians” but have no desire to “partake” in the “marginalization” of the “mostly European” folk “traditions” “ass”ociated with him, “I” have a “simple” suggestion: Get a damn clue! All this bunkum about a martyred healer is just plain malarkey, and what isn’t malarkey is probably, uh—[looks around for Mark before consulting a ragged, dust-covered thesaurus pulled from the shelf of the Bodleian Library at Oxford]—claptrap. Nobody really knows anything about this alleged saint, since all contemporary records were destroyed in the Great Persecution of the early fourth century, which was drastically different from the Great Persecution of today, which is what I call my ceaseless online battle with the growing legion of internet trolls who refuse to apologize for sharing the video of me shitting my pants during a breakdancing routine in front of the Broadway Market two Easter’s ago.

And while numerous legends exist to this day concerning either a miracle performed bringing sight to a blind woman or overseeing clandestine marriage rituals for soldiers forbidden to wed, even the feast day of Saint Valentine on February 14 has been removed from the General Roman Calendar because the Church admittedly has no idea what this guy was about. They have opted to wash their hands of this mythos rather than spread misinformation, which is a noble deed considering this same institution knowingly covers up allegations of child abuse and intentionally misconstrues the Gospel in order to oppress homosexuals and women. So, while I respect your distaste for the acquisitiveness that has dominated our Western culture and your desire to find a way to express pure love in non-materialistic terms, you’re missing a very important point: With no facts about him in existence, it’s a logically sound assumption that Saint Valentine fully endorsed the exchange of meaningless chachkies from the mall! Let this non-disprovable untruth free you from the confines of your consumerist guilt! Put on that “Pink” jumpsuit you got from Victoria’s Secret and apply just a spritz of Sophia Vergara’s Eau De Parfum,* because tonight you’re going to Longhorn Steakhouse where your boyfriend is waiting for you with a rose he got from Tops on his way over there and an oversized card from 7-Eleven inside of which is scrawled some bullshit poem he kind of remembered from high school and found in its entirety by typing a few key phrases into Google followed by “old poem.” And no matter how soulless you feel this “holiday” has become, just remember that even at their emptiest, each gesture of love is more real than St. Valentine himself.

* Five-second Iris Out, pausing just briefly to highlight the rash developing on your neck where you applied the perfume.