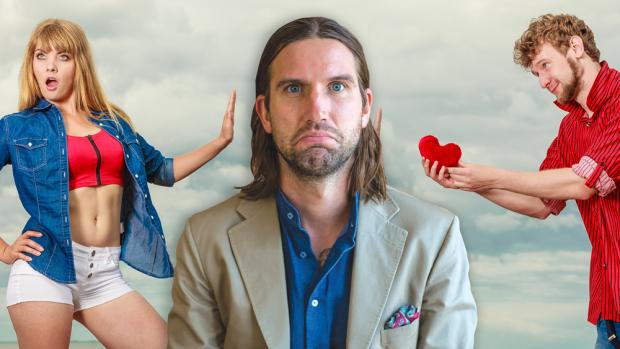 DEAR KEITH: My friend (a guy, I’m a woman) thinks he’s been “friend-zoned” by a woman he has a crush on. I don’t believe in the friend zone. I think it’s a term used by entitled brats to justify their rejection by women. How do I explain this to my friend in friendlier terms and what advice would you give to a guy who subscribes to the “friend zone” theory?–ZONED OUT

My DEAREST “ZONED OUT”: I too disagree with that godforsaken term, and please let me spend a beautiful, sunny afternoon in a cold, windowless basement now that my computer room has been changed into a child’s nursery telling you why. If an eight-year-old Keith Buckley heard that one day a bodacious babe with jigundous ta-tas in a string bikini would put him in the “Friend Zone,” he would have been so thrilled that an adorable little boner would have pulled his Skidz overalls just a bit tighter. (Side note: Today they would be much tighter if you catch my drift, *wink*.) Who wouldn’t look forward to being told by a woman who looked like she was in George Michael’s “Freedom” video that you will eventually get to spend your life in a zone reserved for your friends? I can picture myself picturing it now back then. Just me, a dirty-ass “My Buddy” doll, our family dog—who unbeknownst to me at that highly sensitive age will have died many years before this (I ask that you, my time-traveling reader, please do not reveal this news to me whilst I am fantasizing)—and that badass with the Bart Simpson shirt who smokes cigarettes in the field behind my school and who just asked to join my Dick Tracy fan club. With a whole zone. To ourselves. No parents. No enemies. Just a few buds calling sports talk radio and jacking off to nudie mags or whatever it is guys do when they’re adults. (Side note: That’s exactly what guys do as adults.) A friend zone was something to dream about. Something to decorate. Something to live for.

Now, as a 36-year-old man with his own Bart Simpson shirt, I could not imagine voluntarily entering a “Friend Zone,” let alone celebrating the fact that I was banished to one. And why?

*Notices Mark glaring at me from across the room.*

Because my marriage is sacred and “there is countless amounts of data that shows being married makes people happier”! But also, because putting someone there is just a polite way of saying, “I’m relegating you to a holding pen where people who are good but just aren’t good enough wait for circumstances to render you necessary.” So is it possible that your friend who is enthusiastically accepting his lot as a citizen of that dire community might be doing so because the psychological devastation of being told he’s insufficient is too heavy to let settle in? Let me answer that question with a question: Yes? It is this unqualified alcoholic with seasonal affective disorder’s opinion that you should let your friend have his voluntary delusion if the reality of rejection is too much for him to handle. It’s a coping mechanism that allows him to retain the strength necessary to get out of bed in the morning and that—as a lie—isn’t the worst that could be told. What is the worst that could be told is the one perpetuated by his crush who knows perfectly well he will never be boyfriend material but cannot burn the bridge in case she needs him for an emotionally selfish reason somewhere down the line. Well, that and the thing about Planned Parenthood selling body parts. That’s a pretty bad lie, too.