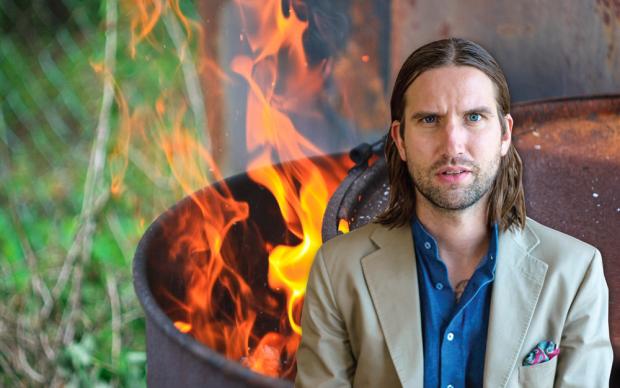 DEAR KEITH: My dad has started wearing a Make America Great Again hat in public. But he’s not a Trump supporter, he’s doing this ironically. Problem is, people who don’t know him don’t understand the irony and don’t find it funny. When we’re out in public together, people give us dirty looks. He thinks it’s hilarious, though, and won’t listen to our pleas to ditch the hat. Would it be wrong for me to straight up burn the hat and play dumb when he think he’s lost it?–SINCERELY, ISN’T IT IRONIC?

When I was 21 years old, I lived in an apartment with two other guys. One of the guys—while having his very own bedroom—insisted on living on the couch. All of his clothes were in a pile in front of it, and he would not only sleep there while some were trying to sit, he would piss there while sleeping. Empty beer bottles piled high around it, food containers aggregated, an ashtray overflowed, and before long that one corner of the living room began looking like what you’d imagine you’d see through a microscope when you zoomed in real close on one of Kid Rock’s molecules.

But despite all of this, you know what irked me most? Definitely the piss that I mentioned. Piss will always upset me more than anything else when there is piss involved, just know that about me.

Second up for the most irksome thing about this man, however, was the ironic t-shirt he insisted on dredging up from the pile of damp clothes whenever company came over, which read, in big white letters that he personally ironed on to a sickly thin black t-shirt, “I’LL FUCK THE FAT ONE.” This t-shirt, for me, represented everything about his lifestyle that I disdained and served as a symbol of his disregard for the people around him, particularly the fat ones. Today I would probably pay good money for that exact article of clothing, because, as I write this, it sounds pretty awesome, but back then the shirt was my nemesis, and since the man who wore it was immune to shame, his treasured possession would bear the brunt of my moral outrage. What to him was an ironic joke tee was to me a proclamation of harmful indifference—much like your father’s Trump hat. When I thought of the dishes around his hovel that I would have to wash, I pictured the slogan on his t-shirt. When I realized I couldn’t play Sega Dreamcast after class because the couch was occupied, I pictured the slogan on his t-shirt. It embarrassed and haunted me in equal measures and I admittedly obsessed over it so much that eventually I was left with no other option—I had to burn it.

So, one night while he slept, I took that sticky thing out back and burned it in the grill, and I have played dumb about it (and every other ill-advised thing I’ve ever done) to this day. While my friend would eventually overturn the entire house screaming about losing some “gift from his dead twin brother” and a week later be taken to the hospital by a panicked mother after a prescription med overdose in her kitchen on Thanksgiving, I was free for the first time in my life and it was exhilarating.

As you’ve probably surmised, “Isn’t It Ironic,” the moral of this story is to let your own emotions get so out of control that you feel you need to supervise the actions of others. Then, when you’re forced to realize that other people will not always conform to the life you’ve decided they should live, grow so silently resentful that one day, without warning, you lash out in anger at your unsuspecting victim and justify it to yourself by believing “they should have known better” even though you never actually told them how their behavior made you feel. Burn that stupid hat. It’s the only way we’ll ever make America great again.