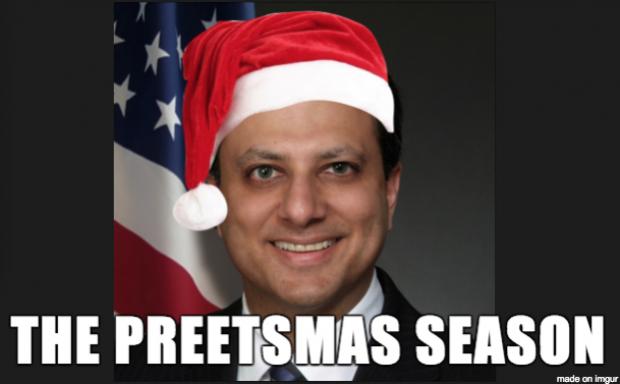 It’s been weeks — months — since we last checked in on Preetsmas.

You may recall that on May 28th, state police and FBI agents raided the homes of three prominent political consultants, former county Democratic chairman Steve Pigeon, former deputy Mayor Steve Casey, and Congressman Chris Collins’ chief of staff, Chris Grant. Authorities are investigating campaign finance and election law irregularities of the WNY Progressive Caucus (hereinafter referred to as “AwfulPAC”), and the extent to which they jibe with real life. There’s been speculation that the AwfulPAC investigation branched off into other matters .

Throughout June, we drilled down through the various disclosures and discussed or analyzed how they might be evidence of some illegality:

The statute of limitations for misdemeanors under the election law is two years from the date of a filing. It’s now mid-September 2015, and 2 year anniversary of the first batch of AwfulPAC’s 2013 reports has come and gone with no prosecution. It’s possible that prosecutors may instead choose to proceed under the New York State Penal Law, for filing a false instrument — a felony.  That may be a cleaner, easier explanation to a (grand or trial) juror.

It may be that prosecutors have focused more on other crimes, all well within the felony category.  It would be a shame to have them ignore the Election Law
even if these people are convicted on other things, because it’s the precedent that’s important — to avoid similar future violations, like illegal coordination.  These sorts of activities have been happening for a long time — at least since 1999, when similiar shenanigans took place on behalf of David Dale vs. Greg Olma, and for Jack O’Donnell vs. Al DeBenedetti. The people who think this all matters can afford to be patient.

Just this past primary season, we had two campaign committees get involved in Cheektowaga that are in blatant violation of the election law; Frank Max’s Progressive Democrats of WNY and a new committee called “Right Democratic Team” clearly participated in the September 2015 primaries, but improperly failed to make the proper financial disclosures. Neither committee filed primary reports, despite things like this happening:

Close readers of the Preetsmas series will recall Aaron Pierce of Irving, NY as having been invested in AwfulPAC, as well. He was a topic of discussion on the 4th and 7th days of Preetsmas. Two of Pierce’s companies found themselves in deep trouble, resulting in a guilty plea and over $1 million in fines, and Pierce lavishly exploits the LLC loophole to plunge tens of thousands of dollars into campaigns.

Max’s Progressive Democrats of WNY received $25,000 from one person just days before a primary election it never disclosed to anyone that it was participating in. Where did the money go? How was it spent — as a donation to one or more campaigns, or to make independent expenditures on other campaigns’ behalf? Whom was the committee supporting or opposing in September’s primary? Why didn’t it file the required forms and disclosures? Is this just another “oops we made a mistake?”

What, exactly, is Pierce buying by throwing $25,000 at Cheektowaga?

This is yet another case where a Max- or Pigeon-controlled political committee tries secretly to influence a primary election and does everything it can to avoid drawing attention to itself. Long after it’s too late to matter, or to comply with the letter or spirit of the law, the committee files a flurry of disclosures or amends old ones. It will file forms with the board of elections to reveal the candidates it was backing or opposing months from now — months too late to matter, and months later than required. And, in the end, we’re meant to believe that a person who used to be a town committee chair, has been involved for decades, and who has vied to be the county committee chair did it by mistake and didn’t know any better.

If you have any information concerning this investigation, please feel free confidentially to contact me at buffalopundit[at]gmail.com.