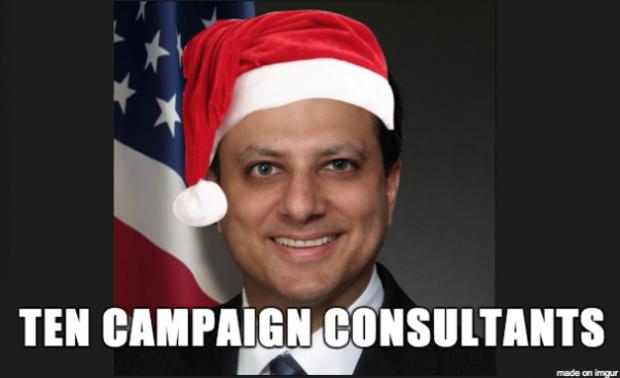 What is the true meaning of Preetsmas?

The Story of Preetsmas has many purposes and goals, and among them is to establish that the campaign finance irregularities and accusations surrounding Steve Pigeon and his coterie are not novel nor rare, but chronic and longstanding. Let’s call it “Pigeoning”.

Pigeoning: pi·geon·ing \ˈpi-jən-iŋ\: (n) (1) A periodic use of New York’s byzantine election law to actively sabotage and undermine the Erie County Democratic Committee; (2) The action of accumulating and using money, power, and influence.

But really, the sabotage bit has been a secondary goal, if it’s been one at all. The singular unifying thread has been to enable Pigeon and his hangers-on to gain money, influence, and political power. This is accomplished by, among other things, exploiting the squishy edges of a state election law that’s not written for ease or transparency.

It’s accomplished through doling out patronage and buying people’s loyalty. It’s accomplished through a magnetic attraction to big money, and by our typically New Yorkish corrupt-but-legal minor fusion party horse-trading. Through his machinations, Pigeon has, at times, controlled the Independence fusion line and influenced the Conservative fusion line. We can probably read some volume of quids pro quo within the word “machinations” in the preceding sentence.

Even now, literally not one District Attorney in Western New York has bothered to investigate or prosecute any alleged illegalities, and even enforcement by the Board of Elections has been lukewarm, at best. How convenient it must be, then, for a PAC to simply file a piece of paper and retroactively alter its very nature and being into an unauthorized or authorized committee.

Back in 2004, Joe Golombek challenged Sam Hoyt for the Democratic nod for Assembly, and found the backing of a committee called “Renew NYS”, the address for which is the home of Pat Ruffino. (There exists a similarly named, earlier PAC called “Renew New York”.  Inactive now, its address is listed as 101 Reo Avenue in Cheektowaga, which we know from the Seventh and Ninth Days of Preetsmas, is the home of Pigeon bookkeeper Sandi Schmidt.) Renew NYS was started and funded by Pigeon and Joel Giambra.

In a complaint to the state Board of Elections, Hoyt alleged that Renew NYS was illegally coordinating with the Golombek campaign. In addition, Hoyt alleged that the PAC was acting as an unauthorized committee, spending money on behalf of the Golombek campaign and against Sam Hoyt’s, but was not legally constituted to do that. Renew NYS simply re-constituted itself as a multi-candidate committee and refunded whatever contributions had been above the limits that such an entity could accept, and avoided enforcement action or prosecution. That’s not how it’s supposed to work, though.  The purpose of these election laws isn’t to enable committees to violate the law and then, when caught, re-declare themselves as something completely different, and have that apply retroactively. Candidates and the public deserve to have accurate information in real time — not months later, after the campaign is long over.

As far as evidence of coordination, take a look at the complaint brought against Pigeon’s and Golisano’s “Responsible New York” in 2008 and recall that Pigeon was a co-signatory for the Joe Mesi campaign while simultaneously running a pro-Mesi PAC, and that Jack O’Donnell was helping Responsible New York while simultaneously a co-signatory on the Barbra Kavanaugh campaign’s committee.

This is likely what Kristy Mazurek’s and Steve Pigeon’s WNY Progressive Caucus (“AwfulPAC”) tried to do when it filed its CF-03 in February 2014 to transform it — retroactively — into a multi-candidate committee participating and spending on candidates’ behalf in the 2013 primaries. We are awaiting final confirmation, but sources indicate that the AwfulPAC declared — nunc pro tunc — that it was an unauthorized committee for Dick Dobson in the primary and general elections, and in the primary for Joyce Wilson Nixon, Barbara Miller-Williams, Rick Zydel, and Wes Moore. They also claimed to be an unauthorized committee for Mark Manna for Amherst Town Board in 2013’s general election. Had AwfulPAC done that at its founding, it could have spent money on behalf of those candidates without coordination; however, as it was originally constituted it was legally only allowed to raise and donate money to campaigns. We’re meant to believe that it broke the law at the time, but a retroactive “oops” filing of a piece of paper retroactively rendered all its activities legal.

Those of you who pay close attention may recall the AwfulPAC’s brief foray into the Niagara Falls City Council race, specifically working on the behalf of Sam Fruscione. Literature appeared that smeared and defamed Buffalo developer Mark Hamister, who is working on a subsidized hotel project in the Falls.

At the time, Channel 2 ran a story on it, and AwfulPAC admitted it was behind the lit.  Again — not something a PAC is allowed to do. Fruscione lost his election, and it was this piece of literature that led Governor Cuomo angrily to confront Pigeon over the smear against Hamister.

We’re waiting to see whether Fruscione is among the candidates for whom AwfulPAC declared it was an independent expenditure committee.

Note that the AwfulPAC’s retroactive reconstitution as an unauthorized committee included the general election race for Mark Manna. Manna’s campaign’s 2013 10 day Post-Primary disclosure shows the AwfulPAC paying these amounts on his campaign’s  behalf, which Manna reports as “in-kind” donations.

(Click to enlarge) — that’s almost $5,000 in expenses that AwfulPAC supposedly paid for. CORRECTION: These expenditures appear as line-item expenses on AwfulPAC’s own disclosures here and here.  However, they are not disclosed as being expenses made on behalf of the Manna campaign.  Manna listing these as “in-kind” reveals that these expenses were authorized — not unauthorized — expenditures on his campaign’s behalf by an independent committee.

Three of the four AwfulPAC expenditures on Manna’s behalf relate to a Conservative fusion Party primary he had in September 2013. The maximum allowable contribution for that race, however, was $1,000. The fourth expenditure was for lawn signs, which conceivably could have been used for both the primary and the general elections and pro-rated over the two elections.

As for AwfulPAC, they’re in a bind — on the one hand swearing on their paperwork that the money was not authorized by Manna, but Manna swearing that the amounts were authorized contributions. That authorization is held and given by the candidate, not the committee.

One more point on coordination and AwfulPAC: in a Geoff Kelly article that ran in Artvoice at the time, Mazurek said,

Mazurek laughed off the controversy and called her detractors cry-babies, saying that she’d grown up around hardball politics. She also shrugged off responsibility for the content of the Hogues mailer, saying that the messages were crafted by the managers of the campaigns her PAC supported. “I don’t micromanage,” she said; she just writes the checks.

That bolded part sure sounds like “coordination” to me.

Little has been written about Chris Collins’ Chief of Staff, Chris Grant, whose home was also raided back in late May. We know of his involvement with Herd Solutions, but you’ll recall that we’ve written quite a bit about Aaron Pierce and his questionable tobacco money, and ties that Pierce had to Mickey Kearns. One of Pierce’s companies invested heavily in the AwfulPAC in 2013.

There’s also a sizeable income — over $150,000 — from his side-business at Herd Solutions while simultaneously employed by the County. Grant earned around $160,000 as a federal employee last year, yet Herd Solutions is still in existence and consulting on campaigns, as recently as November 2014. Working in the public sector is great, as Grant took a $9,000 payout of accrued vacation time from the County when he left.

You can see the original contract between PAPI and Lewiston Greenhouse here.

Note: on Monday we revised our information about Matthew Connors, noting that it was his name that appeared on some mysterious money orders that ended up with the AwfulPAC, but that he had nothing to do with obtaining them. So, who used his name and possibly forged Connors’ signature on these money orders in order to hide the source of these funds? Why didn’t AwfulPAC file a proper disclosure?

Above all — wouldn’t you love to compare AwfulPAC’s bank records with its election law disclosures? I’ll bet they don’t remotely match up.