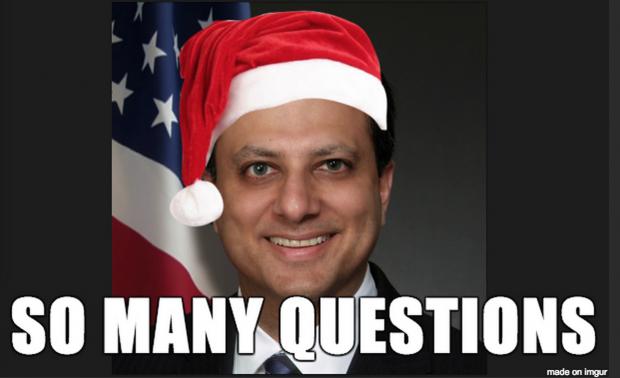 New York State Election Law §14-120 forbids people from making any payment — directly or indirectly — to any candidate or committee in any name other than their own. Furthermore, no candidate or committee is allowed to knowingly accept a payment in the name of any person other than the one who is actually contributing. Election Law §14-126 establishes that a deliberate attempt to evade contribution maximums is a crime.

In mid-August 2013, someone bought three money orders in the name of Matt Connors, and gave them to the WNY Progressive Caucus (“AwfulPAC”). Connors insists that he is an innocent victim, and there is no evidence to the contrary. But sources close to the investigation repeat that someone intentionally wrote Connors’ name on the money orders, and the address shown on them is a building that is allegedly owned by one of Nick Sinatra’s companies.

What we don’t know is whether Connors actually lived at the address someone wrote on the money orders, or if he lived where he was registered to vote. The lingering question is why would someone just pick Connors’ name out of the clear blue sky? Why were these money orders bought? Who bought them? Why were they delivered to AwfulPAC? Who solicited those contributions? Why were they made?

They money orders were allegedly hidden in a $4,000 contribution that AwfulPAC reported from Frank Max’s Progressive Democrats. Remember: AwfulPAC reported that $4,000 as one lump sum, but for some reason Max’s group didn’t. AwfulPAC also says that it received money long before Max’s group says it contributed it. It’s much easier to disguise a conduit contribution via money order than a check. But why didn’t they just give cash? The maximum amount of a postal money order is $1,000, and if you buy $3,000 or more in one transaction, you have to show ID.

The three money orders ($1,000, $1,000 and $500) were delivered to someone who deposited them — presumably M&T Bank has the surveillance tapes to show who that was; someone knows something.  But AwfulPAC made the decision that they wouldn’t disclose “Matt Connors” — or the actual purchaser of the money orders - as the contributor, but instead just lump it in with the other check being deposited that same day — from Frank Max’s Progressive Democrats. That was a deliberate decision to hide that money, and against the law.

The Buffalo News reports that Pigeon’s contributions even to Governor Cuomo are now under scrutiny, and Bob McCarthy writes that the authorities are questioning Pigeon’s financial ability to make the contributions he claims, given his tax liabilities. Was Pigeon a conduit for others’ money?

New interest is focused on at least two significant contributions or loans that Pigeon made in late 2013 – including donations of almost $100,000 to the caucus and $54,000 to Cuomo, especially a $50,000 contribution in connection with the governor’s 2012 birthday bash at Manhattan’s Waldorf Astoria Hotel.

Investigators have not suggested any wrongdoing on the part of the governor.

While Pigeon insisted in February that he maintained the financial ability to give almost $100,000 to a fund such as the WNY Progressive Caucus, questions still surround his donations. The fund was said not to concentrate on assisting major candidates for statewide offices, but for county legislator and Erie County sheriff.

“That’s a lot of money for a sheriff race nobody cared about,” said another source familiar with the investigation.

In February, Pigeon revealed his tax returns to The Buffalo News to indicate a more than healthy income in the mid-six figures. But the contention that he was financially capable of such hefty contributions occurred 11 months after he negotiated a tax repayment plan with the Internal Revenue Service as he was incurring even more tax problems with the federal government.

Investigators are now curious about his ability to finance such significant contributions to Cuomo and the caucus, according to several sources.

The source familiar with the investigation said Pigeon’s connection to the Cuomo campaign also interests investigators.

…loan made to a candidate or political committee, other than a constituted committee, by any person, firm, association or corporation other than in the regular course of the lender’s business shall be deemed, to the extent not repaid by the date of the primary, general or special election, as the case may be, a contribution by such person, firm, association or corporation.

So, it’s been two years and nothing has been paid back, so these are likely to be treated as contributions. Assuming the legality and applicability of AwfulPAC’s clumsy attempt between September 2013 — February 2014 to retroactively transform itself from a PAC into a multicandidate authorized expenditure committee, Pigeon’s contributions must be apportioned among the various candidates the committee supported, and the pro rata amount of his total contribution must be calculated as to each of the candidates.  He would clearly go way over the contribution limits himself for each of the candidates supported. (See Election Law §14-114(4).

Pursuant to that section, any authorized committee supporting more than one candidate is supposed to have a “formula based upon reasonable standards” to determine how to allocate a contribution to it among the various candidates that it supports.  The reason is to (supposedly) prevent a contributor (who has already maxed out to a given candidate, individually) to simply give more money to a multi-candidate committee, which in, in turn, gives money to the same candidate. That section only applies to party committees and to authorized political committees — it says nothing about “unauthorized” committees.  Which, of course, makes sense, since the unauthorized “independent expenditure” committee is not making “contributions” and is not limited for any amount.

Was AwfulPAC an independent expenditure committee, or an authorized committee? If the latter, this would have personal consequences for Pigeon, as well as Senator Tim Kennedy’s committee. Pigeon’s “loans” total $90,000, plus $25,000 from his “Landen Associates”, and Kennedy contributed $85,000. These were for legislative races, and those contribution limits are low indeed.

1. People can’t seem to agree what affect the impending statute of limitations on the alleged misdemeanors is having on state investigators. As far as AwfulPAC is concerned, its period of highest activity came in late August and early September 2013. Some sources are telling me that this looming deadline will hasten the filing of all relevant charges, while others are telling me that the authorities may be willing to let the statute lapse for the minor charges while they chase down the bigger fish. Time, I suppose, will tell.

2. There’s a lot of chatter about Niagara County. So far, only the Sam Fruscione campaign and AwfulPAC’s involvement in it has been mentioned, but people are steering me in the direction of the 2012 effort by Steve Pigeon, Gary Parenti (both of “PAPI Consulting”), and members and leadership of Laborer’s Local 91 to take over the Niagara County Democratic Committee. At that time, the county board of elections suddenly received a spate of angry phone calls from people saying that petitions for election to the county committee were being circulated with their names on them, and they never knew a thing about it. The calls were coming mainly from members of Local 91, and a few days later people suddenly called back to say, in effect, “never mind.” A scan of contemporaneous media accounts provides the outline of that failed effort.

3. The names of Steve Pigeon and several of his hangers-on keep re-appearing in documents and sites dealing with the alleged NXIVM “cult” in Albany. For instance,

In this civil complaint alleging conspiracy, civil rights violations, and other torts:

Defendant [John] Bartolomei was retained by the Bronfman sisters in order to encourage various governmental entities to bring criminal charges against, inter alia, the Plaintiff, Frank Parlato, Jr., Yuri Plyam, and Rick Ross. In conjunction with his work for the Bronfman sisters, Bartolomei, upon information and belief, oversaw the activities of, inter alia, Steve Pigeon and Byron Georgjou — and worked with Defendant Savino on a variety of NXTVM/ESP-related matters…

…NXIVM/ESP and some of the other Defendants have employed, directly and indirectly, a variety of political consultants and lobbyists in conjunction with their efforts to cause harm to the Plaintiff and other third parties. Also based upon information and belief, these political consultants and lobbyists have included, but are not necessarily limited to, the following: John P. Bartolomei/Bartolomei & Associates PC; Steven M. Boggess/Featherstonehaugh, Wiley & Clyne LLP; Alphonse D’Amato, Chris D’Amato and Joel Giambra/Park Strategies; Byron Georgiou/Georgiou Enterprises; Richard Mays/Maybeck, Inc.; Robert McLarty and Paul Neville/The Markham Group; Steve Pigeon/Underberg & Kessler LLP; and Roger J. Stone/STONEzone.com.

NXIVM/ESP and/or other Defendants hired Frank Parlato, Jr. (“Parlato”) to develop a “negative publicity campaign” in order to malign the Plaintiffs reputation in the Albany, NY area (This “negative publicity campaign” included billboard advertisements — and a “story” concerning the Plaintiff that was to be distributed to all of the homes in the Albany, NY area ).

NXIVM allegedly files harassing lawsuits against critics. A cultwatching website has this long compendium of information available about Mr. Pigeon’s litigious and deep-pocketed clients. In connection with the 2009 Pigeon-engineered / “Responsible New York” — Espada senate coup, LittleSis wrote this “Cult behind the Coup?” piece.

If Pigeon is a conduit for campaign contributions, it will be interesting to find out who’s behind the money.

Preetsmas Day. All the kids are waiting, and the cookies & milk are out.