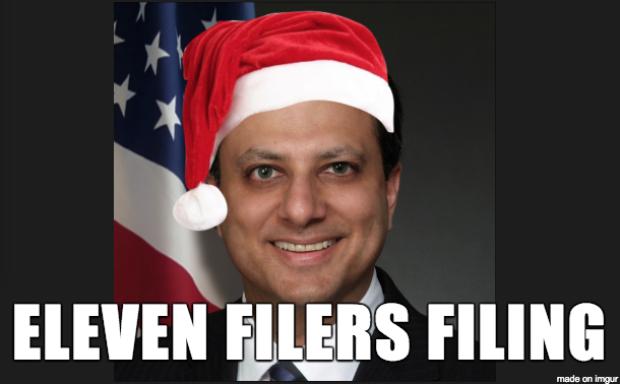 Earlier this week, I FOILed the CF-02 and CF-03 filings for Kristy Mazurek’s, Frank Max’s, and Steve Pigeon’s WNY Progressive Caucus or “AwfulPAC”. The CF-02 declares the type of committee being formed, declares who the treasurer will be, and where the money will be deposited. The CF-03 is a separate document filed by certain committees to inform the Board of Elections which candidates a committee will be supporting or opposing.

On August 1st, Kristy Mazurek executed the CF-02 to create the AwfulPAC. The NYS Board of Elections received this paperwork on August 22, 2014.

This document was all the PAC needed to get up and running.

As you know from previous days of Preetsmas, a PAC doesn’t really exist under New York State law — but a committee that files only this CF-02 document only has the right to raise money and donate it to political campaign committees. It is not allowed to undertake its own expenditures on behalf of campaigns (or to oppose them) unless it declares its intent to do so on a CF-03 form.

So it was that AwfulPAC raised almost $300,000 and allegedly spent all but $26,000 of it within the span of about a month. It did not, however, simply raise money and then donate it to campaign committees. Instead, it spent its fortune on behalf of candidates or to oppose candidates — hundreds of thousands of dollars on political mailers and TV ads.

Shortly after the media got wind of this new PAC, and it was spooked into revealing its existence, Mazurek tried again:

The documents in the PDF are out of order, and you have to scroll to the end. There, you’ll find that Towards the end of the PDF, you can see that in early September, Mazurek filed an amended CF-02 with the state board due to ”wrong type of committee selected”. Instead of “PAC”, she changed it to “9 — other” for a “multi-candidate committee”.

The cover letter blamed the “complex outline” and lousy advice from the telephone “help desk”. However, on September 11, 2013, the New York State Board of Elections returned this amended filing to Mazurek, noting an omission on its CF-02 and the complete absence of the required CF-03. Mazurek had filed as a multi-candidate committee without listing the candidates. She then went on to do so — but not until February 2014.

It was witnessed by David Pfaff. (Pfaff mentioned here, here, and here)

Isn’t it convenient, this nunc pro tunc retroactive legality? If I rob a bank but return the money before I’m caught, all is forgiven, right?

The AwfulPAC’s shiny new CF-03 — filed five full months after its period of activity - listed its intent as to various candidates as follows:

Town of Amherst (General only)

Not included in this compendium are two items:

1. Why would you support Dick Dobson in the general election and oppose only Bert Dunn? Why are you not also opposing Tim Howard? For a Democratic or “Progressive” PAC, wouldn’t/shouldn’t Howard be the primary target?

2. As predicted on day ten, note the absence of Niagara Falls Council candidate Sam Fruscione from this list. AwfulPAC admitted to Channel 2 that it produced the mailer for Fruscione, but he’s not listed as a candidate on its CF-03.

NB: On the Tenth Day of Preetsmas, I originally wrote that AwfulPAC hadn’t independently declared the expenses it made on Manna’s behalf. I was wrong; it had. I corrected it, and credit Ken Kruly for the catch. I should also note that Kruly also reported on Chris Grant’s federal disclosures for 2014 and 2015 are missing:

The United States House of Representatives Committee of Ethics requires House staff members who make approximately $120,000 or more per year (actually $120,749 in 2014) to file a Financial Disclosure statement by May 15 each year.

We’ll keep an eye out at Legistorm.

Channel 2’s Steve Brown is the only TV reporter chasing this story, and he had a very interesting piece Thursday night. He tried to talk to the owner of AwfulPAC vendor “Marketing Technologies”,

But owner Don Papaj had little to say when 2 On-Your-Side approached to get more information about the work WNY Progressive Caucus had done with them.

“I am very aware of the investigation,” said Papaj, ”I have been physically asked not to talk.”

Asking potential witnesses not to speak publicly is a fairly standard request by FBI agents, and the agency is at work on this investigation. So, it seems that Sinatra knows something about the investigation.

How many more days of Preetsmas are there, and what’s going on in Niagara Falls?