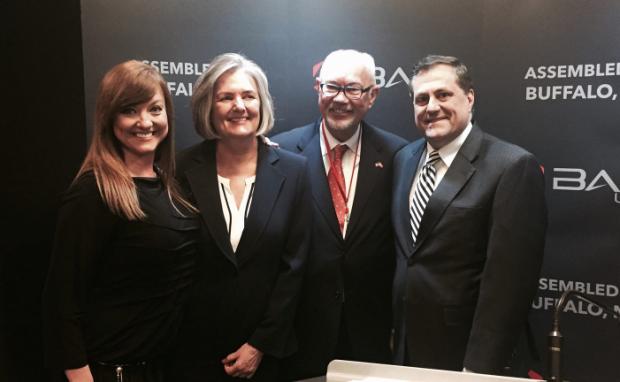 It bears repeating that the WNY Progressive Caucus was merely the latest iteration of a common Steve Pigeon modus operandi. He had been Pigeoning Democratic candidates for years while manipulating or cutting deals with whomever was convenient. Part of my antipathy for electoral fusion stems from Pigeon’s deft manipulation and marshalling of minor party lines.  He has conspired with Ralph Lorigo to steer the Conservative fusion Party line to his various candidates, and enjoys a close relationship with Tom Golisano, the founder of New York’s especially corrupt Independence fusion Party.

That’s why, for instance, Pigeon associate David Pfaff shows up as a vendor for the “Real Conservatives” PAC, which is controlled by Lorigo and based out of a funeral home in Hamburg which has contributed to Lorigo’s committee and also to Mickey Kearns.  That’s why a flush pro-Byron Brown PAC controlled by Steve Casey and based out of Casey’s home contributed to only one candidate — Conservative fusion Party candidate Joe Lorigo — in 2014 and 2013. So query why it took in $6,000 from Byron Brown’s campaign fund in the 11-day pre-General 2013 and another $6,000 from Brown in October 2013, while it only supported one Conservative fusion Party candidate.

None of this was new in 2013, but there was one major difference that tripped up Pigeon’s usual M.O. It was late August and early September that anonynous, no-attribution literature blasting then-incumbent county legislators Betty Jean Grant and Tim Hogues hit mailboxes throughout Buffalo. The mailers risibly accused Grant and Hogues of being right-wing Republicans, and praised their challengers, Joyce Wilson Nixon and Barbara Miller-Williams. I wrote at the time, “so long as people aligned with the breakaway Steve Pigeon faction of disgruntled nominal Democrats exist, there will be nonsense. It is ever thus.”

Under New York’s weak and usually unenforced election law, there is no requirement that the groups sending these sorts of mailers out reveal their identity or funding. “Paid for by” isn’t a requirement, and it protects shenanigans, instead of informing the voting public.

Generally, a PAC like the “WNY Progressive Caucus” would need to disclose to the Board of Elections where its money was coming from. But when these mailers hit in late August 2013, it hadn’t yet filed anything. The reason we found out about it was a FOIL request:

[Betty Jean] Grant on Friday charged that a rival wing of the local Democratic party is behind the anonymous ads. A request made under the Freedom of Information Act to the Postal Service has identified the permit holder on the mailings as the Western New York Progressive Caucus, headquartered on Doris Avenue in Lancaster.

That was Kristy Mazurek’s home, and she was listed as the group’s treasurer. Mazurek, at the time, had been a co-host of WGRZ’s “2Sides”, had helped direct the campaign of failed Comptroller candidate David Shenk, and then turned against Jeremy Zellner’s Democratic Committee and began running the campaigns of Pigeon-backed rogue Democrats Wes Moore and Rick Zydel in 2013. In August 2013, I called them the “emoDems”,

It should be noted that WGRZ 2Sides co-host Kristy Mazurek is [Wes] Moore’s and [Rick] Zydel’s campaign manager. Query why [her former co-host Stefan] Mychajliw would have felt the need to abandon the show when he ran for public office, yet the Democrat on the show feels no similar ethical obligation to do so, going so far as to attempt to ridicule an opponent on Facebook who wasn’t interested in going on the show.

Mazurek had taken to Facebook to ridicule Moore’s opponent Wynnie Fisher for refusing to appear on 2Sides. Yet why on Earth would a candidate appear on a show to be interrogated by her opponent’s campaign manager? It’s an insane proposition. Furthermore, Mazurek did leave 2Sides just days later. (There’s David Pfaff again, BTW):

And so, Mazurek Palinistically took to Facebook to issue a non-denial denial about the WNY Progressive Caucus’ literature:

Translation: After Shenk lost, Zellner didn’t hire/get me hired for something-or-other, and so I’m going to align myself with the people who are working to undermine and unseat him. Note that Mazurek doesn’t deny that she or her PAC sent out the anti-Hogues and anti-Grant mailings. She simply says the complaints “don’t have merit”. So, I replied:

Reply, (right under one from Erick Mullen, who did all of Jack Davis’ ads that relentlessly went after endorsed Democrat Jon Powers in ’08):

I have no idea what that means. So,

There was no reply, natch; I don’t think Ms. Mazurek knows what “meritless” means. Ditto her apparently erstwhile ally Pigeon, who said that the charges against him related to Mazurek’s PAC were “frivolous”.

These types of anonymous mailers come out all the time, and when anonymous, you can bet that the people behind it want to keep you in the dark. You should be insulted by them – they figure you’re an idiot; an ignoramus. Yet there’s no law that says they have to disclose who they are. So, if you’re outraged when your candidate gets anonymously and unfairly slammed by anonyms, you’re going to have to lobby Albany to demand that the Election Law be amended to (a) require that all campaign advertisements and literature clearly disclose who paid for them; and (b) institute a hefty penalty for any violations – penalties that are confiscatory deterrents.

Nasty people with unclean hands legally get to make electoral politics dirtier than it has to be. If Mazurek and the people behind the group for which she is treasurer think that Tim Hogues is a closet Clarence Republican and that Barbara Miller-Williams is the reincarnation of Franklin Delano Roosevelt, then they should disclose who they are.

The disgruntled nominal Democrats in league with Steve Pigeon might consider this, for instance: instead of working with Republicans and the fusion parties actively to undermine endorsed Democrats, why not convince the various and sundry committee members why they should vote for Frank Max or Mark Manna over Jeremy Zellner for party chair next time around? If you’re in league with the Conservative Party, why even pretend to be a Democrat?

But this time — in 2013 — the Pigeoning was discovered far earlier than Pigeon and Mazurek had expected, on August 30th. Because they were outed via FOIL request, they were forced to file disclosures just 11 days before the primary, and the disclosure was, at best, packed with fiction. Think about it — they clearly didn’t want to disclose who they were on the reams of literature they produced, and so long as people didn’t know who was behind it, they could defame opponents with impunity. This time, however, they were outed and came under a media microscope. Hogues and Grant filed complaints with the Board of Election, bolstered by former Assistant District Attorney Mark Sacha, and that complaint was referred to the state, which then referred it to state investigators, and it came before the Moreland Commission and into the hands of Preet Bharara.

And that’s the story of Preetsmas.