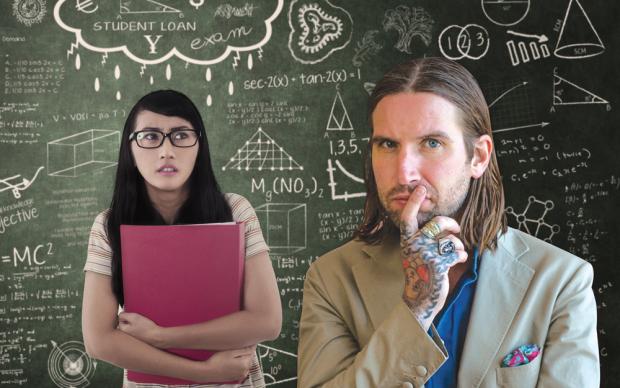 DEAR KEITH: My youngest brother is a junior in high school, which means it’s time for him to begin looking into colleges. Or is it? Of course my parents think so—it’s not even a question—but being a college graduate of the millennial generation who can’t find a job in my field and who is drowning in student debt, I’m inclined to deter my brother from this life path. I have no doubt that he’d be a great college student, however. He would. I was. But it’s more than likely that he’ll find himself in a situation very similar to mine when he’s my age. (I’m turning 26 next month. I’m hardly a wise old woman, but I’m also not naive about my situation.) I feel obligated to at least make my thoughts on the subject known, and even to go as far as to try and convince him to save himself the money and effort and to look into something vocational. I know my parents wouldn’t appreciate my angle, though. What should I do?—BACHELOR’S OF BS

BACHELOR’S OF BS: Jesus Christ, lady, save some room on this page for me. Just kidding—the more space you fill, the less I have to write, which means the sooner I can go back to lifting weights and kissing pictures of the American flag. It’s actually quite a shame you didn’t go into more detail about your October birthday plans. Had you even briefly summarized your intentions, I probably could have gotten away with submitting the emoji sequence of a turd smoking a cigarette with a question mark after it, and someone on Facebook would have reposted it as the definitive critique of our nation’s education system, and I could have further secured my position as “one of the funniest nephews my uncle has.” Now I’m obligated to put some thought into this. Kind of inconsiderate of you.

Unfortunately for your brother, his loquacious older sibling sought the advice of someone highly underqualified to answer this question, given that I was not only able to secure work in my field after graduating college but completely disavowed my degree one year later to pursue an unrelated dream that has since seen me go from catching scabies off of a dirty mattress in a zero-star hotel outside of Nashville one week to drinking champagne in a hot tub with two dudes from the band “Chickenfoot” overlooking the Vegas strip the next. (Sorry about the scabies, Chickenfoot.) My barometer of what should and should not be done in order to “succeed” in life is so skewed I honestly shouldn’t even be asked for my opinion on a new haircut, let alone be giving your relatives pointers on what to do after high school. But since I am deeply afraid of dying without positively affecting one single person, I’m going to give it to your brother hard and I’m going to give it to him fast, and he may not like it at first but he’s eventually going to loosen up and my tip will ease into him so deeply he’ll compare all future tips to mine. So please,  “Bachelor’s of BS,” avert your eyes. This is between him and me now.

Tip #1: Don’t listen to your sister. She’s angry at her own mistakes so her advice to you will be selfish.

Tip #2: Don’t listen to me either. I have worked harder than a Georgiadis liver for more than 15 years of my life, and in that time I have not filled out a single job application, so my advice to you would be wildly misinformed.

Tip #3: Don’t go out for seafood on Monday. Restaurants place their orders Tuesday morning and therefore you’ll be served the oldest food they’ve got, and your risk of acquiring scombrotoxic fish poisoning are drastically increased.

It was a very different world a mere 13 years ago when I had to decide whether or not to go to college. Information was rare and therefore valuable, and I felt comfortable shopping for jeans at Banana Republic. I went to college because it’s just what you did after you graduated high school. Well, that and acid. But now that the sum of all human knowledge since the beginning of time is accessible to anyone with a smart phone, I don’t necessarily see the benefit of digging yourself into a debt you will most likely never recover from. My advice to him would be that unless he is pursuing a career in law or medicine, where respectable credentials are a little more than just appreciated and going into student debt is but practice for when he’ll eventually need to work overtime in order cover a pricey cocaine habit, maybe take some time to be a student of the universe before the university. See if he can’t follow in the footsteps of life’s freer spirits first—the ones who have found joy without a degree. Maybe he’ll be happy hula-hooping in Days Park, or playing the violin in Days Park, or hackey-sacking in Days Park, or just fucking sleeping in Days Park and then simply walking away from three empty beer bottles and a sweater he left hanging in a tree. The world is his oyster. Sadly, it’s also always Monday.