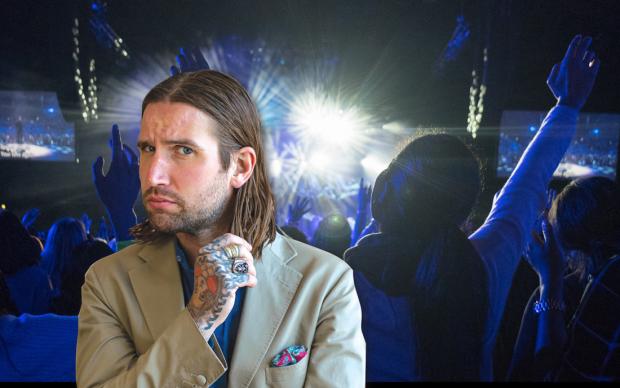 DEAR KEITH:  I am a young woman and I run a blog in which I discuss human sexuality. Being someone who has worked in both the sex industry and the music industry, there is one topic that I come across often—that being the “sex for notoriety” complex, or the mentality that sex with band dudes makes you famous. You are a full time touring musician I have come to know, love and respect for having a great deal of integrity. I assume that in your years of touring, you’ve noticed this phenomenon. What advice would you give to girls who have a propensity toward groupie-ism, or for that matter, band dudes who meet women who only want to have sex with them because of their status in a band?–SUZY CREAMCHEESE

SUZY CREAMCHEESE? Aren’t you the dancer that laughed me out of the Colonie Lounge last Monday for prematurely ejaculating in my rented tuxedo? I mean… uhhhh…. prematurely ejaculating in my friend’s rented tuxedo? Hahahah [hard, audible swallow] I assure you I don’t rent formal wear. Now, quickly moving along, whats this you say about me being a paragon of integrity? Oh yes, that I am one. Thank you for failing to notice 99% of the things I’ve done in public between the ages of 19 and 32, as it establishes a sturdy foundation upon which I can assume a false righteousness in addressing other peoples imperfections for this week’s highly anticipated installment of “Assisted Living.” Let’s dig in, shall we?

I’m not certain if what I’m about to discuss will provide any insight into the conundrum you face on your blog but The Public hasn’t paid me in months so this column is basically my pirate radio station now and I have no compunction highjacking it to serve my own agenda. The “sex for notoriety” complex you referred to and its offshoot culture of “groupie-ism” has been ubiquitous as of late—particularly underaged groupie-ism—and while I don’t know if it’s happening more or if music media outlets are just digging deeper into cold cases or if silent, fearful victims are now finding communal bravery where once they felt private shame, it is undeniably an epidemic that is threatening to reach pandemic levels according to my thesaurus. On a localized scale, these instances of inappropriate relations with underage girls as evidenced by bands such as “Lawst Profits” or “Frunt Porj Steppe” (names have been changed for legal reasons) are a despicable condition caused by the perfect storm of young musicians achieving a level of fame that our society lavishes upon someone completely independent of their talent paired with the unmonitored access to ones entire fanbase that the internet has made possible, but I cannot help but wonder as I read more and more of these stories of sexual solicitation of minors if–on a grander scale–it is now as much the cause of the music as music is the cause of it. Do some musicians become perverts or do some perverts become musicians? Do people still read this?

Before the internet, a young man picking up a guitar and saying he “wanted to be a rockstar to get chicks” was a naively adorable sentiment that warranted a tussling of his dirty hair by the calloused hands of his attentive father because the chances of someone breaking into the mainstream music industry was fuckin’ slim and they were actually being patronized. You had to not only have a unique talent, but a marketability unanimously decided upon by hundreds of music executives that found you by some act of divine intervention and would be willing to invest their money into you and sell you as their product. The stars had to really align which wasn’t completely impossible but in reality was about as feasible as becoming an astronaut or a Fly Girl on In Living Color. Fortunately for some and very unfortunately for others, that improbability does not exist today. Thanks to the self-marketing tools available online, the archetype of a wide-eyed child with a dream to be a famous musician is replaced by an awkward 17-year-old with a lip ring and a YouTube channel and his desire to “be a rockstar to get chicks” is now a terrifying threat that should have his parents alerting authorities. I have had more than a few conversations with touring musicians who have admitted that they don’t love what they play but it’s “what the kids want” and that is, in all my years of touring, one of the more dangerous things I’ve ever heard—and I have been drunk with two members of Pantera. If you’re in this game to give candy to kids, it’s a slippery slope.

I guess in a way this does bring me back to your original concern though I say that to convince myself of my writing abilities more than I actually believe it. The problem might not be the idea of “having sex for notoriety” because men AND women have found themselves strangely attracted to musicians for innumerable reasons since the first song was ever sung and nobody should be shamed for their sexual preferences or assumed to have ulterior motives. The real problem might instead be an unawareness of the trickery some people are capable of employing to reach a desired endgame, particularly in the world of a modern “celebrity” where a suburban kid who makes Vine videos of himself obsessively plastering his side part to his forehead with his sweaty hand while grocery shopping ends up on tour (?!?!) with girls throwing themselves at his feet. Is anyone surprised when it turns out he inappropriately handled his new found stardom? I can assure you that, typically, a dude in pop punk band with millions of Facebook page views who spends more time searching his own name on Twitter than practicing his craft is not the kind of teen dream who will validate anyone’s need for acceptance because they are still so desperately chasing their own. True stars—the ones I always want to bang, at least—were the kind of guys who would never give me the time of day because they were lost in music that made them famous. The ones who may have picked up a guitar “to get chicks” when they were young but found quickly that music was the only language they spoke and if a consensual sexual encounter between he and I results from him playing a killer set at “The Garbage Barn” in Dubuque, Iowa and I feel empowered that I had the prowess to entice the ukulele player of “Exquisite Prism” into my bed, who is to throw stones? The real trouble begins when young, impressionable girls assume that being on tour makes you a celebrity because the next thing they know they wake up in a bed next to a guy who claims he roadied for Soulpatch. An audience and an online presence might make someone “famous” but it does not make them esteemed and more often than not these people that are charging their supporters $50 for a meet-and-greet after their set are the same ones who will shamelessly exploit the fact that they’ve convinced them otherwise. To any musician reading this, you have a responsibility to be good to your “fans,” this scene is not a bait and shoot. And to anyone else who might be currently involved in an online relationship with a musician predicated on noodz, enjoy it if that’s your shit but don’t expect a bright future. The real lovers, as we all know, are in cover bands and they cant even afford cell phones.