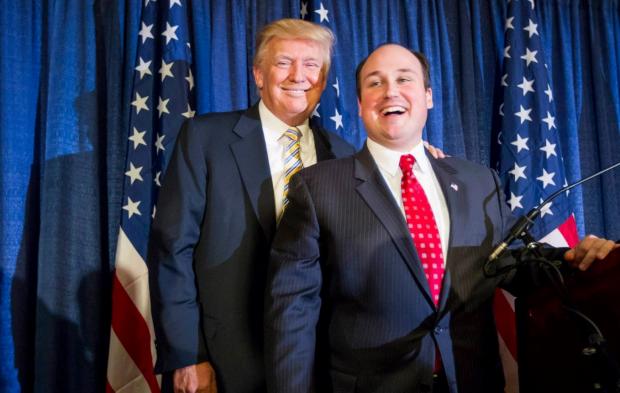 When the history of Donald Trump’s political rise and fall is written, the Erie County Republican Committee will feature prominently. Few political organizations have done more to enable him than it, and its official party organ, WBEN.

This entanglement dates back to the unsuccessful 2014 effort to convince Trump to run for governor against Andrew Cuomo. WBEN slavishly tripped over GOP apparatchiks jointly to promote and puff the “draft Trump” effort. Nick Langworthy and Carl Paladino were at the helm, joined by Conservative Fusion Party chair Ralph Lorigo and tea party Assemblyman David DiPietro, as WNY-based right wing leaders shuttled to 5th Avenue to deliver their pitch.

Trump decided not to run for Governor, but repaid his flatterers with a fundraiser appearance at Salvatore’s in Depew. Despite Trump’s reluctance to run for state office — possibly due to financial disclosure requirements not found in federal races — local Republicans remain among his loudest cheerleaders. It was reportedly Carl Paladino who led RNC jeers against Ted Cruz.

In the past week, as Trump has run through a gauntlet of gaffes and poorly considered and clumsily executed feuds with Gold Star parents and others, the Republican nominee has proven himself wholly unqualified to be President of this country. Perhaps to deflect from that, or maybe due to the GOP-led Erie County Water Authority controversy, the Republicans found what they though was a perfect nontroversy with which to distract attention — someone in County Hall mistakenly sent a political tweet late in the night, and quickly deleted it. That went nowhere.

All the while, Carl Paladino has quietly forwarded Trump propaganda to his vast email list, and Congressman Chris Collins has gone out of his way to parrot Trump in his battle against the Gold Star Khans, even at the apparent expense of veteran support. Collins’ weak emesis of Trump talking points is notable; while Paladino has no soul, scruples, or real accountability, Chris Collins is currently running for re-election in a district that is overwhelmingly conservative, but also respectful of our military and veterans. The Buffalo News reported that vets have noticed Collins’ defense of Trump’s defamation of the Khans, and most aren’t pleased. It takes a lot of stupidity and hubris for a conservative politician to so fundamentally insult a core constituency — one deeply rooted in decency and patriotism.

Collins’ support of the Trump defamation could very well be his undoing. After all, he’s not especially liked. He wins because of the (R) after his name in a district custom-designed for him. But as a person, he’s distant and aloof, and isn’t especially concerned with the affairs of average, middle-class wage earners. His personality is abrasive, his tone caustic. He’s as political as they come. As the Trump campaign reveals its core ugliness, this could have adverse effects on a party that already holds a widespread enrollment disadvantage in western New York.

It becomes more evident by the day that Donald Trump doesn’t really share western New York’s values. He’s an entitled billionaire with a cabbie’s demeanor, quite unlike most of us here.

As Republican politicians and donors watch the headlines about Donald Trump’s latest shocker, and as Trump’s poll numbers continue to sink, voters should really ask downticket GOP candidates their positions on what is quickly revealing itself to be a mere facade of a presidential campaign based around white nationalism.

Ask people like County Clerk Chris Jacobs what he thinks of Donald Trump, his positions, and his antics. Go read this insightful and revealing interview with a pretty despondent Republican intellectual about what’s happening not only to the Republican party, but the conservative movement specifically. Donald Trump is not an accident or aberration — he is the culmination of a half century of movement conservatism. He is bold enough to lay it all bare.

When the history of Donald Trump’s political rise and fall is written, subsequent generations will be asking you what you did about it.