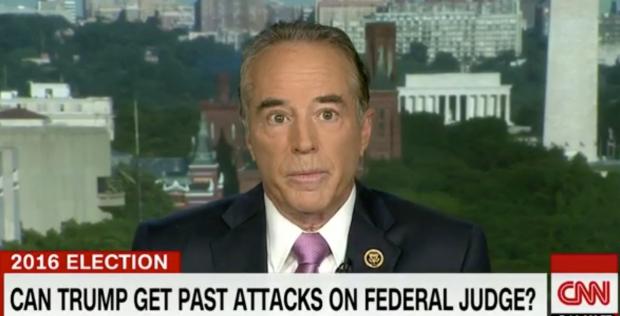 CNN’s Chris Cuomo interviewed cross-examined Congressman Chris Collins over Donald Trump’s outrageous and unconscionable attacks on a judge overseeing one of the Trump University fraud cases. This was expertly done and truly leaves Mr. Collins looking not just foolish, but juvenile — he is truly reduced to the mean-spirited schoolyard bully he is, and it is glorious to see.

Maybe Nick Langworthy should worry less about “Rust Belt DeBlasios” and worry more about the depths of depravity to which those in his own party — Donald Trump, Chris Collins, Carl Paladino, Rus Thompson, Angela Wozniak - have descended.

CHRIS CUOMO (HOST): Two days ago your man was being called a racist by GOP leaders. You know — I respect your decision to try to spin us away from it, but it’s very much, not just in the news cycle, but it’s a reality there.  That’s why we saw Donald Trump do something, whether on his own accord or pushed by staffers, to give a speech on a teleprompter, which we know he hates. Right? He insults people for using the teleprompter, but there he was, saying ever word he was told to say as he was told to say it. The question becomes, how do you move past this? Do you think Trump should apologize?

REP. CHRIS COLLINS (R-NY): Donald Trump has moved past it. As he said, he’s done talking about. We’re going to be doing a contrast to Mrs. Clinton as we move forward —

CUOMO: Should he apologize? Because the fact that Clinton has trouble, which nobody is arguing, right? Her unfavorables are every bit as high as his, doesn’t take this away. Right? When you accuse me of something, I can’t say “yeah, but what about that other news anchor, he stinks even worse.” That’s not a good defense for myself. It shouldn’t be a good defense for Trump. Do you think he should apologize? Would you have in the same situation?

COLLINS: I would not tell Donald Trump what to do. He’s run the most brilliant campaign that’s ever been run in the history of politics. Again, I’ve moved on it, others supporting him have moved beyond it, so at this point no, I’m not going to tell Donald Trump to apologize. I wasn’t in this situation, so I don’t really have a thought in that regard, but I would say as we’re now — we’ve coalesced around Mr. Trump, and we’re taken the fight and contrasting his message of securing the borders, getting the jobs back from Mexico and China.

CUOMO: The problems are obvious. The country has challenges. The question is, who’s the right person to deal with those challenges? Temperament goes to that. What people are using this situation as is, Donald Trump not only said things about a judge’s heritage that were out of line, but he said things about the case that weren’t true to advance his own cause, things that even his own lawyer disagrees with. Don’t you think that’s something he should deal with?

COLLINS: Well, America is looking for a change agent. They’re looking for a fighter, somebody who’s spent their life winning, creating jobs. So, no, I think the temperament and the personality of Donald Trump is exactly what America wants. We don’t want status quo, we don’t want somebody wordsmithing every word, doing a focus group as they decide what language to use. They want somebody who speaks directly to America, that says we’ve lost our way, it’s time to make America great again. It’s time to put America first and stop the nonsense of China and Mexico stealing our jobs.

CUOMO: But Congressman, if you want to put America first, you’ve got to put its institutions first and you’ve got to put its values first. Going after someone for their heritage when they’re a judge that nobody has ever assailed before on that basis? Not an American value. Going against your case and saying things happened in it that were bad for you when that’s not true and you’re president of the United States? That’s not an American core value you want put forward. Why don’t you think he has someone like you, right? A respected surrogate come forward and say, “you know what, he shouldn’t have said those things about the case, he’s upset that he has a case against him. That’s normal. He’s a fighter. He went too far, he brought in the man’s heritage, he shouldn’t have. He respects judges, he apologizes.”

CUOMO: How were they misconstrued though? That’s what I don’t get. He said the judge was unfair. The judge was not unfair, if you look at the rulings.

COLLINS: Chris, I would disagree. You and I don’t know the details of the case.

CUOMO: I do know the details. I do know the details of the case. We’ve been studying this for weeks now, what’s going on with Trump University. Every ruling that you look at, when lawyers review it — forget about me as a lawyer. When lawyers review it, they say, “this judge was following it.” And those lawyers, Trump’s own lawyer says his judge is doing his own job. The biggest ruling in the case was continuing the case, buying Mr. Trump more time to campaign and not deal with the litigation. These are all things that were in his favor, and he says the judge is biased. Is that right?

COLLINS: In his opinion the judge is biased, and I’m not going to speak for Mr. Trump. I will say I’m very happy the judge has decided to hold this in abeyance until after the election. We need to put the distraction of this case behind us. I believe, as of his speech two days ago, we have now done that. But when you want to talk about someone being honest or not, look at Mrs. Clinton and her comments on Benghazi, look at her comments on the email, look at the Inspector General report —

CUOMO: But we had 11 hours of testimony on Benghazi to vet Clinton, right? And what congressmen dream of, you had a whole day to beat her over the head with her own words. Here you’re saying, “well, let’s not do that. Let’s move on right away, let’s not deal with what he said about this case.” Is that a fair appraisal?

COLLINS: Well, because we need to talk about the character flaws of Mrs. Clinton, who is not honest. She cannot be trusted. She’s shown bad judgment again and again and again.

CUOMO: But why would I see your candidate as the better choice, if I’m a voter, if he won’t deal with his own situations and you just talk about the other candidate?

COLLINS: I think the issue is plain and simple. Do you think the country’s going in the right direction?

CUOMO: So Congressman, this is a tough question for you, but as you know, I know you well and I know what you stand for and what you do in New York on a regular basis. You’re saying to me that you don’t care if Donald Trump unfairly maligned a federal judge and misstated the situations in a case that includes fraud for his own benefit? You don’t care?

COLLINS: Well, that’s your take on it. My take on it is, Donald Trump with his actions has shown he is not a racist. You look at his hiring practices —

CUOMO: I never used that word. I don’t even see being Mexican as suggestion of race. What I’m saying is, he brought the man’s heritage into it. He talked about what the judge did in this case, which is demonstrably untrue. His own lawyer disagrees with him, and you’re saying “I don’t care.”

COLLINS: I’m saying Donald Trump is the right individual to be the next president of the United States.