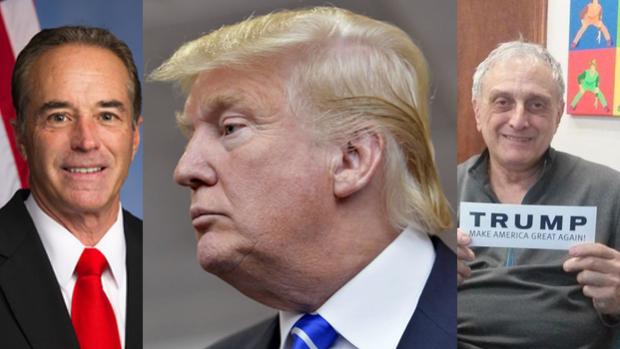 Representative Chris Collins has never been a thoughtful politician, and has always been something of a hypocrite. He’s a tough-talking Spaulding Lake elitist millionaire who spent his time as County Executive cutting services to the middle class and poor to pay for things like his multi-million dollar Six Sigma experiment.

He’s also a political opportunist, willing to back a neofascist charlatan like Donald Trump for his own political gain. It’s a gamble, for sure — but it’s a calculated risk that takes Collins’ own ambitions into account, at the expense of his constituents. Remember that Collins is neither leader nor follower — he is an anti-democratic tax-raising bureaucrat’s bureaucrat. This is a guy who, when a majority of the representative County Legislature overrode his veto, simply tried to declare the override, “null and void”. With those dictatorial bona fides, maybe Collins has more in common than Donald Trump than we thought.

In the couple of weeks since Collins officially boarded the Trump roller coaster, we’ve come to find out more about how and why it happened. Specifically, we can turn to this interview with Collins that appeared in the Huffington Post. Before you yell, “smear job” and “nonsense” notice that this story transcribes actual questions posed to — and answers given by — a sitting Congressman from WNY.

I know Carl Paladino has been aggressively pushing all of you to endorse Trump. And I know he has indicated he will start ‘attacking’ NYers who don’t endorse Trump. You may or may not care, but he does have a formidable email list.

So, here’s a sitting Congressman sending a text message to other sitting Congresspeople, playing “good cop” to Paladino’s “loud and obnoxious cop”. The HuffPo interviewer catches Collins at first denying that Paladino had anything to do with his Trumpdorsement, before acknowledging quite clearly that this was all about Paladino.

Collins told HuffPost that his role between Paladino and the other New York Republican members was brokering a sort of detente, where Paladino would lay off pushing for an endorsement before the primary filing deadline and Collins would remind his colleagues that, once the deadline had passed, Paladino would be back at it.

This is about appeasement. If you want the bully to be quiet, you don’t confront him or ignore him — you give him exactly what he wants. Collins went on to explain his rationale for backing Trump,

He’s the only chief executive, not chief politician.

Collins evidently agrees when Trump says that “wages [are] too high.” He was then confronted about Trump’s more ridiculous and sexist comments, and the exchange went like this:

When asked whether he has any concerns about some of Trump’s more egregious behavior and remarks, Collins came up with an explanation that was downright Trumpian.

“What I’m going to say is he’s been misquoted many times,” Collins said.

When pressed that he’s clearly been accurately quoted many times, saying horrific things about women and minorities, among others, Collins said, “Well, he’s also been misquoted, and they’ve taken things out of context.”

Pressed about Trump’s statements on women, Collins interrupted the question and blurted out, “I’m saying actions speak louder than words!”

Trump’s stance on defense and jobs are taken from the same playbook of dominance politics that informs Trump’s entire disjointed series of thoughts that make up his platform. If you can set forth a narrative portraying America as a loser who is being humiliated and defeated by everyone at every turn, then you make your central thesis about turning the tables and getting back at our perceived tormentors.

Carl Paladino, Donald Trump, and Chris Collins are three New York politicians who are allies because of their patent similarities. They are millionaires. They believe that the very wealthy are victims of the poor and middle class. They appeal not to our better angels, but to our darkest prejudices. They focus on what divides us.

Normally, Kasich would be the perfect New York Republican pick. Unlike Trump and Cruz, he’s not a lunatic. Unlike Trump and Cruz, he’s as close to a political centrist as you’re likely to get out of a contemporary Republican nationwide candidate. Having just finished seasons 3 and 4 of House of Cards, I’m amazed that the real-life 2016 is crazier than the soap opera version.

Kasich, however, isn’t going to win New York because Donald Trump is a reality TV icon, a right-wing hero, and a guy with whom downstate New Yorkers have been familiar since Abe Beame was mayor.

Congressmen and women, who have been duly elected to serve and represent a particular constituency, have earned the right to back whomever they want for President of the United States. But this isn’t just for electeds — under normal circumstances, inter-party squabbles are held in abeyance for the purposes of Presidential primaries, because people recognize each other’s right to vote their conscience. Just because you support Sanders over Clinton — or vice-versa — doesn’t make you any less of a Democrat.

But Paladino and Collins are teaming up to make the New York GOP primary a litmus test for the Paladino/Palin wing of the tea party, which in New York makes up a minority faction of a minority party. They’re loud, but they’re ineffective — don’t believe me? Ask Senator Kevin Stocker. They are a paper tiger, and any self-respecting Republican elected official in New York should feel perfectly comfortable rejecting these empty, childish threats from political gangsters. Congresswoman Elise Stefanik, a Harvard graduate with solid GOP credentials, should feel perfectly comfortable ignoring Collins’ and Paladino’s Trump protection racket.