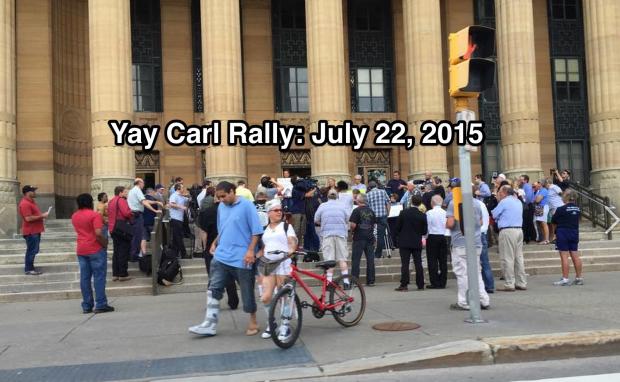 With respect to the headline, Betteridge’s Law applies.

The tea party held its “yay Carl” “rally” on the steps of City Hall Wednesday, and here is the transcript of Jul Thompson’s remarks. Allow me to highlight this section:

The legend goes, that among his many other colorblind activities like employing scores of African-Americans, Carl Paladino is the primary financial support to an inner-city black church that ministers to the homeless. I wanted his campaign for governor to share this information after a liberal jihadist fabricated some emails and charged Carl with racism. But I can’t provide details, because as a humble man, Carl didn’t really want this information public.

I am that “liberal jihadist”. This is the second recent occasion on which Ms. Thompson has directly accused me of “fabricating” the Paladino email cache that my colleagues from WNYMedia.net and I released in 2010. Since she has repeatedly made that false accusation, it is incumbent on me to rebut it.

First of all, let’s re-examine Paladino’s own words. He never denied sending and forwarding the emails.

The day the emails were released, Paladino’s own campaign released this statement:

Carl Paladino has forwarded close friends hundreds of email messages he received. Many of these emails he received were off color, some were politically incorrect, few represented his own opinion, and almost none of them were worth remembering.

We’re not surprised the political establishment feels threatened by Carl’s drive the take Albany back for taxpayers. Our campaign won’t be wading through the details of what is just another liberal Democrat blog smear.

No one said the emails weren’t his. No one said he didn’t send them. No one accused anyone of “fabricating” them.

Finally, if Paladino didn’t send these — if I ‘fabricated” them, why did he apologize for it in 2010?

REPORTER: Do you think it was appropriate to send out some of these emails

THOMPSON: I just said that, didn’t I? No it wasn’t. Was it appropriate for him to forward these things on? No.

Paladino said he did not create the emails, but merely forwarded them to friends before he became a candidate.

Paladino tried to explain himself during a brief appearance on the Fred Dicker Show on 1300 AM in Albany Tuesday Morning.

DICKER: Why did you pass this stuff along. Why didn’t you send it back and say, ‘return to sender? It’s too ugly.’ We only have about 40 seconds.

PALADINO: Well, you know, over the years, when your friends are sending you emails, ok, that are funny at the time, okay, that are not intended to be anything other than a humor amongst friends, that you re-send stuff. And I did that.

PALADINO: … And I acknowledge that.

DICKER: … use of the word n****r humorous? I mean, that’s a pretty horrifying word these days. And understandably so, you know.

PALADINO: Well, they… well…. at the time and moment, okay when you see Ronald Reagan dressed in drag or you see a, uh (RADIO BREAK MUSIC PLAYS), uh, Obama, okay, picture…

PALADINO: Whatever. That kind of stuff is going to happen, but that has nothing to do with the campaign.

“I regret having been somewhat careless in the way I re-sent e-mails that I received. I didn’t originate any of these e-mails. Whenever I received an e-mail that was political, off color, politically incorrect , whatever, …I sent it to a very specific bunch of friends who somewhat enjoy that sort of humor. “

Certainly someone innocent — someone who is a victim of a vicious fabrication — would never, ever apologize for something he never did and by which he was being victimized. Jul Thompson is, simply put, a liar.

Finally, if you doubt their authenticity, here is one of the emails that Paladino forwarded, and it specifically sent this video around: purporting to be footage of the “Rehearsal for the Obama Inauguration”, it depicts African tribesmen dancing in the jungle. To call this racist and vile would be an understatement.

Here is how that email was forwarded to Paladino (click to enlarge images): Here is Paladino forwarding it out to his friends and colleagues:

Here is the reply from one of the recipients:

Want to verify the authenticity of these emails? Why not contact one of the people who received it. In 2010, I redacted that information.  Now that an ally of Paladino’s has twice accused me of fabricating them, I must defend against such falsehoods.

Here’s another. It’s making fun of motivational posters, and I omitted the pornographic ones, but kept in the ones that use the word “fag”, denigrate black people, and mock those “damn Asians”. When these were first released, part of the Paladino campaign’s strategy was to attack us, the people who published these emails for being liberal bloggers. It was true, after all — we were liberal bloggers. However, we never would have deliberately manufactured something out of whole cloth just to attack Carl Paladino. We have strong opinions, sometimes aggressively expressed, but would never fabricate some grand, international fraud.

Why would some tea party activist from some far-flung exurb be so invested in the travails of the Buffalo school district, with which she has no true interest and in which she has no genuine stake? On the one hand, this is sheer cultism at its core, protecting her Carl against the mean people; as if Carl couldn’t do it himself and needs her help. On the other hand, she agrees with the underlying goal, which is creating havoc in the public school to bring about political control and/or privatization. The target is the public school system in America, writ large.