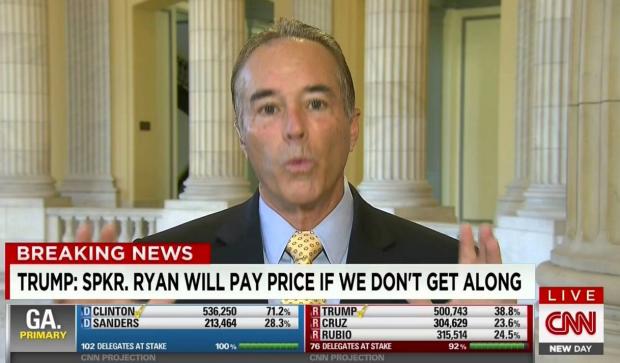 My Congressman, Chris Collins, has endorsed Donald Trump. Since then, he has become more of an embarrassment than ever before. This weekend, he wrote an un-comical op/ed for that liberal stalwart, the New York Times.

Americans are angry. I hear it from the former factory workers who lost their jobs to other countries because of bad trade deals, the veterans who wait months to see a doctor at a Veterans Affairs hospital and the small-business owners who are struggling to stay afloat because of the Affordable Care Act’s crippling regulations. The professional politicians they trusted and supported have repeatedly sold out our country in favor of special interests and the status quo. Finally, millions of Americans are saying, “Enough is enough.”

The VA is understaffed and underfunded by the Republican Congress. (Can’t have big government). More Americans have quality, real health insurance than at any time in history; not dying is a “special interest”. Manufacturing? Collins should know as well as anyone that it’s been automating or shifting overseas for generations.

I see the failures of career politicians in the experiences of the hardworking men and women in Western New York whom I represent in Congress. The safe manufacturer SentrySafe, which once employed hundreds in the Rochester area, will close its doors this June and shift much of its operation to Mexico. That means the loss of good-paying jobs because our state and national leaders do not know how to encourage businesses to stay and grow in the United States.

When given the chance, Chris Collins — a man who has been in politics for almost two decades - manufactured his bike balance thing in China. Not in western New York.

America cannot afford another professional politician residing in the White House. We need a leader who has faced tough real-life situations before, and won. As Republicans prepare to vote in the New York primary on Tuesday, I hope they will send a resounding message that they believe Donald J. Trump is that type of leader.

Over the past several decades, Mr. Trump has built a family business into a network of highly successful enterprises. One of the many reasons Americans are rallying behind him is his record of success and commitment to taking the lessons he’s learned to the White House. When he talks about being a president who would create jobs, win negotiations and stand up to enemies, people believe him because he has done it before.

To fix the mistakes made by President Obama, our next president needs to speak frankly about the problems that exist, explain how he or she will correct them and have the fortitude to take necessary actions, no matter how unpopular they would be with Washington elites.

Get that? You can fix bad policies and systemic failures by “speak[ing] frankly”. He will build a wall and make Mexico pay for it. He will drop nuclear bombs on “ISIS”, without regard for innocent civilians who are vaporized. He will commit torture, abrogate the Geneva Conventions, and murder terrorists’ innocent relatives (but likely not, by example, the parents of Timothy McVeigh, who slaughtered 168 innocent men, women, and children). Chris Collins endorses all of it.

Yes, being a blunt-spoken political outsider gets a nominee only so far. But Mr. Trump continues to win because his message and his ideas for fixing America are resonating with voters. He is committed to securing our borders, taking back the manufacturing jobs that have been stolen from the middle class by Mexico and China, and standing up to enemies threatening our way of life. These are things people in my district care about. His demand that foreign countries stop cheating on international trade is especially welcome in Western New York, a region devastated by the North American Free Trade Agreement and other poorly negotiated trade deals.

“Red China Chris” Collins is a political insider who has done nothing to abrogate or challenge bad trade deals. On the contrary, he outsourced his own product to China, because he could and because it was cheaper than employing western New Yorkers to do it.

Even some of his supporters don’t agree with everything he says. I believe his plan to deport the 11 million illegal immigrants in the United States is unfeasible, and his proposed temporary ban on Muslims entering our country will not end radical Islamic terrorism.

“Avoidable humanitarian crisis of Biblical proportions” can now be euphemised into “unfeasible”. Make no mistake — the rounding up, detention, and deportation of 11 million men, women, and children will be nothing more than contemporary concentration camps. They’ll be Dachau and Omarska for the 21st Century. Banning Muslims — even American Muslims — from entry or re-entry isn’t just something to avoid because it won’t work, but because it’s fundamentally illegal, unconstitutional, stupid, and ignorant. Trumpisti are quick to say it would be “temporary”, but that’s not true; something “temporary” has an expiration date. The proper word is, “indefinite”. Chris Collins endorses all of it, despite his weak and mealy-mouthed protestations.

However, there is something to be said for a candidate who is willing to put forward proposals to protect our nation, rather than skirt uncomfortable issues — as President Obama and Hillary Clinton all too often do. His lack of political correctness shows that he is independent and understands the things people care about. Unlike career politicians who take policy positions based on their fear of losing elections or angering deep-pocketed special interests, Mr. Trump is accountable to no one but the voters.

Republicans recognize that the remaining Republican candidates have all advanced conservative solutions to the problems our nation is facing, as evidenced by the record voter turnout we have seen. But while Senator Ted Cruz and Gov. John Kasich both have strong visions, neither possesses Mr. Trump’s proven negotiating skills or ability to enact real change.

Donald Trump’s negotiating skills must explain why his name is still up on junk-bond-financed, twice-bankrupted Trump Taj Mahal, the 13th best hotel in Atlantic City, according to Tripadvisor.

I know firsthand how important Mr. Trump’s private-sector know-how is to improving the way government operates. I spent my career buying and rebuilding distressed companies, which created and saved hundreds of middle-class jobs. I put that experience to use in 2007 when I ran for executive of Erie County, a region that had been devastated by losses in manufacturing jobs.

In office, I made the necessary tough choices and turned a nearly bankrupt, debt-ridden county into one with a surplus. I believe Donald Trump will achieve the same results for America.

Shorter Chris Collins: Trump needs the assistance of an imposed control board to lead.

Americans have a chance to set our country back on course and restore the possibility of the American dream for our children and grandchildren. For too long the political class has denied everyday Americans a real voice in government. This election, voters are finding a leader who is listening to them over the clamor of Washington special interests, and voters are speaking loud and clear. They want a leader like Mr. Trump; a chief executive, not a chief politician.

Here’s a news flash for Red China Chris: you are a member of the political class, and you never schedule or attend events where you might have to deign to hear from people who don’t agree with you and buy into your Spaulding Lake shtick. Your policies were so horrible for western New York’s middle class that you were ejected from county office after one unnecessarily turbulent term. You are an embarrassment to your constituents, to your town, and to yourself.