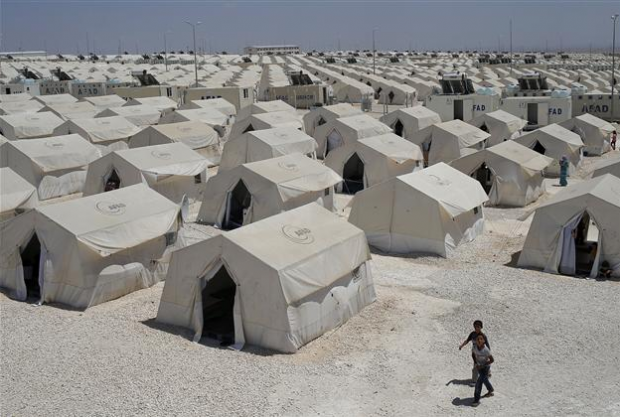 Building a wall along our border with Mexico — and getting Mexico to pay for it — is one of Donald Trump’s signature campaign promises, and his biggest applause line. He went so far as to explain that he would halt the flow of remittances to Mexico from the United States.

The rounding up and deportation of 11 million undocumented immigrants is another promise that Trump’s supporters really get behind, and the ovations keep coming.

Donald Trump will end birthright citizenship, without which I would have been born a citizen of the Socialist Federal Republic of Yugoslavia, despite never having lived there.

Trump’s indefinite, total ban of Muslims from entry to the United States is also one of presumptive GOP nominee’s big, bold, forward-thinking ideas for America. He now says it’s just a “suggestion”, but that’s got to be a lie. That proposal is right there on his campaign website. From Trump’s own statement, it is not temporary, but indefinite. The ban is not a suggestion, but a platform plank. He purports to make exceptions for his Saudi friends or the Mayor of London, but it says, “total and complete shutdown”. It would (a) apply to American citizens of the Muslim faith; (b) be pretty difficult to enforce — how do you tell if someone is Muslim? Their name? Their nationality? A modern interpretation of the works of Arthur de Gobineau?

To my mind, if you are a lawmaker who has endorsed Donald Trump, you endorse all of these policies, positions, and proposals.  Every one of them. If you are, say, Representative Chris Collins (R-NY), then you have bought into all of this; you co-own it. This is especially true given his status as the co-chair of Trump’s “House Leadership Committee”, which is an irony and a misnomer if ever one existed.

In the Buffalo News, Chris Collins — who has become Trump’s most high-profile Congressional puffer — Trump’s “man on the Hill” — is now attempting to do something quite elaborate and complicated that he should be wholly foreclosed from doing. He is trying to pretend that Trump’s controversial proposals aren’t real. They’re make-believe. Let’s hop on Trolley and see what King Friday has to say:

I have called it a virtual wall. Maybe we will be building a wall over some aspects of it; I don’t know.

Of the identification, detention, and deportation of 11 — 12 million men, women, and children:

I call it a rhetorical deportation of 12 million people. They go out that door, they go in that room, they get their work papers, Social Security number, then they come in that door, and they’ve got legal work status but are not citizens of the United States, so there was a virtual deportation as they left that door for processing and came in this door. We’re not going to put them on a bus, and we’re not going to drive them across the border.

Of Trump’s indefinite, total ban on Muslim entry to the United States:

[Collins] was encouraged that Trump recently said on Fox News Radio that his proposal for a temporary ban on Muslim immigration was “just a suggestion.” The congressman said that he disagrees with an overall ban on Muslim immigration and that he thinks Trump may have oversimplified his views on the issue to some extent. “When I hear the word ‘Islam,’ it doesn’t necessarily mean terrorist extremists,” Collins said. “It’s a religion. That’s me, and that’s why I say I don’t agree with the way he has said it.” Collins said he thinks that what Trump meant to say was that Syrian refugees who are undocumented and who can’t pass an FBI security check because of their lack of documentation should be banned until the FBI director can say they are safe to admit to the United States. “I disagree with his broad-based ban, but I am comfortable that this is what he really meant,” Collins said.

This is insanity. We are through the looking glass. Donald Trump has finagled for himself what is bound to be the Republican nomination for President in part due to his tough talk on Muslims and immigration, yet he doesn’t really mean it? It’s all “virtual”? This is such utter, unmitigated, unfiltered bullshit.

Donald Trump doesn’t get the support and ovations based on “virtual” deportations out a Congressman’s door and back again with temporary work papers. Trump has sold these people the idea of an anti-Mexican, anti-Muslim pogrom, and by God, a pogrom is what these people want. Because the entire ethos of Trump’s campaign has been based on victimhood and resentment.

Collins brushed those differences away by basically saying he doesn’t look at Trump’s campaign promises as promises. They are, he said, merely the opening offers in a series of policy negotiations.

“Sometimes Donald says some absolutes,” Collins said. “And a CEO saying that means, ‘Challenge me on it. Let’s have a debate on it.’ … That’s Donald’s background. It’s not people hanging on every word, every nuance and saying that you can never modify what you said.”

Yes, but which CEO basically calls for the identification and rounding-up of 11 million men, women, and children, then detaining them in Arpaio-style camps near our Southern Border prior to deportation? Aside from costing half a trillion dollars, aside from it doing unnecessary harm to our GDP, and aside from it bringing about a humanitarian crisis of Biblical proportions, and aside from it being something not seen since 1945 in Northern Europe, (or 1995 in Southern Europe), and aside from the way in which the optics of this thing will absolutely destroy America’s standing in the world for centuries, what “policy negotiation” is all this meant to “open”?

I suppose Collins realizes that this whole Trump thing isn’t a sure bet, and he wants to hedge a bit so it’s not too awkward when he bumps into a Muslim physician at the Spaulding Lake Club one warm summer evening. Perhaps Collins remembers that a lot of his constituents are farmers who rely a great deal on migrant labor — documented or not. Either way, you have a Presidential candidate who got where he is on domination politics and a contemporary version of the “stabbed-in-the-back” mythology. Just tell people that their misfortunes are the fault of Mexicans or Muslims or Chinese or Indians, and that we need to do something about the people who so took advantage of us. This is extraordinarily dangerous and ugly territory, but Collins is happy to hold Trump’s hand through it.

In the end, either Trump is a liar, or Collins is a dupe — maybe both are true (probably). But the next time you hear some loudmouthed right-wing lunatic express admiration for Carl Paladino or Donald Trump, and their willingness to “say what everyone else is thinking”, remember this fundamental truth:

The giveaway was this bit from Trump about [NYT Reporter Serge] Kovaleski: “He should stop using his disability to grandstand and get back to reporting for a paper that is rapidly going down the tubes.” That’s what Trump’s fans think is going on all over the place. The blacks, the Hispanics, the disabled, the immigrants, the poor: sure, they’ve got problems, but who doesn’t? They’re just making a big deal out of it in order to gain sympathy and government bennies that the rest of us have to pay for. And the worst part is that you know what everyone else is already thinking about this claptrap, but you get in trouble if you say it. Republican candidates have tapped this vein of resentment for years, but usually in coded ways that won’t get them in too much hot water. Trump just dives in. Other politicians may have paved the way, but it’s Trump who’s finally figured out how to turn it into electoral gold.