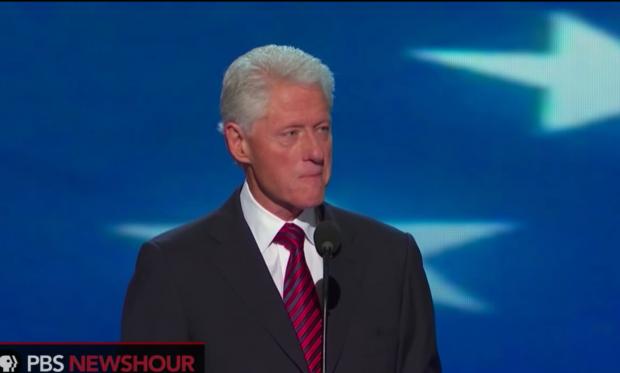 No one went to Philadelphia.

With the general exception of the three hours of straight morning news, WBEN spends the remaining twenty-one hours of every day deriding anything they label progressive (they prefer “regressive”), and heaping hatred, scorn, and derision on anyone with a (D) after their name, and anything that they might believe or opinion they hold.

Last night I watched Bill Clinton give a truly unique speech where he told essentially a folksy story about his life together with Hillary Clinton, and the work she’s done, and things she’s accomplished. It was a speech only he could have given, and he delivered it in a truly compelling way. It was a reminder of what a powerful communicator he could be, and why people liked his Presidency so much. He also argued that Republicans were running against a cartoon that is two-dimensional, and completely manufactured.

No. No, that’s not how a putative news outlet is supposed to act or behave. If you want to have Bauerle or Sandy Beach say dumb, biased stuff like this:

That’s all well and good, if that’s the image you want to convey. But the News station’s Twitter account — call it common sense, call it best practices — should be impartial. If Tim Wenger or one of his hires wants to snark away on Bill Clinton during the Democratic National Convention, knock yourselves out.

Wait, I’m confused. Hasn’t their guy been president for 8 years? Why do we need a “change maker” if everything’s going so smoothly?

Because of this this completely naked station-wide bias, it’s time for Democrats to boycott this station; perhaps all local Entercom stations. Why feed their ratings? Why make money for them? They’re so deeply in the tank for Donald Trump, let them pimp him all they want — without our help.

Why give them the satisfaction of playing make-believe about impartiality or objectivity during those paltry three hours where they at least make an effort to pretend. Anything less at this point is to reward the fact that WBEN isn’t our station. They aren’t our people. It has a clear and palpable bias, and everyone from Ken Kruly to Bruce Fisher to Bruce Bryski to Jeremy Zellner to Mark Poloncarz should stop returning their calls, stop calling in, stop appearing, and stop having anything to do with WBEN until it treats Democrats like human beings. Geoff Kelly — stop going on Hardline.

For whoever was running that WBEN Twitter feed last night, you sure as hell didn’t similarly lob bombs at anyone who spoke in Cleveland last week, and it is unconscionable for you to casually accuse Democrats of allowing Americans to die in Benghazi on Tuesday night and then inviting them on your licensed airwaves Wednesday morning. It’s the same blood libel as accusing Democrats of “banning” US flags at the DNC (a lie)…

After missing Monday night, Flags were on stage at the #DNCinPHL last night. https://t.co/XYG6PLGyML

…or that the flags weren’t properly displayed (they were), or that Democrats are unpatriotic or willing to essentially murder our diplomats or intelligence agents (a lie).

After a week in Ohio filled with fear and hatred, it is so refreshing to watch a convention filled with gratitude and hope. WBEN can heckle like a drunk at a comedy club, but it can’t change the truth.