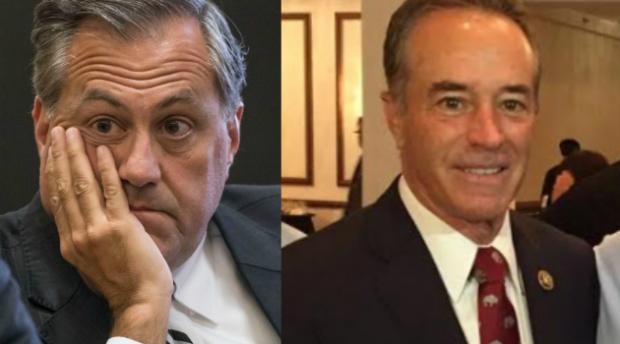 It wasn’t too long ago that Christopher Collins and Steve Pigeon were co-conspirators in a perfectly legal, albeit scummy, scheme to transform a Democratic majority in the Erie County Legislature into a shaky “reform coalition” controlled by Republicans to do Collins’s bidding. Who can forget how a small handful of nominal Democrats conspired with Pigeon throughout 2009 to hand the legislature over to Collins. Everyone got something out of the deal except for the people of Erie County, who were shafted, as was routine. In the end, as with many Pigeon-orchestrated hijinks, the effort crumbled into failure. Collins lost his re-election bid in 2011, but the damage that Pigeon, his money, and his cohorts could do to good Democratic candidates continues even today, despite 2013’s “WNY Progressive Caucus” (a.k.a. AwfulPAC) blowing up in their faces and resulting in Pigeon’s recent conviction for felony bribery, Frank Max’s conviction for election law violations, and the pending prosecutions of Kristy Mazurek and David Pfaff.

But memories are short and convenient, and the villains of January 2010 have largely not been drummed out of local politics. This is a testament, I supposed, to that whole “city of good neighbors” thing. You can back your enemy for short-term tactical political gain, and you will still be tolerated within Democratic ranks later on.

Steve Pigeon’s rogue political machine was a cancer on the Erie County Democratic Committee. Like any cancer, people tried valiantly to halt its spread, to attack and counter-attack, to do as little damage to healthy tissue as possible while killing the cancer. Getting rid of Pigeon as chair was just excising the tumor—the margins weren’t clear, and the battles continued. Unlike most cancers, however, we know exactly what fed and enabled Pigeonism: electoral fusion. Without the ability routinely to screw over Democratic HQ through malignant wheeling and dealing with the execrable “Independence Party” (which is neither independent nor, really, a party) or the so-called “Conservative” Party, Pigeonism couldn’t have existed.

As with most cancers, Pigeonism brought good days and bad days; but the prosecutions over 2013’s WNY Progressive Caucus seemed a miracle cure. The cancer got sloppy and an exciting trial of a new drug called ”Enforce Existing Rules and Laws” showed promise. The cancer is now in remission, but there is no known cure. Steve Pigeon may be a convicted felon, and he may be disbarred for it, but there is nothing stopping him from re-infecting our political organism. Even this primary cycle, aberrant cells of breakaway Dems mounted failed attempts to play the same old game, but it doesn’t work anymore; not like it used to. Not remotely.

Preetsmas carries on, and we must remain vigilant against the cancer returning.

Pigeon’s co-conspirator from 2010, Christopher Collins, also finds himself facing criminal charges. He stands accused of various types of fraud and is out and campaigning on $500,000 bail; evidently, he’s a moderate flight risk. After suspending his campaign and pledging to step aside, Collins—ever looking out for himself over the good of his constituents—flip-flopped and decided to stay in the race. So far, “campaigning” means throwing up racist, lying TV ads and showing up to events where he is guaranteed a friendly, placid audience. Christopher Collins can’t really debate anyone in any meaningful way. After all, he is under arrest and subject to a Miranda warning—everything he says can be used against him in a court of law.

But there is one constant that has helped to accelerate the growth of the cancer on our body politic represented by Pigeon and Collins, and it is beautifully embodied by this Buffalo News article. Written by dutiful longtime Pigeon stenographer Bob McCarthy, it seems simply to regurgitate a Collins campaign press release announcing a new television ad that will attack Democratic, un-arrested challenger Nate McMurray for supporting Medicare for all.

“Nate’s push for European-style health care shows how radically out of touch he is with the 27th District,” said campaign spokeswoman Natalie Baldassarre. “His plan raises spending by $32.6 trillion, doubles taxes for every American, and jeopardizes care for our seniors while severely raising their taxes. Voters should take Nate McMurray at his word – at least until he deletes this video.”

Let’s operate under a few assumptions, all of which give accused criminal Christopher Collins the undeserved benefit of the doubt. We start with the premise that the status quo, as it relates to American healthcare and insurance, is inadequate or unacceptable. Collins has spent years deriding Obamacare as a “socialist” failure, so he bears a substantial burden of proof to offer up an alternative. Not just any alternative—but specifically an improvement upon not just Obamacare’s status quo, but the pre-Obamacare years, as well. The goal is ostensibly to maximize how many are covered, the type of coverage, protection for pre-existing condition coverage, and lower cost. The pre-Obamacare system left too many people uninsured. President Obama cobbled together a Frankenstein compromise to maximize coverage within the context of the American private health insurance system, and expansion of Medicaid.

Here is a post from June detailing Collins’ relentless attacks on Obamacare and how he helped make everything even worse.

Although Obamacare was by no means a perfect solution, it has succeeded in expanding coverage, increasing the number of people insured, and guaranteeing a minimum standard of what “health insurance” should include. Despite all of this—despite it being a national roll-out of Romneycare, a single-payer alternative thought up by the ultra-conservative American Enterprise Institute think-tank—Republicans accused Obama of being a Kenyan socialist and Obamacare was an un-American socialist government takeover of healthcare.

So, let us assume for a moment that Republican attacks on President Obama and his signature health insurance scheme were somehow grounded in reality or even remotely sincere. Obamacare was passed into law in 2010. The Republicans had eight years to devise some sort of cheaper, better alternative. When they gained control of both houses of Congress and the White House, however, they couldn’t do it. All of their anti-Obamacare “repeal and replace” bluster was revealed to be little more than lies when they failed to actually do what they said they would do. For his part, Christopher Collins proudly went on TV and told his constituents that he hadn’t even bothered to read the bill for which he voted.

That video is, itself, disqualifying for re-election. Collins doesn’t care about you or your mommy or your daddy or your grandma or your farm or your business. He serves masters higher than his constituency—his political party and his relentless greed and ambition.

In recent years, the idea of expanding Medicare—the hugely popular single-payer health insurance plan for senior citizens—to all Americans has grown in popularity. It has become a viable and politically tenable alternative concept. As it stands now, Americans’ loudest and most sincere criticisms of private health insurance in the era of Obamacare is that it is too expensive, and deductibles are untenable and unaffordable. Medicare for all alleviates both concerns. So, Christopher Collins and his shills—experts at using ruthlessness as a cut-rate replacement for talent—deride Medicare as “radically out of touch” with people in the district. Go tell it to seniors. Go tell it to common ratepayers who devote thousands every year to cover healthcare costs and get little out of it. Tell it to people who can’t afford their medication. Tell it to people who fundraise for chemotherapy treatment through coin jars at convenience store check-outs. For the best and richest country in the world, we operate our healthcare like a tropical kleptocracy. Christopher Collins has no work ethic—he’s not trying to devise a reasonable alternative health insurance scheme. Christopher Collins has no ideas—he’s just a coward too afraid to even show up to debate his opponent on this or any other issue. Christopher Collins talks a big game when his high-priced DC swamp media gurus get a hold of him, but he trembles at the idea of a debate or being challenged.

Who cares what Christopher Collins says? I don’t get life tips from guys at Rikers, either.

Collins has no ideas, can’t be bothered to defend the few he purports to have in a public forum, and is just an empty vessel—an abject failure as a “representative” whose political survival is wholly dependent only on his party affiliation. When Bob McCarthy regurgitates a Collins press release, and then calls the McMurray campaign for comment, that is the laziest form of “journalism” available. Like Collins’s excuse for representation, it is a poor excuse for fact-finding. When Collins and his shills attack Nate McMurray for wanting to expand Medicare, why isn’t McCarthy asking them simple questions: What system do you prefer? What system do you propose? What changes would you make to McMurray’s plan? What changes would you make to ensure that health insurance and healthcare are comprehensive and affordable?

Sure, McMurray supports the expansion of Medicare to all Americans. No American should be faced with an illness and not have the means or opportunity to seek and obtain necessary medical treatment. McMurrayCare might indeed be a reduction in health insurance bureaucracy into one simple plan. (Ask doctors what they would prefer.) So, what is CollinsCare, except free access to a mason jar to use at cash registers to pay for your kid’s leukemia treatment?