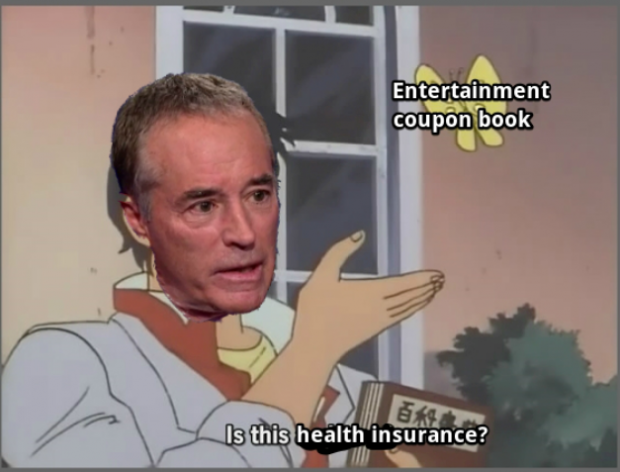 According to an article WGRZ published on Wednesday, some New York health insurers are asking for massive premium increases for 2019.

This isn’t the health insurance solution President Trump promised us, is it?

No one will lose coverage. There will be insurance for everybody. Healthcare will be a “lot less expensive” for everyone — the government, consumers, providers.

That was the promise of Donald Trump and his most obedient Congressional lapdog, Chris Collins (NY-27). Even before the Republicans’ failed efforts to “repeal and replace” Obamacare saw a vote, it was estimated that tens of millions of Americans would lose their coverage. These people had literally a decade to come up with an alternative plan that was better — in any way — than Obamacare, and when the time come they had nothing.

So, in December, Trump got his tax cut, and in it was a repeal of Obamacare’s individual mandate.

The goal of Obamacare was to expand access to affordable, quality health insurance. It forbade the sorts of scammy plans that took your money but offered no meaningful coverage. It wasn’t perfect, and it was flawed in its planning and implementation, but it was something.

And that something resulted in a lot of Americans getting health coverage who otherwise wouldn’t be able to — people working jobs with no benefits, people who were self-employed, people who earned too much to get on Medicaid and couldn’t afford astronomical individual plans. Obamacare was a national implementation of a conservative think-tank’s idea for universal health care — something Republican Governor Mitt Romney had introduced to Massachusetts in 2006. It wasn’t a federal takeover of health care, but a regulated system of private marketplaces offering insurance. The way to get closer to universal coverage was to obtain buy-in from the insurance industry. To do that, you needed the individual mandate because without it, only sick and older people would sign up while younger people would opt out. By opting out, you’d have too many payouts and too few premiums to cover it. The only other way to achieve universal coverage was to just have some sort of public plan — the “public option” on the exchanges, or Medicare for all Americans.

Republicans wanted no part of it. They agitated against it from the get-go, and held countless meaningless votes to repeal it. But when they controlled Washington, they had no alternative and everything they came up with guaranteed that people would lose coverage en masse.

So, let’s take a trip down memory lane and juxtapose that against the facts in WGRZ’s article.

“The state’s 14 private health insurers are requesting on average a 24 percent increase in rates next year, citing growing costs and a major looming change to federal health care.” — WGRZ June 4, 2018

“The insurers on Monday released their proposed rate increases for individuals and small group plans for 2019.

“They said they need the substantial increases in part because the individual mandate under the federal Affordable Care Act is being repealed.” - WGRZ June 4, 2018

“For individual plans, the largest increase being sought is 39 percent by Fidelis, which serves 1.7 million members.” - WGRZ June 4, 2018

Hochul doubles down on her support for Obamacare. After all, she voted to keep it in place 6 times. http://t.co/a6yE8J07 #ny27

We need more jobs in America, less spending in Washington and we need to repeal Obamacare. Join our campaign here http://t.co/fiBgRP1X #NY27

“The individual mandate was a key piece of Obamacare in 2010 because it required people — particularly healthy, young people — to buy insurance.

“The goal was to limit the risk pool and lower rates, but President Donald Trump and the Republican-controlled Congress said the measure was ineffective and repealed it last December.

“Still, Vullo said insurers cited the loss of the individual mandate as the main reason for large increases sought by insurers.

“Any increase approved by the state could affect the rates paid by people on private insurance, as well as the 4 million New Yorkers enrolled in its health exchange.

“The state put the rate increases squarely on the repeal of the individual mandate, saying without the change, insurers would be seeking increases of about half as much.” - WGRZ June 4, 2018

“Insurers cited other cost factors, too, such as the increase in prescription-drug prices.” - WGRZ June 4, 2018

I voted to #RepealAndReplace Obamacare to give WNYers more choices and lower costs. Read my full statement here: https://t.co/2Lk6EVmxef

“[Bill Hammond, director of health policy at the Empire Center, a fiscally conservative think tank in Albany], said it is the fifth year in a row that insurers have sought double-digit increases.

“Even after DFS knocks the requested rates down a little bit, the final increase is on track to be in the double digits for the third straight year,” Hammond said.” - WGRZ June 4, 2018

In response to all of this, Collins is silent while his opponent, Democrat Nate McMurray has renewed his invitation to debate Collins at any time, in any place.

Let’s see if this “Representative” will bother to debate his opponent on issues affecting his constituency.