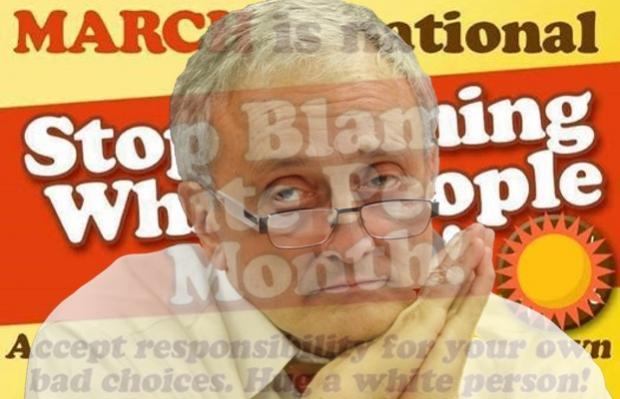 On Wednesday morning, prolific e-mail author and equine pornography enthusiast Carl Paladino revealed that his biggest fear is apparently riding a subway car on a Friday afternoon in which he is the only white person. This is a reasonable conclusion to extrapolate from his latest email missive, which is nothing more than a vituperative attack on anyone not white. It is typical racist Carl “I’m not a racist” Paladino garbage nonsense that he keeps sending out, yet people still take him seriously as some sort of business leader or voice worth listening to.

Paladino, the founder of Buffalo’s Ellicott Development, (which among other things rents apartments to people of various races, creeds, and ethnicities, and also operates a hospitality subsidiary that offers goods and services to diverse visitors to western New York), sent around a racist, Nazi piece of garbage email forward that is not only a poor translation from the Russian language, but is a completely false pack of lies.

It is entitled “19 Pictures from Hell.” Hell being Paris.

“France is Being Destroyed!” it blares, along with, “ANYONE DUMB ENOUGH TO BELIEVE THE PARIS RIOTS ARE ONLY ABOUT TAXES AND THE CLIMATE? TAKE A DEEP BREATH AND LEARN. “ The report is from:

“…neutral Czech Tourists in 2018 and still getting worse. The overwhelming abuse of the indigenous culture. Shame on those who welcomed such foreseeable destruction.”

When I did a reverse image search of these images, they all originated on Russian websites. Every one of them. It is an old Soviet trick to make the West seem extremely dirty and dangerous, and what better way to illustrate that then to stoke the racist fears of a largely homogeneous white society.

What is a “neutral Czech Tourist?” What does “abuse of the indigenous culture” mean? I think Carl means white people; that there are parts of Paris that are not predominately populated by white people. He must hate Buffalo and New York City and just about any other place where people of different colors, creeds, ethnicities, nationalities, and religions live and co-exist. There are two images next - one shows armed police outside Notre Dame, and another shows *gasp* black, brown, and Asian people milling about on a busy street.

These people are literally not doing anything other than existing. But this is a hazard of some sort to Carl and his “neutral Czech” correspondents.

The captions are, again, illustrative.

“We went there not so long ago, just go for the weekend. We bribed the price of tickets, unusually low, but we were not in Paris for more than 10 years…”We decided to refresh impressions, again inhale the French romance. The fact that the lowest price for Air France had alerted us, but nothing like this. “

We “bribed” the price of tickets?  None of this makes sense. Are they saying they bought cheap air tickets on a continent where one can routinely buy cheap air tickets, and that this is somehow evidence of the desireability of the destination?

“The flight was fine, then we boarded a train that took us to the center, and it was there that we experienced the first shock: not only was the Northern station all littered with debris, there was not a white Frenchman! It shocked us to the core.”

Waitwaitwait. You mean to tell me you flew to one of the biggest cities in Europe and the station had litter? And there “was not a white Frenchman?” I’ve been to Paris. It’s not the cleanest city in the world, but then Zurich doesn’t have a reputation for romance and intrigue. That “white Frenchman” thing though. That’s interesting. What difference does it make whether you saw a black or brown Frenchman? France was a colonial empire, but I guess some people are good enough to conquer, but not good enough to allow to immigrate? So far the “neutral Czech tourists” whom Carl stans saw litter and black people. This makes Paris “hell”.

Again. This is just racist garbage. But let’s continue.

Women in Niqab walking along the street throwing up a deuce? Two fingers? Peace sign? Oh, the humanity! People different from Carl minding their own business!

But let’s look at the next caption.

“Furthermore, we hastily settled near the Sacr Coeur, where the situation seems to have been even worse.”

Oh, no. Whatever happened to our intrepid “neutral Czech” tourists? a mugging? A robbery? An assault of some sort?

“When we went down into the subway to get to major attractions, then suddenly we found out that in the car my wife and I — only white. It was Friday, about two o’clock in the afternoon!”

Quelle horreur! They were the only white people in a subway car at 2 in the afternoon! This, my friends, may be Carl’s biggest fear. Being a minority, given his well-documented animus towards minorities.

There’s more. Here are pictures of trash and tents. Because brown and black people, right Carl?

The Louvre is deserted!  There are soldiers due to a state of emergency!  There are refugees! Muslims!

“On the streets of migrants crowd, full of shops, whose owners are refugees. Where did so many of them come from? At the Eiffel Tower — one. Check out all but covered from head to toe Muslim. This selectivity of the French. Landmarks around the tower teeming with hucksters of the African, Arab gambler, beggars from all over the world and pickpockets.”

Big city attracts poor people trying to hustle for a buck. News at 11.

There are more pictures. The top one has English signs. Paris? Doubtful. The middle one shows people dancing and playing drums. But they’re dark, so Carl is afraid of them. The bottom one shows migrants at Calais trying to LEAVE FRANCE to the UK. It’s not Paris.

Carl Paladino of Ellicott Development has more pictures for you, though. Black people. The black people are minding their own business. Or they’re poor. Or it’s a photograph taken from a news report about a street crime. They all look equally scary to him.

“It was a terrifying experience. I can imagine what’s going on in Marseille and Calais where migrants already de facto set their own rules. In France, a civil war is brewing, that’s what I say. Therefore, I recommend not to go there — Farewell, beloved France! God forbid that we had something like this in the Czech Republic!”

Yes. God forbid the Czech Republic finds itself a magnet for people from another continent. The Czech Republic was never, itself, an imperial colonial power. It did not attract or absorb its conquered colonists, whose overseas homelands had legally become as France as Paris itself. They still are, if you go to Martinique, Guadeloupe, Saint Martin, St Pierre et Miquelon, Reunion, or other French overseas dependencies and départements.

Look at that last image. That’s quite obviously a guy on the NYC subway taking a piss. I guess that answers the email’s last question, “Is America Next?” I guess a guy pissing on the downtown 6 is evidence that Paris is “hell”.

Let’s not pretend that Carl Paladino of Ellicott Development is anything better than what he regularly shows us he is. This email? This email is just straight-up Nazi “white genocide” “great replacement” propaganda. It’s beyond concerning that Nazi propaganda is being spread like this by the owner of Ellicott Development, a large local landlord to various residents, businesses, and government offices, and the owner of a company that provides hospitality goods and services to visitors to western New York.