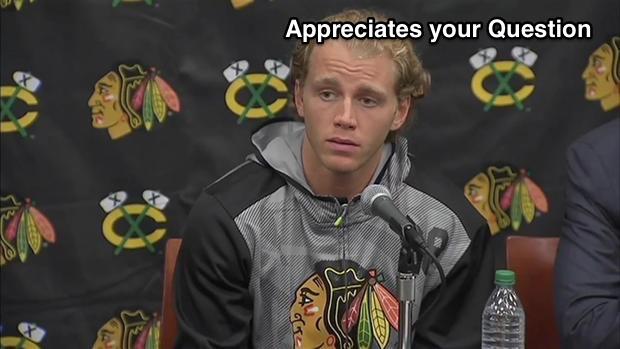 It’s been quiet lately on the Patrick Kane rape investigation front. Here’s what happened in August:

After the initial round of victim-shaming and leakage to the media, the meme over the past few weeks has been “will they or won’t they”? Specifically, will Kane and the victim reach some sort of private, civil accommodation (read: payment) in order to avoid a prosecution?

Although a civil settlement would likely involve some promise that the alleged victim would not testify against Kane or otherwise cooperate with any prosecution, it is not completely impossible for a D.A. to prosecute anyway; difficult, but not unheard-of. The upshot of it all is that District Attorney Sedita’s office mysteriously postponed the first day of grand jury testimony, and it’s scheduled to begin shortly. Reports of a possible settlement are contradictory and likely speculative.

In the meantime, Kane appeared at a bizarre press conference where he apologized for the “distraction” and otherwise generally appreciated — but did not answer — everyone’s questions.

In Sunday’s Buffalo News, however, we have more leaks from people who are likely aligned with Patrick Kane’s legal team, or else are superfans working for law enforcement. The News reports:

DNA evidence does not confirm a woman’s allegations that Patrick Kane raped her, four sources familiar with the case told The Buffalo News.

DNA tests taken from a rape kit conducted on the woman showed no trace of Kane’s DNA was found in the woman’s genital area or on her undergarments.

The lack of that DNA evidence does not necessarily mean a sexual assault did not occur, legal experts say, and the evidence involved in this type of investigation typically consists of more than just DNA. The investigation continues, and Kane has not been charged with any crime.

The only thing missing is a quote from a bar owner about how the alleged victim was asking for it.

Whoever these four sources are, they’re in the tank for Kane. Full stop. This is yet another piece of the elaborate and well-remunerated public relations war being waged against the alleged victim in an effort further to victimize her, shame her, and to try this case in the court of public opinion. Justice is not being served here — only the interests of a very wealthy and famous young man who finds himself in very deep trouble indeed.

But what about this, from a prosecutorial point of view? First, let’s ask a former sex crimes prosecutor who also happens to be a female:

“The absence of DNA and semen, in itself, does not prove that there was no rape,” said Florina Altshiler, a Buffalo attorney who worked as a sex-crimes prosecutor in Alaska. “It proves that there was no ejaculation, or possibly, that the perpetrator wore a condom.”

Altshiler said she is aware of cases in which rapists did wear condoms.

For the counterpoint, let’s ask a male, retired District Attorney:

If none of Kane’s DNA was found on the woman’s genital area or in her undergarments, that information “could be a game-changer” in Kane’s favor, he told The News.

“If the vaginal swabs taken at the hospital show no sign of his DNA, that could very well exonerate him of rape,” Clark said.

The occasion of a rapist using a condom is “extremely rare” in his experience. Clark said.

So there you go. Here’s a bombshell piece of leaked information of unknown provenance! What does it mean? MAYBE NOTHING, MAYBE ALL THE THINGS. Feel more informed?

Still, Kane’s DNA was found beneath the woman’s fingernails and on her shoulders, according to two of the sources, one of them a member of law enforcement.

Whatever occurred between the two prompted the woman to abruptly leave Kane’s home, call her brother on a cellphone, go to a local hospital to be examined for signs of rape, and to file a crime report with Hamburg Police, claiming that Kane attacked her, according to authorities and sources close to the case.

I don’t think its a credit — legally speaking — to the News’ four ejacualatory sources that Kane’s DNA isn’t where one might expect it to be, but rape means any unwanted penetration — however slight, so it’s likely that the alleged victim said no, Kane went for it anyway, and she managed to fight her way out of there before Kane finished. After all, Kane’s DNA was found on her, just not around her genitals or in her underwear.

Thanks to the News’ sources, we can now have this discussion: there doesn’t have to be semen for there to have been a rape.

Again: I don’t know whether or not Patrick Kane raped anybody; I certainly hope no one raped anyone. In mid-August, I implored people close to the case to stop talking to the media. As I wrote then, “…the jury pool poisoning is continuing apace — of course, no one has yet been charged with a crime, but it’s safe to say that the authorities are investigating whether one happened, and whom they might charge. So, what we see happening as the coverage lurches from Mark Croce’s victim-shaming to anonymous supporters of the alleged victim defending her, to Lieutenant Thomas English, the aforementioned designated driver turning to the News to rebut the alleged victim’s friends’ assertions.

“The whole case has devolved into a public relations battle. In this case, Kane has deeper pockets, star power, and more to lose, so it stands to reason that his PR effort would be well-funded and professional, while the alleged victim’s side has been silent, and some friends talked to the News without attribution.”

The PR effort calmed down a bit, but Sunday’s article reveals that the court of public opinion is in session, and that maens Kane’s alleged victim is now on trial. Cui bono? Obviously, Kane — casting doubt on the very existence of any “rape” certainly helps his image and bolsters those die-hard fans who refused to believe the allegations because of the identity of the accused. What if the leakers are from the DA’s office? This sort of revelation would, let’s say, soften the blow if charges aren’t filed — regardless of the whether there’s been a civil deal.