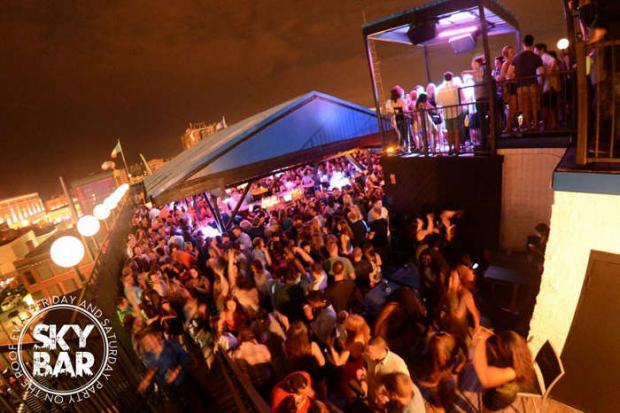 We can Buffalove ourselves to death, but someday this region will undergo a social and cultural enlightenment that’s been far too long in coming. Don’t let the shiny new buildings and downtown playgrounds kid you—we’re still downright medieval in other areas.

Whether it’s over 40s in Lanacaster desperately refusing to let go of base racism, or our continued tolerance of political leaders who express hatred and prejudice with impunity, western New York has a long way to go before it truly becomes the city of “good neighbors” it claims to be.

Although you knew that, too many of our “neighbors” don’t.

Let’s turn now to this story about the allegations that hockey star and very wealthy local Patrick Kane raped a woman. Kane is entitled to a presumption of innocence in court. His accuser, however, is entitled to basic respect. Trials are what we use to find the truth — they’re not perfect, but they’re the best we have. The Buffalo News reports that Kane’s accuser had visible signs of injury and that she called the authorities and went to the hospital almost immediately after the incident at Kane’s home.

It makes sense at this early stage, given the very little we know, to not rush to judgment about Mr. Kane — neither about his guilt or innocence.

But when a woman says she’s been the victim of sexual assault or rape, we can’t dismiss that. We should take it seriously, and I don’t think we are. WBEN spent the better part of one afternoon this week basically accusing the accusing victim of being a liar and a gold-digging bitch. The Buffalo News Sunday does the same exact thing. The first part of this article glosses over the limited facts about the alleged rape, but a full 80% of that article — give or take — is devoted to SkyBar owner Mark Croce going out of his way to portray Kane’s accuser as a lying, gold-digging whore of a bitch.

The Buffalo News is irresponsible for printing what Croce describes because he has no clue whatsoever that what he supposedly saw (let’s not rush to judgment on its truth or falsity, either) bears any relation — direct or indirect — to the underlying allegation that very wealthy privileged hockey star Patrick Kane raped and assaulted some nobody girl no one knows.

Know this: the Rape Abuse & Incest National Network says that 98% of rapists never spend a day in jail and 68% of women never report their rape or sexual assault.

It’s not hard to guess why.

But Croce told The News that he and several of his employees noticed a young woman “hanging all over” Kane at SkyBar for at least two hours that night, putting her hands on his arms and “being very forward, very flirtatious with him.” He said he does not know the woman and does not know her name.

“It was almost like she stationed herself near him and was keeping other women away from him,” Croce said. “I noticed it and kind of laughed about it.”

Croce said the woman and a female friend “followed” Kane as he left the nightclub with a couple of male friends around 3 a.m. last Sunday.

“I don’t know if this is the same woman who made the rape allegation against him,” Croce said. “I only know what I saw that night on my own premises. If you’re going to ask what happened between them after they left that night, how would I know?”

That’s a tremendous volume of words and space to basically regurgitate what amounts to little more than rank speculation. But it doesn’t end there.

Croce said he has been inundated with media requests for interviews. He said he decided to speak to The News on Saturday night because he is upset with media reports that “insinuate” that Kane was out of control during his time at SkyBar.

“I’ve got no skin in this game. I am only telling you what I observed,” Croce said. “(Kane) was acting like a typical young guy his age, out having fun with some of his buddies. A lot of people were coming up to him, asking to have pictures taken with him. He was a gentleman. Pat had a couple of drinks and maybe a couple of shots. He was having a good time, but he wasn’t stumbling or doing anything obnoxious.”

Croce said that, in his opinion, some news media reports make it appear as though Kane is guilty of rape.

“This is America, the place where you are still innocent until proven guilty,” Croce said.

He said that, to his knowledge, Kane has visited SkyBar “two or three times” in the past several years and never caused problems there.

To hear Croce tell it, he’s vomiting up his speculation to the News — which is dutifully transcribing it — to ensure that everyone knows that Kane wasn’t drunk.  Why would that matter?

It matters because he doesn’t want the authorities or the victim to come after SkyBar for any liquor law violations or “dram shop” liability. Specifically, under New York law, if a bar serves an obviously intoxicated person who goes on to injure some third party, that injured third party may sue the bar for money damages. Croce is covering his own ass here, and the News didn’t even comment on his motive to provide these speculative details to its reporters. I mean, let’s just start the portrayal of Kane’s accuser as a whore-who-had-it-coming so that she thinks twice about suing SkyBar.

The thinking here is as misogynist as the host on WBEN who also jumped to the conclusion that Kane’s accuser is a lying gold-digger. He’s very concerned that Kane is being portrayed as “guilty of rape” (I haven’t seen that, so who knows what he’s talking about), so Croce figures he’ll denigrate Kane’s accuser by telling the Buffalo News all about the girls hanging all over Kane at the bar.

Not only do we not know if this was the same girl accusing Kane of rape, but being a flirt at a bar doesn’t give anyone the right to commit a rape later on.

Also, Croce is being duplicitous when he says he has “no skin in the game”.

Croce said that plans had been made for Kane to visit SkyBar on Saturday night with the Stanley Cup, the coveted National Hockey League trophy that Kane and his Chicago Blackhawks teammates won June 15.

But, apparently because of the controversy over the rape allegations, that visit was canceled, Croce said at about 8 p.m. Saturday.

Having Patrick Kane bring the Stanley Cup to your bar, and then canceling due to a rape allegation, is Croce’s “skin in the game”.

I agree that people shouldn’t rush to judgment and conclude that Kane is a rapist, although that presumption of innocence is a matter for judge and jury — not for anyone else. By the same token, it would be just swell if people could avoid concluding that Kane’s accuser is a gold-digger or a whore or whatever. Let the matter play out. Let the facts come out. Consider how you would react and feel if it was your daughter or wife or mother who accused someone — perhaps someone rich and prominent — of sexual assault or rape, and bigshot businessmen were running to the papers to insinuate that they had it coming. Consider then the responsibility of the news media to report on that businessman’s motive to speak in that way.

By the way — Paul Cambria is Kane’s defense lawyer, but consider this from an earlier News piece,

In an odd coincidence, the wife of Kane’s lawyer, defense attorney Paul Cambria, posted a photo of herself, her husband and another couple at what appears to be SkyBar.

Cambria and his wife could very well be called to testify as witnesses as to what they observed at Skybar that night, as far as Pat Kane is concerned. Query whether — or how — that affects his ability to be Kane’s lawyer here. I direct your attention to Rule 3.7 of the Rules of Professional Conduct for lawyers.

We don’t know what happened, and neither does Mark Croce. Mark Croce should STFU and the News was irresponsible for uncritically reporting what he says he saw.

Editor’s note: Commenting has been disabled on this article after a commenter left information that purported to identify the alleged victim in this case.