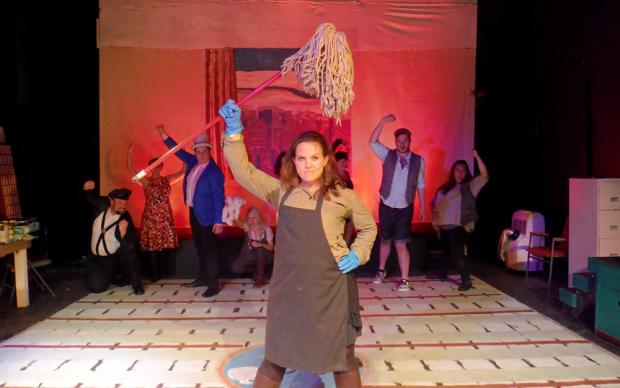 Urinetown by the Subversive Theatre Collective at Manny Fried Playhouse.
by
The Public Staff
/ Sep. 14, 2016 12am EST

Curtain Up! has arrived: This Friday, September 16, the regional theater season opens with a celebration in three acts:

Act I:  You eat and drink at a restaurant in Buffalo’s Theatre District. (See our map on page 23 for a handful of suggestions.) Or you can spring for the black-tie gala dinner on the main stage of Shea’s Performing Arts Center.

Act II:  You see a play. (Curtains rise at 8pm.) If you can still get tickets to one, that is. If you can’t, never fear: Most of the Curtain Up! shows continue beyond this weekend. You might choose instead to continue carousing, until…

Act III:  A full-on street festival on Main Street in the Theatre District: live music, dancing, street performers, and other shenanigans. It’s free, and continues until 1am (officially) and much longer than that (unofficially).

A world premiere by Louisiana playwright Larry Gray: “An ex-sportswriter turned agoraphobic advice columnist must face and conquer his own fears to save someone he loves.” Gray’s work should be familiar to Buffalo audiences: This is the ninth of his plays that Neil Radice and Alleyway have staged.

A rock opera with songs by Billy Joe Amstrong of the pop-punk band Green Day and a book by Armstrong and Michael Mayer, who directed the Broadway production, which was nominated for the Tony for best musical and won a Grammy for its Broadway cast album.

UP NEXT: How to Make Friends Then Kill Them by Halley Feiffer, October 27-November 19. Sharp, dark, and witty.

Pulitzer-winning playwright David Lindsay-Abaire’s comic tale of a woman who leaves her husband, runs off to Niagara Falls, and falls in with a crew of quirky characters.

World premiere of a piece written by the Brazen-Faced Varlets, part of a series dealing with women in prison.

UP NEXT: Midsummer Dyke Dream by Shawn P. Northrip, a co-production with BUA, marks 10 years of the Varlets queering Shakespeare. November 18-December 10 at Alleyway Theatre.

For BUA, it’s another play about theater people, following this summer’s production of Terrence McNally’s It’s Only a Play. The New York Times calls this one, by Jeff Talbot and co-presented with Ujima, a “perky tale of racial pride and prejudice in the theater.”

UP NEXT: For BUA, Christmas in July, a comedy by Matthew Crehan Higgins. October 14-November 6.

In which aging gigolo Chance Wayne demonstrates that you can, but probably shouldn’t, go home again. By Tennessee Williams.

UP NEXT: Two well-known works in a row by Peter Shaffer, Equus and Amadeus, which Shaffer brought out one after another—in 1973 and 1979, respectively.

The adventures of a young playwright, beloved of Buffalo dinner theater set, getting his first play produced on Broadway.

UP NEXT: The 39 Steps, a comedic melodrama adapted by Patrick Barlow from the Hitchcock spy thriller, itself adapted from the short novel by John Buchan.

UP NEXT: Jekyll & Hyde, the musical version of Robert Louis Stevenson’s story.

And more Sondheim! MusicalFare promises a reinvention of the classic, under the direction of Chris Kelly, who has a gift for that.

UP NEXT: Tenderly: The Rosemary Clooney Musical, which has a songbook sure to please fans of the great American popular singer and pop culture personality. Opens November 2.

Terrance McNally is having a bit of a moment in Buffalo right now, thanks in part to BUA. The New Phoenix joins the action with this 1991 play about two straight couples spending a July 4 weekend on Fire Island.

UP NEXT: Give’em Hell, Harry, a one-man show written by Samuel Gallu and starring Peter Palmisano as Harry S. Truman.

UP NEXT: Breast in Show, a musical about five characters, each of whom has been diagnosed with breast cancer. Opens September 28.

The great August Wilson’s eighth entry in his 10-play Pittsburgh Cycle, this one set in a gypsy cab.

UP NEXT: Christmas Is Comin’ Uptown, a reimagining of A Christmas Carol, opening December 8.

By Robert Waterhouse: “Voodoo and vengeance descend on a small Louisiana town when a mysterious preacher bewitches the local women and confronts a county sheriff about his past.” Based on the tragedy by Euripides.

UP NEXT: The Unfortunates: It’s 1888 in the Whitechapel neighborhood of London, and Mary Jane Kelly is broke and alone. Coming in October.

Donald Margulies’s play about the two couples, old friends, who are made to confront the reality of their relationships when one couple announces they are getting divorced.

It’s really about time that Subversive pulled together a production of the ultimately subverting Broadway hit. Through October 15.

UP NEXT: One Flew Over the Cuckoo’s Nest, adapted from Ken Kesey’s novel by Dale Wasserman. Starring Thomas LaChiusa as McMurphy. Opens November 3.