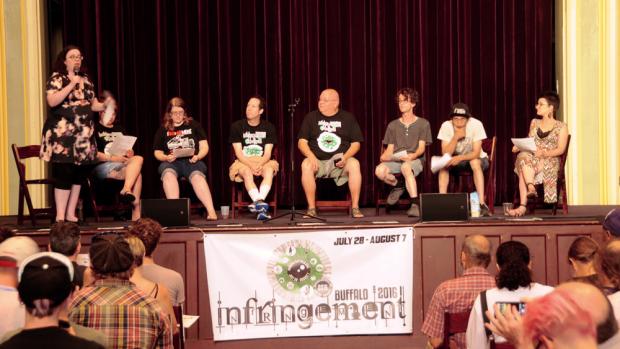 David Adamczyk sits crumpled in a chair at Curt Rotterdam’s house. A mop of moving curly brown hair momentarily betrays an otherwise motionless body. Adamczyk has just returned from a three-day festival at Buffalo State, where he and his partner, Heather Gring, were asked to program some of their Infringement Festival artists. Not content to merely program, the accomplished violinist also performed, while promoting the 2016 Infringement Festival, happening July 28-August 7.

Adamcyzk has been a both a performer and the “street” organizer for Buffalo’s Infringement Festival for many years. Even in his sleep-deprived state, he and long-time music programmer Rotterdam have agreed to lift the curtain and offer a glimpse at the behind-the-scenes work it takes to mount Infringement each year.

Ron Ehmke, one of the 12-year-old festival’s first organizers, remembers: “A dozen or so years ago Kurt Schneiderman invited me, along with a handful of like-minded theater artists, puppeteers, dancers, and performers of various kinds, to join him at Towne Restaurant to talk over an idea he’d gotten when he toured a Subversive Theater show in Canada.”

Schneiderman saw the potential for an Infringement in Buffalo and the festival made its debut in 2005. Today, Buffalo boasts the largest Infringement Festival in the world.

The cast of characters

The mission statement of the Infringement Festival starts with its name. The first “Infringement” festival came about as a reaction against the commercialism of Montreal’s Fringe Festival. Then egalitarian spirit of Buffalo’s festival, and the refusal to play by the rules of capitalism, has remained steadfast. Currently in its twelfth year, both the festival and its number of organizers have grown considerably. Schneiderman has long since relinquished his role, and many long-time performers—including Adamczyk, spoken-word artist MC Vendetta, and dancer Leslie Fineberg—have taken on organizing jobs. Given Infringement Festival’s unpolished reputation, one might assume its organizers mirror some of its acts: holding the event together with duct tape and Krazy Glue. Nothing could be further from the truth. While the festival may have an appetite for amateurism, behind the scenes it is all punk-rock professionalism. With 12 organizers spread out over the varying disciplines and venues, monthly meetings for next year’s festival will begin immediately following this year’s concluding ceremonies. Fundraising will start in the winter and the real heavy lifting begins in March, when submissions open.

The makeup of the group of organizers is always shifting. Gring, currently in her second year as an organizer, says, “You are always building trust with different people. You have core people that have been there for years, and then perhaps one person who is new, and that throws off the rhythm—and that is a continual learning process.” Currently the longest-running organizer is Rotterdam, who was pulled in by Schneiderman in the festival’s second year. Known mostly as the group’s whip-cracker, he can occasionally turn group meetings contentious. “There have certainly been stories of me flipping out,” he says. “What people don’t understand is it is because I care. Maybe I care too much.”

The sheer numbers of acts that Rotterdam and Adamczyk have to program adds to the mounting stress. While dance, theater, and spoken-word may each have about 40 acts this year, and visual art about 70, music and street performances total upward of 300.

The infamous meetings are akin to large family dinners, complete with clashing personalities. During one meeting, new theater organizer Jessica Knoerl painstakingly asks questions about the collective scheduling system. Concurrently, Rotterdam harangues Adamcyzk for his big-picture approach to booking, drawing eye-rolls from another organizer. Visual coordinator Amy Duengfelder patiently helps Knoerl with the sprawling scheduling. Throughout the two-hour meeting, Gring keeps the motley crew on a productive track. She defines her role as “organizing the organizers”; others say her real strength lies in communication. “I’ve been put in situations where I have had to have some hard conversations to help some understand how they are affecting others,” she says. She attributes her ability to calm the waters to living in a housing co-op.

When asked about how different personalities have historically worked in these meetings, MC Vendetta explains, “Everybody has to have a role. One person maybe seen as too hostile or another too passive, but you need both to make it work.”

Spoken-word organizer Marek Parker characterizes Infringement meetings as “volatile, supportive and screaming. But they always end in a group hug.”

In the spring, most organizers spend between five and 10 hours per week on the festival; a month out, the time commitment approaches 20 hours. The increase has to do both with the growing numbers of performers and the event’s heightened visibility. Famously, in 2014, Mayor Byron Brown walked by an outdoor Infringement performance and asked, “What is this?” This sparked the first concerns about city permits. While the red tape of city bureaucracy initially loomed large, the visibility of street performances has both raised the consciousness of the event in the eyes of the city and expanded the festival physically. Says Ehmke, “We used to push the slogan that the festival was about ‘art under the radar,’ but nowadays the festival is a radar for what’s going on all over the city.”

This year, in addition to Allentown, there are venues around Grant Street, downtown, and on the East Side. In particular, the Gypsy Parlor, Main Street Gallery, Dreamland, Hi-Temp Fabrications, and Locust Street Art are all onboard. Says Fineberg, “Infringement has made art more accessible, which has made us more visible. Yet, the more successful and visible we become, the more we feel we need to provide to people.”

Some organizers feel that the festival has reached a critical mass. In many ways, the sprawling tentacles of Infringement mirror the expanding development of the city itself. Says Parker, “While Allentown is an amazing area, there is a larger arts community throughout the city. We are trying to incorporate different areas and different cultures that reflect the diversity within Buffalo.”

Gring thinks Infringement Festival would not have survived 12 years if it weren’t for Rotterdam. “I think that the reason the festival is alive because of his passion and his determination. I also think that he has also run through his entire network of friends in terms of getting them involved.” When asked why he approached Adamczyk to organize street performers, Rotterdam deadpans, “I asked a lot of people; he was just stupid enough to say yes,” before breaking into his trademark laugh. Rotterdam is also the first to find the underlying humor in the organizing group’s often tense conflicts. This combination of traits has sustained him through his 11 years with Infringement. “People have done Infringement in the past and just left. I don’t know why I have decided to stay with this as long as I have. Maybe it is partly because I’m nuts; mostly because it is in me to do things for the cause.”

All the organizers emphasize the cause, Infringement’s core mission. All describe the magic of the unexpected. Whether it’s forging friendships, forming bands, or experiencing art you never thought you’d see, Infringement seems less an abstract concept and more about creating a tangible DIY gift economy. And if there’s a super-power these organizers share, it is the ability to see potential. “What we create through these 11 days is these exuberant moments of creativity and support,” Gring says. “It is a love letter to Buffalo”.

Rotterdam is equally idealistic, if more pragmatic: “It was at WBNY where I learned doing something not for the sake of getting paid for it, but because you love it. And it is a charitable event; it is a great thing. It’s beneficial for the community. There have been people who have asked me if I want to get paid for Infringement—and there was a time when I even thought about it—but then I think that I might rest on my laurels. We should just have more people helping, period. That’s really what it boils down to.”

Adamcyzk concurs: “It was a situation that couldn’t exist without the framework that is Infringement. One of the first things I asked Curt was, ‘Before I get involved, you’ve got to tell me right now, are there any strings? Are there things going on behind the scene making this thing work?’ He looked at me squarely and said, ‘There are no strings in Infringement.’”

Even after a two-hour Infringement press preview at Asbury Hall, Duengfelder, Fineberg, and Vendetta all happily agree to let me interview them over frozen yogurt. Forty minutes and many mosquitoes later, Duengfelder offers to drive me home. As we discuss the original Interpol and Twenty-One Pilots’ newest single, I start to feel as if I’ve known this person for years. The comfort of the car ride evokes the larger ethos of Infringement: artistic care and kinship, with no strings attached. These tireless organizers will continue to clock in at their day jobs and spend their remaining hours on the phone, sending emails, using whatever means necessary to ensure the event runs smoothly. So if you see a few sporting a sleep-deprived look, offer a smile or a word of thanks. They certainly don’t put in the hours for the pat on the head, but even writers of love letters to the city need a group hug now and again.