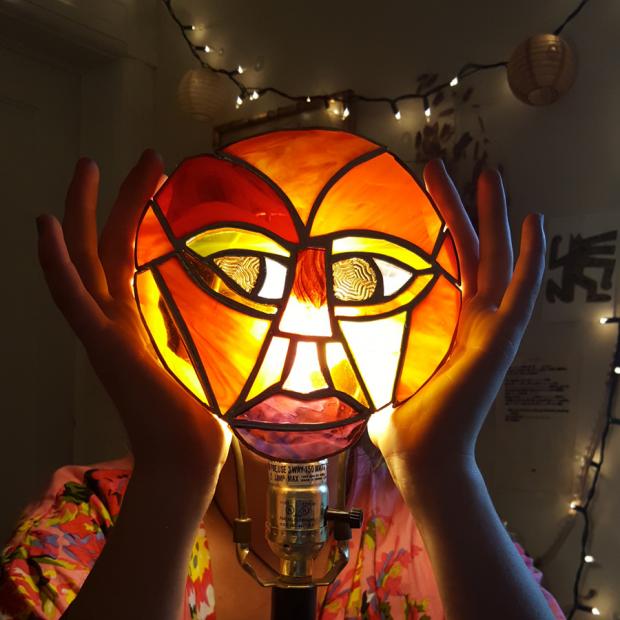 Buffalo’s greatest Louisianian stained glass artist, Chelsea Black, has been working tirelessly in preparation for the Infringement Festival. Although her opening this week marks the first public showcase of her work to date, Chelsea is no Southern fledgling; she first began experimenting with the medium of glass way back in the days of her youth.

“My mom is an artist who worked in several different mediums while I was growing up; pretty much any form you can think of. We had a studio in our house that she used for stained glass but it wasn’t until high school that I tried my hand at it and learned some of the techniques,” she says. “When I went away for college I no longer had access to the materials so I pursued other things.”

Chelsea’s hiatus from working with stained glass came to an end when she moved to Buffalo last year and drifted serendipitously into the strange and alluring laboratory known as the 6th Dimension Studio. It was there that veteran stained glass artist, visionary mathematician, and polydimensional theorist Jim Sawyer took Chelsea under the truncated wing of his vast geometric understanding and helped rekindle a spark of childhood bewonderment in her.

“The very first day that I walked into the 6th Dimension [studio] Jim was working on putting together a massive 10-foot-tall globe. He noticed the tattoo of the world on my arm and immediately took it as a sign. He was jumping in glee and crying ‘you’re an angel!’”

Early this year, after logging hundreds of hours at the 6th Dimension, Chelsea decided to set-up a studio in her home in order to pursue her own personal visions for stained glass. Her most recent project is an adaptation of a West African fable which uses allegory to encourage mindfulness and a healthy skepticism of one’s own impulsive conclusions regarding others.

“The story is called Why Mosquitoes Buzz in People’s Ears. I picked up a version of it at a thrift store that had amazing illustrations done almost in the style of stained glass,” she says. “I was immediately inspired to try and bring the characters to life and share the message of the book, which basically points out that the assumptions we make aren’t always correct. We might see something with our own eyes and assume that we understand what’s happening, but that’s not always the case. It reminds us that when we observe others’ behaviors that we don’t fully understand, instead of reacting brashly we should seek a deeper understanding through trying to connect more fully with one another.”

Why Mosquitoes Buzz in People’s Ears will be on display at Main Street Gallery, 515 Main St., this Friday, July 29 for the entirety of the Infringement Festival.