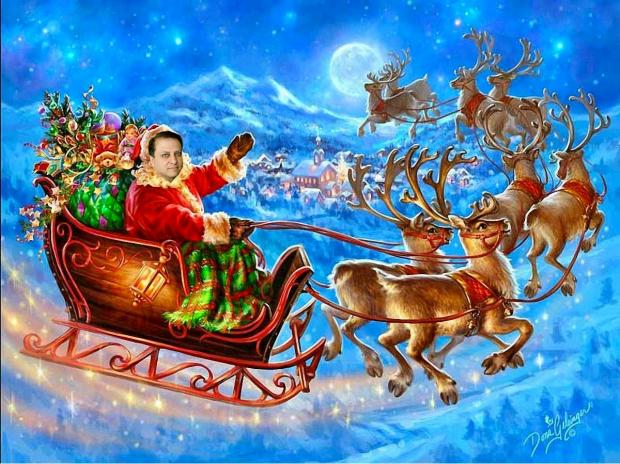 In case you missed them, here are the Preetsmas posts so far:

It’s more likely than not that the investigation into the Western New York Progressive Caucus — or “AwfulPAC” has spread into other areas, and the feds are following their own investigation and not just helping out state and local investigators.

New York’s election law is an overcomplicated morass designed to guarantee full employment for anyone with the herculean patience to figure it out. For instance, the maximum allowable campaign contribution in the 2013 Democratic primary election must be calculated based on the number of Democrats enrolled in the district under NYS Election Law 14-114(1)(b).  When calculated, the Board of Election posts it to its website. For instance, the maximum anyone could contribute to the (AwfulPAC-backed) Rick Zydel and Wes Moore 2013 Democratic primary election campaigns was somewhere around $1,100 — 1,200, for a single contributor.

Back during the 2013 primary season, Cheektowaga’s Frank Max was closely aligned with AwfulPAC — in fact, it was commonly referred to at the time as his & Mazurek’s. The name of his longstanding operation is the “Progressive Democrats of WNY” (all [sic]). If you take a look at that group, it gave the following to Zydel’s campaign:

In the same document, three checks to the Wes Moore campaign from Max’s group are revealed:

Frank Max should know better than that. He was until recently town chair of the Cheektowaga Committee, hoped to be the county chair — can he claim that his personal political organization didn’t knowingly and willfully violate the law?  Assuming the authorities have flagged this, it could be a useful way to encourage him to provide information on the entire AwfulPAC scheme.

Max is the treasurer for the Progressive Dems. Kristy Mazurek is (or was — the address is likely out-of-date) the treasurer for “Friends of Frank Max”.  It’s believed that Max was deeply involved with the goings on of AwfulPAC in 2013, but we haven’t heard much from Frank since the heat was turned up on the investigation.

Note in its 2009 filings — the year after it attempted to bring democracy back to the NYS Legislature — on May 15, 2009, it received back as a repayment a “refunded expenditure” the sum of $120,000.  Such “expenditure” was supposedly made in August, 2008 by RNY.  And who “refunded” that $120,000 - why some entity known as “GSDP, LLC”.  A review of the Department of State website reveals that this LLC, which features Pigeon’s initials, has a registered address at Pigeon’s former law firm, Underberg & Kessler.

Good for GSDP to refund that huge sum of money to Responsible NY. There’s a problem, though — no such expenditure exists; Responsible NY never gave any money to GSDP. Maybe more interesting would be for the Tax Man to look at how GSDP “earned” that $120,000 (which is taxable) but then tried to write off a “refund” of an obligation that wasn’t GSDP’s. You can’t pay someone else’s debt and then deduct it as a business expense.

Oddly enough, the Board of Elections’ wonky website shows only two expenditures made to GSDP — from the Niagara County Republican Committee. It bears mentioning that the Cheektowaga address that GSDP lists in those disclosures matches that of “Citizens for Fiscal Integrity”, which gave money to Joel Giambra and Responsible New York. It also contributed to “People for Accountable Government”, whose treasurer appears to have been Pigeon associate David Pfaff. That group received $1000 from GSDP. In 2007, it reported $100 from Steve Pigeon and $2000 from Joel Giambra’s committee. In 2008, Pigeon supposedly contributed $20,000. That was the year of the Mesi campaign. CItizens for Fiscal Integrity was formed in 2005, and took in $13,500 from GSDP that year. It also took in $8000 from Roger Stone and his wife. It’s not clear from the disclosures whom that group was intended to help or harm.

What was this refund to Golisano’s committee all about? Golisano was drawing out a lot of the money by repaying his initial loan, so it could have been a refund not to GSDP but to Golisano himself, possibly in connection with the Joe Mesi race.

Pfaff is a longtime Pigeon associate, and is currently employed in the office of State Senator Marc Panepinto. In 2013, Pfaff was living off the “consulting fees” of $800/bi-weekly, being paid by Frank Max’s “Progressive” Democrats while he was working for the Dick Dobson for Sheriff campaign and AwfulPAC — all at one time. In his 2015 bankruptcy filing, Pfaff claims not to have earned enough money to file tax returns for 2013 and 2014. But he had the cash to contribute $25 to Dobson?

Sources report that Pfaff petitioned in 2013 for candidates supported by the AwfulPAC, and assisted Dobson in Board of Elections proceedings.

Moore was the beneficiary of thousands of dollars’ worth of expenditures by AwfulPAC against his primary opponent Wynnie Fisher, and on his behalf. It bears repeating that the smear campaign that Moore helped engineer with Kristy Mazurek against Fisher on the eve of the November election was thanks to information sent to Moore c/o Mazurek’s address, despite the fact that his Treasurer was shown at the BOE as being first in Buffalo and later in Clarence. The stench of illegal coordination is overpowering.

It, therefore, bears mentioning that Moore is reported to have contributed $300 on August 21, 2013 to the AwfulPAC making supposedly “independent” expenditures on his behalf. That is bizarre; practically unprecedented for a candidate who is the beneficiary of an independent expenditure to actually contribute to that very committee.  Was there a fundraiser for AwfulPAC that he attended? Did he speak with anyone there?

It appears as if AwfulPAC has amended its filings to eliminate what had originally been reported as a $25,000 fee to Landen, LLC — you can see it referenced in former Assistant District Attorney Mark Sacha’s complaint to the Moreland Commission. It appears here as an outstanding loan, but the original “loan” itself is nowhere to be found. Note that Landen, LLC is now listed at the same 101 Reo Ave address as GDSP and “Citizens for Fiscal Integrity”, as shown above.

Pigeon also used that Reo Ave address for many of his own contributions. For instance,

If you look at this article I wrote at the time, I reported that Landen had given Dick Dobson $200, but now the link shows an additional $400. I don’t know that financial disclosures were allowed to be so … fluid. Likewise, in Dobson’s first post-primary report, “Democratic Action” donated $9,000. That’s fine – that’s what a PAC is legally empowered to do. Except Democratic Action hadn’t filed a single disclosure during that cycle, its last being a “no activity” report in July 2013. Its last reported fund balance? $2,400. If you’re going to BS people, at least do so credibly.

Aaron Pierce filed a lawsuit in state Supreme Court against three trucking companies that supposedly lost or converted $785,000 of untaxed cigarettes that Pierce was trying to transport from WNY to another Native American on Long Island. Pierce accused the trucking companies of stealing the cigarettes, and Justice Marshall dismissed the complaint because you can’t enforce an illegal contract.

It looks like Mr. Pierce and AJ’s Wholesale, LLC is out $785,000, and if the state Department of Taxation requires that state taxes be paid and stamps affixed to the cigarettes when they were placed on trucks for shipment through New York State to a different Nation, then he may also owe state taxes. Remember that one of Pierce’s companies was already in big trouble, with a big civil forfeiture for what amounts to a conviction for bootlegging cigarettes.  Did he really wire that $20,000 to Buying Time, as the AwfulPAC claims?

Here’s a handy chart of all the money that went into and came out of the WNYPC “AwfulPAC”. There is the aforementioned “loan” of $25,000 from Landen, LLC which is completely unaccounted-for. Also not the discrepancies in terms of the dates of money coming into AwfulPAC from Frank Max and Tim Kennedy. How was AwfulPAC able to account for $4000 in donations from the Progressive Democrats that didn’t come in until days — or weeks — later? Friends of Frank Max supposedly gave $1750 on 9/3/13, but it only had $100 on hand in the most recent previous filing, and there appears to be no entry for that sort of outflow.

As for Tim Kennedy, he contributed $85,000 to AwfulPAC and $10,000 to Democratic Action — which promptly turned around and donated it back to the favored candidates of the AwfulPAC — Dobson, Miller-Williams.  So Kennedy gave a total of $95,000 to the two committees, which he had to know were backing candidates in the September 2013 Democratic primary election. Under Election Law 14-102 (1), Kennedy for Senate (as did Democratic Action) ”participated” in the primary election and had a duty to file pre-primary and post-primary campaign finance reports with the New York State Board of Elections.  However, neither did.

Under no circumstances is it legal or proper for a campaign or committee to participate in a primary election,  but make people wait until the following January to find out what they did. This may be a crime pursuant to Election law 14-126 (3).

As to Democratic Action, all of a sudden in mid-2013, it received $10,000 from Kennedy and another $2,000 from Nancy Krzyzanowski, an employee of Collucci & Gallagher. That seems like an odd donation from to an obscure and largely inactive PAC. Then again, she’s also given $500 to Chris Collins, $1000 over time to the Tonawanda Democratic Committee, and — oddly enough — $3000 to the New York State Republican Committee in 2004.

More to come as the Preetsmas gifts get hung on the chimney with care.