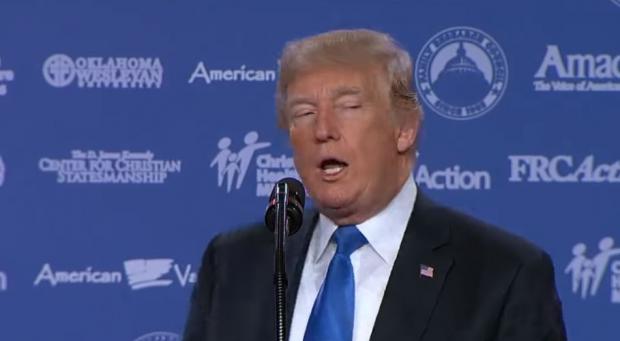 Here is a portion of a speech that Donald Trump gave to the so-called “Value Voters Summit” in October 2019:

We meet tonight at a crucial moment in our nation’s history.  Our shared values are under assault like never before.  Extreme left-wing radicals, both inside and outside government, are determined to shred our Constitution and eradicate the beliefs we all cherish.  Far-left socialists are trying to tear down the traditions and customs that made America the greatest nation on Earth.  They reject the principles of our Founding Fathers — principles enshrined into the Declaration of Independence, which proclaims that our rights come from our creator.

A Yale philosophy Professor juxtaposes that Trump speech with this, from 1935:

Bolshevism is explicitly determined on bringing about a revolution among all the nations. In its own essence it has an aggressive and international tendency. But National Socialism confines itself to Germany and is not a product for export, either in its abstract or practical characteristics. Bolshevism denies religion as a principle, fundamentally and entirely. It recognises religion only as an “opium for the people.” For the help and support of religious belief, however, National Socialism absolutely places in the foreground of its programme a belief in God and that transcendental idealism which has been destined by Nature to bring to expression the racial soul of a nation. National Socialism would give the lead in a new concept and shaping of European civilisation. But the Bolshevics carry on a campaign, directed by the Jews, with the international underworld, against culture as such. Bolshevism is not merely anti-bourgeois; it is against human civilisation itself.

Contemporary Republicans embrace totalitarian, evangelical-flavored neo-fascism and falsely denounce Democrats as anti-American. This is blatant gaslighting, and every Democrat and Democratic candidate should be shouting about it as loudly as possible. Literally everything else — from medical coverage on down — matters little until this neo-fascist scourge is defeated; defeated it has always been, and defeated it shall always be. Not through arms, but at the ballot box.

This is why it’s OK, for instance, on WBEN’s air to threaten the life of a Democratic elected official with impunity. (Three weeks and WBEN remains silent). It is nihilist eliminationist right-wing nationalist neo-fascism. Tim Wenger and his crew are among its vanguard. This isn’t new. I made fun of this in 2014, when I still wrote for Artvoice, and Tim Wenger thought it funny that someone would threaten Hillary Clinton with violence.

Protecting liberty, democracy, and the rule of law are fundamental American values. The Democratic Party is all about protecting them. Whatever the Republican Party is now, is not.