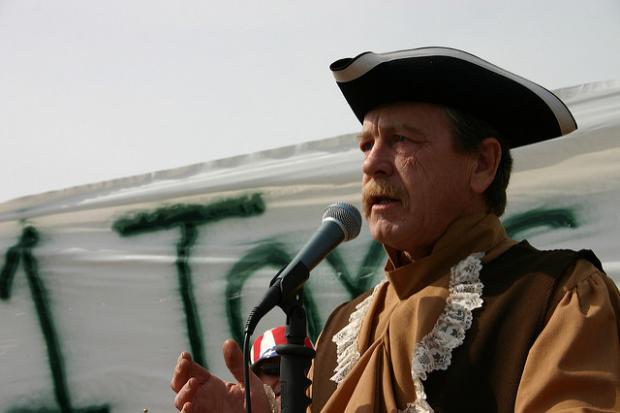 Back in May, Acting Erie County District Attorney Michael Flaherty accused local anti-toll gadfly and Paladino sycophant John (a/k/a “Rus”) Thompson of felony voter fraud. He was offered a plea deal to one felony count of false registration, which Thompson rejected. A grand jury then indicted Thompson in June on five felony counts.  Some outlets are now reporting that the Acting D.A. may simply dismiss the cases against Thompson, “in the interest of justice” [sic]. Thompson is scheduled to go to trial in January.

This might, indeed, happen. It depends on whether you think Thompson knowingly and intentionally committed voter fraud, or whether you think he’s too stupid to know that he’s supposed to vote where he lives, as opposed to wherever he feels like. Take your pick — those are the only two choices.

1. In early October 2014, Rus’ wife, Julianne M. Thompson transmitted a note to the Erie County Board of Elections, stating, “[p]lease remove us from the Erie County voter roles [sic] & from the EC BoE mailings. We are moving out of Erie County.”

2. Although Rus and Julianne Thompson moved to Niagara County in October 2014, Rus never registered to vote at his new address, and still appeared on the voter rolls on Grand Island.

3. Among the requirements to register to vote in New York, one has to have resided at his current address for the immediate preceding 30 days, and “not claim the right to vote elsewhere”.

4. The law is clear; you don’t get to vote where you work, or where you feel like, or where your “heart is”; you vote where you live. If you change your address, and plan on voting at your new domicile, you should notify the Board of Elections as soon as possible, but at least about 20 days before an election.  If you want to keep voting in the town from which you’ve moved, that might be possible, but it’s illegal. It’s voter fraud. After all, you don’t live there anymore, and you are no longer a constituent of many of the people for whom you’d be voting. After October 2014, Rus Thompson was legally ineligible to vote on Grand Island or in Erie County.

5. Despite his ineligibility, Thompson voted in at least two elections on Grand Island in 2015. Specifically, on September 10, 2015, Thompson found himself absent from the voter rolls, and used an affidavit ballot, swearing that he currently resided at his former address on Grand Island. This was a lie, and he swore that everything on the “affidavit oath” was true under pains and penalties of perjury. After Thompson rejected the offered plea, his lawyer complained that the law was seldom enforced, and that at one time Susan B. Anthony had been prosecuted under that very statute.

Sidebar: she wasn’t. Thompson is being prosecuted in state court of alleged state crimes. Anthony was “prosecuted in federal court under federal law for violating” a New York state law prohibiting women from voting. Anthony voted in a district where she had no right to do so, because females couldn’t vote. Whereas Anthony committed a crime as a form of activism to highlight that women did not have equal rights, Thompson voted where he had no right to because he’s a bigshot on Grand Island and nowhere else. It is downright comedic to compare a disenfranchised female in the 19th century attempting to exercise her rights as a citizen, to a politically connected guy who inadvertently disenfranchised himself due to ignorance, arrogance, or laziness.

How many millions of Americans vote every year in places they do not literally sleep but where they have a business or a strong personal attachment? Consider all the students who are on campus who vote at their parents’ address. Or people with two residences. Or hundreds of thousands of others who moved but did not change their registration and voted.

Students at college don’t generally consider themselves to be residents, and vote absentee back at their permanent address. Rus Thompson had been evicted from Grand Island in October 2014, and tried to vote their in September 2015 despite the fact that he was then domiciled in Niagara Falls. People with two residences have to declare one as their primary domicile for tax and voting purposes, and they can’t just arbitrarily switch between the two at a moment’s notice. Anyone who votes where they work, as opposed to where they live, is breaking the law. You register to vote where you are domiciled, not anywhere else. It’s not prosecuted that frequently because it’s black-letter law. The requirement that you vote where you are domiciled is not arbitrary, capricious, or any big surprise to anyone with the capability of reading the words on a voter registration form.

Thompson says lawyers researching the case have not been able to find another fraud case of voting where you did not sleep that the Erie County District Attorney’s Office prosecuted. The only cases in New York State appear to be two cases where actual candidates (not merely voters) voted in places they did not live.  These were prosecuted with no one doing any jail time. Those cases were seen as politically motivated.

It’s been long established in common law that as long as a voter does not vote twice, “home is where the heart is” and a voter does not have to sleep every night in a locale to vote there. Thompson was registered to vote in Grand Island.

This is a novel legal concept: “home is where the heart is”. No, a voter doesn’t need to “sleep every night in a locale to vote there”, but where they vote is supposed to be their primary place of residence; their domicile. In September 2015, Rus Thompson received his mail at his home in Niagara Falls. By law, when he moved away from Grand Island he was supposed to do things like notify his insurers, notify the DMV to change his registration, change his voter registration, etc. Failure to do these things might result in, e.g., voiding your insurance policies.

Typically, Thompson blames everyone but himself for his criminal behavior. It was former Grand Island supervisor Mary Cooke’s fault, he claims, due to some small-town vendetta the two have against each other. He blames the election inspectors who, in September 2015, recognized Thompson and suggested he vote via affidavit ballot, likely ignorant of the fact that Thompson’s name wasn’t on the rolls because; (a) he no longer lived on the Island; and (b) his wife wrote to the Board of Elections informing them of the family’s move out of the county.

Honestly, I don’t really care what happens to Rus Thompson in this case.If he’s convicted, the facts and law justify that result. If the charges are dropped, or he is acquitted, it has no effect except to suggest that the domiciliary restrictions on voting are amorphous or non-existent.

Ultimately, if the jury, judge, or prosecutors believe that Rus Thompson knowingly and intentionally voted in an improper venue, lying under oath that he lived in a place where he didn’t, he should be convicted of a crime — maybe a felony, if appropriate, but maybe some misdemeanor or lesser offense. If they think instead that Rus Thompson was too stupid or ignorant of the rules, and did this all by accident, then he might be acquitted due to the lack of requisite intent.

To prosecute a crime, the state must prove that the person committed the illegal act, and that he did so with the requisite mental intent. For instance, intentional homicide is called murder; accidental homicide is called manslaughter, and the two are punished differently because of the person’s mental state. Rus Thompson tries to blame some political enemy — whether Mary Cooke or Michael Flaherty — or some unsuspecting, well-meaning election inspector for his own bad acts. Rus Thompson committed the unlawful act: he lied under oath in order improperly and illegally to vote in a town where he didn’t live. The only question has to do with his state of mind at the time: was it intentional or ignorant? Malicious or stupid?