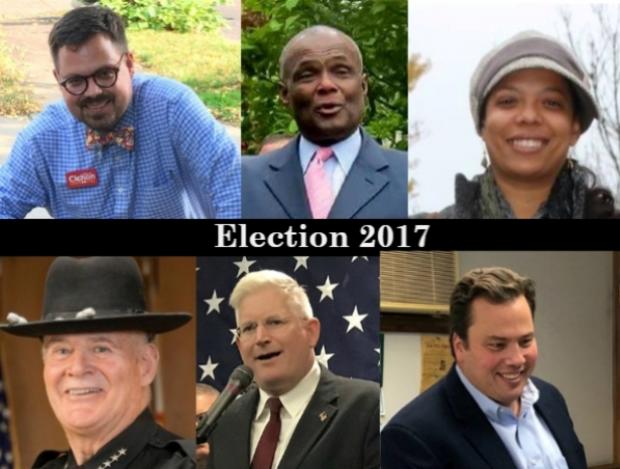 The Democrats lost all three countywide races; Mickey Kearns defeated Steve Cichon for clerk, Tim Howard just barely bested Bernie Tolbert for Sheriff, and Stefan Mychajliw dispatched Vanessa Glushefski 55-45. Democrats can take some comfort in the fact that they were competitive in all of these races, and that two newcomers did pretty well against people who are household names. It is funny that we elect the clerk and the sheriff, as these are positions that require their incumbents to be good administrators and little more. The deputies and assistant clerks do the real work, and neither Mr. Howard nor Mr. Kearns will have “setting policy” included in their respective portfolios. It ought not be forgotten, however, that Mr. Howard goes out of his way to sell himself as the guy who will disobey the NY SAFE Act, and will enable his deputies to inquire of people’s immigration status.

The activist groups like SURJ who have worked tirelessly to inform the public about Mr. Howard’s record, with their #fireHoward hashtags and protests and pickets ran into a harsh reality last week. When Tim Howard says he’s going to extra-Constitutionally break the law, or pledges to harass suspected immigrants, or is accused of mismanaging the jails: It’s not just that some Democrats don’t care, but that they like it.

One major takeaway is that registered suburban Democrats are more conservative than their counterparts in the City of Buffalo. Although Democratic turnout was higher this year than in 2013 and 2015, that did not inure to our countywide candidates’ benefit; waking up “lazy” Democrats—2s and 3s—didn’t necessarily help. And when I say “suburban”, I don’t just mean Clarence or Orchard Park. In Lackawanna, Bernie Tolbert won 2,123 to 1,745; but look at wards 3 and 4, and Howard defeated Tolbert 1,198 to 1,042. These are predominately working class white areas where Democrats like Mark Poloncarz easily secure 70% of the vote. In Cheektowaga, Howard defeated Tolbert 9,533 to 7,910—this is a town where 30,000 Democrats outnumber 12,000 Republicans. It’s quite possible that every vote brought out for Democrat John Bruso in Cheektowaga for the 8th Legislative District probably went for Howard three times out of four. In Buffalo’s South District, which is Mickey Kearns’s base of support, Tim Howard defeated Bernie Tolbert 3,399 to 3,010. In this district, Democrats outnumber Republicans by an incredible 10,795 to 2,369.

I can give you some reasons why Tolbert underperformed in those districts, and none of them are pretty. There is a cancer in Western New York, and Trumpism has done a lot to invigorate it.

Mychajliw has crossover appeal, Howard played to prejudices with his pro-guns, anti-immigrant rhetoric, and I honestly don’t know why Cichon lost; that one I don’t get. My first instinct was to suggest that it would make sense for Democrats to appeal to suburban voters by highlighting qualifications and competence, but if that was the case then Cichon—who did just that—would have won. It should be added that Cichon has similar name recognition to Mychajliw, having been a WBEN reporter for many years.

People are looking at city turnout, which was lower than it could have been, and pointing fingers at Democratic HQ and especially at Byron Brown’s machine, which they accuse of not being as aggressive in turning out people to support his former primary opponent, Tolbert, as they could have been. I saw Tolbert on TV on Election Night sporting that “22” button and, at WGRZ, had to explain to people what it meant. Translation:Tthat wasn’t communicated well at all. Tolbert won Masten 4,253 to 189, which sounds like a blowout until you realize that there are 15,198 registered Democrats and 569 Republicans there. If Masten came out 50%, Tolbert almost certainly closes his gap with Howard. In the University District, Tolbert received 4,102 to 573 with a Democratic enrollment advantage of 13,294 to 1,121. GOP turnout was better despite there being zero turnout effort.

Ted Morton’s horrible, lying, racist direct mail didn’t work. His use of the American flag as a wedge issue didn’t work. One reader analyzed the numbers in the Bruso vs. Ted Morton race in the 8th Legislative District, and comes up with some hopeful news. In 2016, LD-8 was “Trump Country,” and Trump received 57.3% to Clinton’s 36.4%. This district includes all of Lancaster and Alden, and some of Cheektowaga. If Morton received only 48% of the vote, he underperformed Trump by a almost a full 10%, and this speaks to how significant that win is. The Democrats regain (for now) a majority in the legislature.

The desperate last-minute Republican efforts to smear newcomer activist Michelle Schoeneman prove she was scaring the crap out of someone. Incumbent Joseph Lorigo, son of Ralph and Conservative fusion Party gadfly had his first real competitive race since easing his way into office, and it was closer than most expected. West Seneca is the epicenter of the Lorigos’ political influence, so you should know that Schoeneman beat Lorigo there 6,318 to 6,160, and 2,193 to 2,120 in Aurora. Lorigo’s margin of victory is thanks to Elma, Wales, Holland, and Marilla. Schoeneman lost, but she put up an incredible fight against an outrageously influential political dynasty.

In sleepy Amherst, Democrats swept the town council and supervisor’s races. Here, Erie County Republican Committee Chairman Nick Langworthy’s wife, Erin Baker, was running in her first election. Her fundraising for a town council race is simply jaw-dropping. In her July disclosure, Baker reports receipts between March and May 2017 of $50,679 in individual and partnership donations. Another $4,474 came from corporate donations, including $2,000 from “Stirling Lubricants” of Rochester. Another $6,943 came from PACs and other local campaign treasuries. Baker’s husband, ECGOP Chair Nick Langworthy, made an approximately $800 in-kind donation by fronting the cost of some campaign swag, and attorney Jeff Bochiechio provided $1,600 in food for Baker’s May fundraiser, totaling $2,488. Finally, the Eden and Buffalo GOP Committees contributed $150. The tl;dr is that for an Amherst town council race, Ms. Baker raised an astonishing $64,700 in her first ever financial disclosure, and had spent about $8,000 during the first seven months of 2017. This includes the cost of her fundraisers, her $250 payoff to secure the “Independence” fusion Party line.

In her 32-day pre-primary report, Baker’s campaign bought her lawn signs, bought some ads in the Elma Review, and made some contributions to various non-profit fundraisers, totaling about $5,000. She also transferred $5,500 to the county GOP committee, and $2,500 to the Amherst committee. An August 22 fundraiser netted Baker’s campaign $9,654 from individuals and partnerships, $500 from corporations, $1,005 from PACs and other campaigns, and $500 transferred in from the Niagara County GOP Committee. Expenditures were a mere $1935, mostly to secure the Williamsville Anchor Bar for the fundraiser. Eleven days before the primary, Baker had $53,620 on hand.

In her 10-day post-primary report, about $1,050 trickled in from individuals, and $350 from corporate and campaign donors. Her campaign sent $12,250 to the Erie County Republican committee, and spent only $544 on some other campaigns’ fundraisers and meeting expenses. Going into the general election, Baker had $42,226 on hand for her Amherst town council race.

She lost, and although she came in third in a field of five, she was the lowest recipient of Republican votes; that $250 spent for the “Independence” fusion Party line got her 750 votes.

Erin Baker raised $89,270, spent $52,178 (including over $33,250 she transferred out to various other party committees), and received 13,121 votes on all party lines. Jacqui Berger raised $17,877, spent $14,538, and received 14,418 votes on all party lines. Neither Berger nor her Democratic counterpart, Shawn Lavin, received the Conservative fusion Party line, which this year in Amherst was good for about 2,700 votes in total. So, Jacqui Berger’s campaign spent a little over $ per vote while Erin Baker’s campaign spent $1.44 per vote if you don’t include the transfers out. She spent $4 per vote if you do.

By the way, town Conservative fusion Party chairman Bill Kindel kept the C line from Joe Spino, keeping it for himself. Had Spino received that C line, he’s not likely to have won, but he’d have at least outperformed Baker. Neither the C nor I lines in Amherst did anything for anyone, and no one in town government owes those two entities anything. Town patronage hires are likely looking to get their affairs in order.

I don’t know what the answer is for the Democrats’ issues. It has nothing to do with “OMG pwn the librulz” or the red rose brigade or Hillary or Bernie. Some point to city turnout, and I’ve seen quite a few people on Facebook opine about the need for some new party to launch competitive races in the November election. We have plenty of parties already, and everyone can ask Mayor Sergio Rodriguez—not to mention Anita Howard or Terrence Robinson—all about that. We have to come to that reckoning that we have two Democratic parties in Erie County, and we have to figure out how to appeal to them both. The Poloncarz example is illustrative here: Mark is great at his job, he is smart, and whether you agree with him or not, you are likely to at least think that whatever he does is motivated by a sense of doing right by Erie County’s taxpayers. Mark is also not afraid to get into it with hecklers and take strong opinions, and then back them up. This isn’t, in the end, a challenge of ideas.

The campaign run on behalf of Republicans in Erie County this past year was outrageous and obnoxious. None of these races was about patriotism or respect for cops or the flag or the troops/ It’s not enough to link Republican candidates in suburban races with Trump and Paladino, because, frankly, Trump and Paladino are pretty popular, whether you like that or not. Linking Kearns with Paladino drew a shrug from voters. Turning out “lazy” Democrats also, as it happens, turned out a lot of reactionary registered Dems.

Is the solution to this to go even further to the left? I don’t think so, and ditto some shift to the center or right. This isn’t about ideology, but about marketing. Yet Kearns won even with that comical ad in the boxing ring, where he’s going to “fight” whilst filing people’s paperwork .

Finally, if we are to have electoral fusion, then Democrats need to be aggressive with it. Republicans and Conservatives are busy registering as Greens and Independents to influence those lines. Democrats can, generally speaking, rely only on the Working Families Party, a sort of labor imprimatur. For so long as fusion exists in New York, Democrats have to learn to play the game with creativity and ruthlessness.

Amherst showed that money isn’t always the number one factor, and that sometimes the impossible can happen. The people of Western New York deserve good, responsive government that provides a good balance between taxation, services, and getting out of our way.