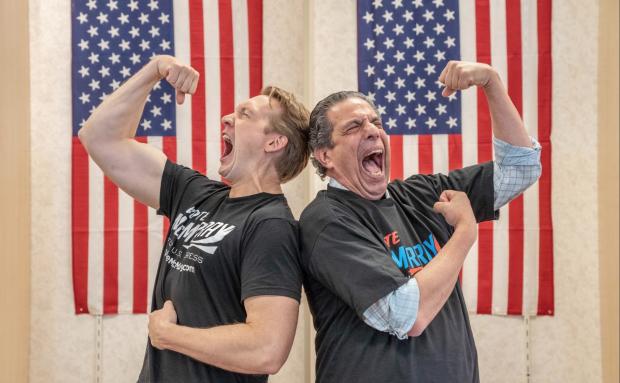 Nate McMurray has momentum and is in a statistical tie with Chris Collins. Collins, on the other hand, has seen his support effectively collapse, and there are new questions about possible illegality.

According to a Siena/Spectrum poll, incumbent indicted Congressman Chris Collins holds a barely-there three-point lead over challenger, Democrat Nate McMurray. This is well within the poll’s +/- 4.7% margin of error. This thing is a dead heat as Chris Collins’ political career of corruption, arrogance, and criminality all catch up with him. The electorate that voted for him in the past seemingly did so grudgingly, and they have largely abandoned him at the first inkling of proper legal peril.

This all jibes with Nate McMurray’s internal poll, which he announced last week, showing a dead heat.

This is what 10 years’ worth of using elected office as one’s personal peerage amounts to for Collins — if you are sent to Washington to represent people, your refusal to meet with or put yourself out there and listen to people is fundamentally disqualifying. This was a R+11 district that is now a tied toss-up.

I don’t think that’s due solely to the felony indictment for insider trading. I believe that even Republicans tolerate Collins rather than genuinely like or support him. He pulled some support for his relentlessly deep-throated defense of President Trump on cable news shows, but that was only able to take him so far. Collins lives in a stratosphere wholly different from practically every other western New Yorker, and nowhere is that more evident than in this particular rural, economically modest district.

Even now, in the middle of the campaign of his life, Collins sneaks around the district, showing up to sparsely attended, Republicans-only events to take some awkward pictures with his few supporters. Meanwhile, Nate McMurray is all over the district, drawing bigger and bigger, enthusiastic crowds who want to hear someone talk about issues that matter to them. McMurray is on the air now in this TV-friendly district, and his ads are positive and patriotic while Collins’ are relentlessly negative and hateful, like their paymaster.

Independents are breaking to McMurray, as are people in Erie County generally. McMurray has some catching up to do, and rumor has it that he will be added this week to the “Red to Blue” list through the Democratic Congressional Campaign Committee, which will help considerably with crucial fundraising McMurray needs.

Tellingly, last night when Spectrum News’ Ryan Whalen called around to the campaigns to tell them about the poll and solicit a comment, Collins refused.

Tomorrow morning Spectrum News will release our Siena College poll for the NY-27 race. @CollinsNY27 says he will not be available to respond. We have put in several interview requests since he resumed his campaign. We are planning to speak with @Nate_McMurray and @NickLangworthy

Speaking of fundraising, if you take a look at Chris Collins’ latest disclosure, it’s pathetic and might show evidence of illegality.

In the wake of his indictment, Chris Collins’ campaign raised a mere $32,000. Of that, only $6,210 came from actual humans — the rest came from special interests looking to buy influence. Of that $6,200 from real people, only $2,325 came from anywhere near the district. The rest is from deep-pocketed out-of-staters. The Collins campaign has absolutely zero credibility, zero momentum, and nothing much to tout, which explains its relentlessly negative campaign to destroy McMurray.

But this item was especially interesting in Collins’ disclosure:

Why is Chris Collins flying private jets and billing that to his campaign? That’s generally illegal in a House race.

According to the Buffalo News’ Jerry Zremski’s reporting,

Collins took [the private jet] from New York to Buffalo on Aug. 8 to meet with the media after his indictment, said Collins campaign spokeswoman Natalie Baldassarre.

You may remember that August 8th was the date of Collins’ indictment, and he famously held a big press conference at the Avant. As I described it at the time,

Collins held a “press conference” at the Avant Wednesday night. He kept the media waiting 90 minutes past the scheduled start time. He and his wife came out to the podium, and Collins engaged in languorous autofellatio about what a great businessman he is, and how he wants to abolish multiple sclerosis. He insisted that he’s innocent, will defend himself vigorously, but will not take any questions at this “press conference”. Instead, he’s going to stay in Congress, run for re-election, and not respond to one question about these charges outside of court, ever.

He kept the press waiting longer than it takes to fly from JFK, Newark, or LaGuardia to Buffalo. There are 24 scheduled non-stop flights from the three New York area airports today on JetBlue, United (CommutAir), and Delta (Republic and Endeavor Air). Chances are it was similar on August 8th. But that’s not how indicted Congressmen roll. They fly private and pay a fortune for the privilege to which they feel entitled.

Why fly like us plebes when this is within reach?

Nate McMurray is on the stump throughout NY-27 talking to real people about their questions, concerns, problems, and hopes. He will meet with anyone and you don’t have to pay him in advance for the privilege. He’ll listen to people and has empathy for the issues they bring him. On the issues, he’s a smart, knowledgeable, and wholly un-extreme. Every time a Collins ad runs, it ends with “take Nate McMurray at his word”, and the electorate is doing just that. Collins’ ads are so hilariously negative (or, in one instance, racist), that they’re probably backfiring. While McMurray is offering a positive and patriotic message, Collins’ media blitz makes him seem like the grumpy old troll who lives under a bridge to avoid the cameras, lights, and people. He’ll keep hitting and a McMurray who ignores the ads and offers instead a positive and hopeful image, protecting people’s farms and businesses and ensuring that everyone has health coverage.

Right now is when Nate McMurray needs your help — write postcards, make calls, canvass, or donate. Or any combination of those. Sure, the district might overwhelmingly support the President, but do we really need an accused criminal representing us in Congress? Naters gonna Nate.