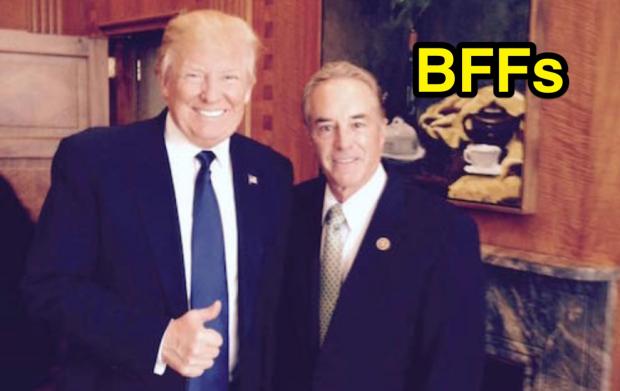 Here’s a quote from Erie County Republican Committee Chairman Nick Langworthy, which I assume he said seriously and not at all as a joke:

“My opposition went on television saying they were going to sue us in every direction because they want to win this seat on a technicality,” Langworthy said. “They know damn well that Nate McMurray can’t beat a clean Republican candidate. But I am confident that we have Congressman Collin’s cooperation, as he said to you, in your exclusive interview, but also that we have the best legal team in the state of New York, in the U.S., on this. I have confidence that we’re going to work as one and make that substitute happen.”

What this is all about is the farcical and unprecedented effort the Republicans are considering to replace Chris Collins on the November ballot in the race for NY-27 with someone not under felony indictment.  Channel 4’s Dave Greber interviewed Collins and his opponent, Democrat Nate McMurray, this week, and they were eye-openers. There was Collins in his office — one last stage-managed event — whining about how the FBI came to his home (which one?) at 6 in the morning to chat about insider trading. The transcript is here; here’s a telling excerpt:

DAVE
When did you first learn of the federal charges, when were you first tipped off about that?

COLLINS
When they knocked on my door on April 25 at 6 AM.

COLLINS
That was the shock of all shocks. To have, as it turns out, two agents at your door at 6 AM, saying they just want to talk. As it turns out, they don’t read you your rights, they don’t tell you you could have an attorney, they don’t tell you while you’re there. It’s just, a we’d like to talk. And the next thing you know, of course you’re innocent, you invite them in. I’m in a bathrobe, and bare feet and just got out of bed and I chatted with them for 45 minutes or so. They wanted to know about my involvement, and I shared everything from A-to-Z. And then at the end of it all, they said, oh by the way, we have a subpoena for you.

Now, imagine you’re a multi-millionaire businessman and you’re already the subject of an ethical investigation in the House of Representatives, to which you were elected; you know you’re under scrutiny. It’s April 25th and the FBI is at your door at 6:00 a.m., but Collins plays victim, suggesting that something shady went on. He wasn’t arrested on April 25th, and the FBI won’t read you your rights or tell you you have a right to an attorney until and unless you’re in custody. Collins should know this as a lawmaker, but also as a person under felony indictment — he wasn’t arrested until mid-August.

It doesn’t really matter who you are — common sense would dictate that, if the FBI shows up at your house at 6:00 a.m., you ask to see their warrant. You call a lawyer. You don’t just invite them in for a chat; it’s not a social call. If literally anyone showed up unexpectedly at your door that early in the morning, you’d first call the cops or else ask to see the warrant.

This was a campaign pitch — maybe for some unnamed Republican to replace Collins, but at least for a pardon. The Trump tchotchkes, (e.g., the “Fake News Network FNN mug behind Collins’ head), were the giveaway.

I think Collins letting the FBI in to chat at 6:00 a.m. like he was expecting them is evidence of a guilty conscience. He knew why they were there; he knew the subject matter of their inquiry. He was trying to talk his way out of it; to throw his weight and prestige around to yet another bunch of poors.

But look at the date — Collins was approached and subpoenaed by the FBI for allegations that he engaged in insider trading and fraud on April 25th. He was already under Congressional investigation for possible insider trading as early as October 2017.

Shortly after the private placement purchase, legislation that Collins authored to speed up clinical trials of drugs was signed into law as part of the 21st Century Cures Act and the company’s stock price tripled shortly thereafter. The stock price plummeted in June, however, when the company announced its lead drug failed to help secondary multiple sclerosis patients in a clinical trial.

All of this was out in the open in 2017. The FBI came a-calling in April 2018. The Republicans — and Nick Langworthy — knew they had a problem to address a year ago. They didn’t; they ignored it.

Petitions for Congress hit the street on March 6th, and were due in mid-April. The primary was in late June. Someone credible could have primaried Collins and taken the fight to him. Some Republican, surely, believes in the rule of law and that corrupt politicians under investigation shouldn’t be re-elected without a battle. But alas, none stepped up. They knew Collins was ethically dirty, but went with him anyway.

The Republicans are banking on their ability to manufacture a phony, fraudulent “vacancy” by running Collins for some town position somewhere like Eden. Then they have a September 19th deadline to fill the “vacancy”. Then voila! Congressional candidate Carl Paladino or whatever other alt-right frotteur they can convince to run and self-fund.

DAVE
Is that difficult for you to campaign, knowing that you are Nate Mcmurray potential he campaigning against a question mark?

MCMURRAY
There is some challenges there for sure, but I will say this. I’m really campaigning against Team Collins, Team Collins and all those surrogates who supported him, propped him up and told you even to a few weeks ago, that this is someone you should vote for. When they knew better. So to the end of this campaign, I will be campaigning against that system, and I’ll be working to break the party machine that brought you Mr. Collins and told you to vote for him again and again and again. If I was a Republican voter, who donated to the party, who donated time to the party, who committed to the party, and I was taken advantage of in this way, I would simply give a protest vote for them, saying we need change. I would ask all those involved to fight against the system. They took advantage of you, they used to you, they exported you. It’s time for you to fight back. If you don’t fight back now, when you have a guy like Chris Collins endorsed to be your senator, and now you have this gamesmanship at the last hour to save the face of the party bosses, when will you stand up? It’s time for everyone to stand up and say look, business as usual must end.

There’s no precedent for this. These whiny clowns were with Collins after October 2017, when a Congressional ethics board said Collins may have engaged in illegal conduct; they were with Collins after April 25th, when the FBI showed up at Collins’ door; they were with him right up until the indictments hit, and then they started scrambling to defraud the electorate. The deadline for Collins to decline the nomination passed on April 16th. As Buffalo Attorney Frank Housh explains on his law firm’s blog,

…when a candidate seeks to disqualify himself from an office for which he was nominated but did not timely decline, he “must present a legal basis for doing so” other than being nominated for a different office.

“Oh, shit a grand jury indicted me for securities fraud and lying to the FBI” is not a legal basis for disqualification.

So, let’s swing back to Langworthy’s “poor me”.

My opposition went on television saying they were going to sue us in every direction because they want to win this seat on a technicality,

The Democrats are going to sue your committee in “every direction” because you’re attempting to perpetrate a fraud on the electorate in NY-27.

Maybe you should have run one, then. Not now, in mid-September as part of some ham-handed, extra-legal do-over, but ab initio; from the get-go.

But I am confident that we have Congressman Collins’ cooperation, as he said to you, in your exclusive interview, but also that we have the best legal team in the state of New York, in the U.S., on this.

Oh, yes. The best legal team actually in CHRISTENDOM. IN THE UNIVERSE. Collins’ “cooperation” merely means that he’s willing to participate in the fraud. I mean, participate in securities fraud, participate in electoral fraud; all in a day’s work for the worst Congressman in New York.

I have confidence that we’re going to work as one and make that substitute happen.

Meanwhile, the Democrats have a fantastic and brilliant candidate who is neither under felony indictment, nor part of any other sort of electoral, financial, or legal fraud. If you think Langworthy’s bluster is as hilarious as I do, throw a couple of bucks Nate’s way, or volunteer to get the word out.