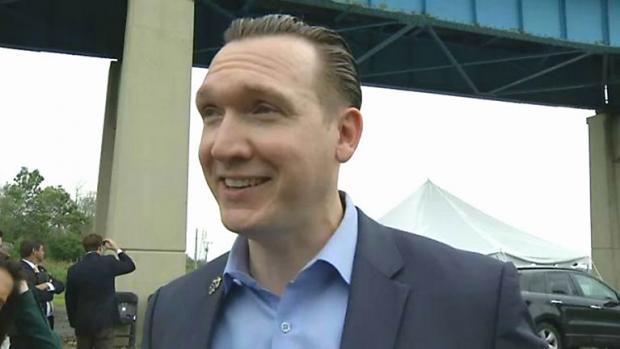 When Nate McMurray walked into Spot Coffee last Monday to talk about his campaign to unseat Republican Congressman Chris Collins in Western New York’s 27th District, he was clearly agitated. Not just high-energy, which seems to be his resting state. He was worked up, and he told me why: He’d spent that morning fielding solicitations by Governor Andrew Cuomo’s political team to drop his candidacy and make way for Lieutenant Governor Kathy Hochul.

Hochul represented the district (then the 26th) in Congress from June 2011 to January 2013, having won the seat vacated by Chris Lee’s resignation in a special election and then lost to Collins narrowly in the November 2012 general election. Cuomo is eager to shed Hochul as his running mate and replace her with a lieutenant governor candidate who will neutralize the downstate progressive appeal of challengers Cynthia Nixon and Jumaane Williams, both of whom won the endorsement of the Working Families Party this month and are mounting primary challenges to the Cuomo ticket for the Democratic line.

McMurray is vice president for development at Delaware North; he entered politics two years ago, narrowly winning an election for town supervisor in the Republican stronghold of Grand Island. He spent the first three months of 2018 navigating a crowded field of Democrats eager to face Collins, and emerged as the only Democratic Congressional challenger in the state not facing a primary. He took Cuomo’s machinations as an affront: He’d worked hard, he’d built a campaign, and his success—coupled with recent polls showing how deeply disliked Collins is personally by his constituents—had finally attracted the interest of state and national Democratic Party political leaders, who until recently had written off the 27th District as far too Republican to succumb to even the bluest of waves.

“They offered me all kinds of things,” McMurray told me, adding that there were threats, too. “‘Anything you want,’ they told me. ‘This is a negotiation, so tell us what you want.’ I told them there’s no negotiation, because you don’t have anything I want.’”

Cuomo’s team wanted him to leave the 27th to Hochul and run instead against Republican State Senator Chris Jacobs. McMurray said no, hung up the phone, and ran across the street from his office to talk to The Public. This is an excerpt of that conversation; you can read more at dailypublic.com.

The Collins campaign has tried to make much of the fact that you currently live just outside the 27th District, but you grew up there. Tell us about your upbringing.

I grew up in North Tonawanda. My father was a construction guy. Drywall mostly. He died very young of asbestos exposure. He was 39, I was three, and I had seven brothers and sisters. My mom, just 35, had a new reality: I have to raise all these kids by myself.

We struggled. As a kid, we had all the problem of people who struggle with poverty in our house. I crawled my way though high school, though I knew I was pretty smart. I started at Erie Community College, which was great for me: I had teachers who cared about me; they saw that I had some spark and they pushed me. I transferred to UB and graduated with high honors, which was something I never thought I would do. I went on to UC Hastings in San Francisco, which is a very competitive law school, especially at the time. From there I got a scholarship to study in China at Tsinghua University, which is where President Xi [of China] went—it’s a very competitive university. I learned I had this language ability—I studied Chinese, I’d learned Korean earlier. I was a Fulbright Scholar in Korea. I was hired by a British law firm, Allen and Overy; I never thought I’d live the corporate life, but I had to pay back student loans. I was recruited to go to Korea because I spoke Korean, and I worked in Korea as a lawyer for a while. I built my own practice in Korea.

I did some work for Samsung as an outside counsel. Samsung liked me, so they hired me as senior legal counsel. But I was really homesick by then. I was in my early, mid 30s, in this world I never thought I’d be in. I was, like, “Okay, I’m at a crossroads. I can stay here the rest of my life and be Mr. Korea or Mr. China. Or I can go home.”

Like a lot of people, I really love and want to be part of Western New York. I just missed it so much. This is the place I came for vacations. I was home for Christmas with my brother, and a headhunter called him and asked him, “Are you interested in Delaware North?” He said no, and I said I might be interested. I took the job on the spot.

You were recruited into politics by Erie County Democrats, but the town where you settled, Grand Island, is a heavily Republican municipality.

Yes, so I met with my now deputy supervisor, Jim Sharpe. Jim has been in the party for 40 years, struggling on Republican Grand Island, never winning races. I met him at Wendy’s and said, “What do you want me to do? I can get signatures…” He said, “I want you to run for supervisor.” I said, “Jim, nobody knows who I am.” And he said, “Well, it’s either you or me, and I’ve already run three times.”

We won by two votes. And I’m going to sound arrogant, but we’ve done a lot of good with those two votes: cashless tolling, the West River Parkway Trail. We got conservation designations for 100s of acres, $600,000 for Spicer Creek preservation. We’re going to get 16 megawatts of community solar on the island. This all happened the past couple years. This is stuff where I’m literally doing the paperwork myself. We don’t have a team. This is me figuring it out. This is me asking people.

What would you do if you go to Congress?

First of all, we’re in an emergency situation. The Congress has passed a tax bill that, by their own admission, is going to create trillions in debt. And that debt is not for some scientific achievement—it’s not to cure cancer or go to Mars. It’s not to fight some just war. This debt is for one reason only, and that’s for guys like Chris Collins to have another house in Boca Raton. This is not debt that we need. I read that in five years our interest on that debt is going to outpace our military budget. It’s crazy.

So the first thing we need to do is repeal that and shore up Social Security, which is going to be the first victim of our debt. Think about if Social Security is gone. Think about what happens to Western New York. Did you know our rural hospitals depend on Medicare and Medicaid for 60 percent of their revenue? It’s going to gut Western New York—never mind that you can no longer deduct state and local taxes, which is going to drive even more people away.

If we’re going to use our money for debt, it has to be debt that will increase the value of our country, which is infrastructure. In the past we laid millions of miles of copper wire and telephone wire. We strung electric power to the most rural communities of Appalachia. We did all that with government money.

So the second thing is to invest in infrastructure, which is not just roads and highways but broadband. Broadband is the infrastructure of the future. We’re not going to be able to run the programs that I saw Samsung developing five years ago—the kind that need next-generation internet speeds—on copper wire that was made for telephones.

The third thing is agriculture. Agriculture has got to be a national security issue. If we don’t grow food here, we have to get it from somewhere else. As soon as there’s one emergency, we don’t have that food. It is literally a national security issue. So crop insurance, milk insurance. Look at what farmers want in the farm bill: They want a steady supply of labor, because there are not enough people living in dairy country anymore; the second thing they want is to make sure that nutritional bills are included in the farm bill, like WIC, like food stamps. Those programs are not in there now; farmers want them in there, because those programs supplement farmers.

With the amount of arable land in this country…China isn’t like this. You can’t grow tomatoes in your backyard; the soil isn’t good enough. It’s mostly desert. We’re blessed with black earth that can grow almost anything. A place like that should be abundant, and no one in this country should go hungry, and no farms should be struggling. But we’re not investing in those farms, so they can be successful and we can sell that produce to other countries, so we can become an agricultural powerhouse. Its the biggest industry in New York State and it’s considered an afterthought, it’s considered something we used to do a long time ago.

Now Chris Collins is fighting for tariffs to protect our farms, but really what we need to do is find markets for our farm goods. There are markets for US products. Trump is right about this: We need to be better at how we trade. I think we have been taken advantage of in trade deals. Tariffs are not the answer; better deals are the answer, and there are ways we can get them. One is we can leverage our national strength, which is agriculture.

Assess Chris Collins for us.

I think his demeanor represent how he feels about us, how he feels about working people. he doesn’t want to be seen with us, unless we pay. He’s only around when it’s campaign season. He just doesn’t care. And the fact that he just doesn’t care shows. Take that tax bill: Chris’s Republican colleagues in New York State, except for one, didn’t vote for it, because they knew it would kill New York State. Collins is representing us; he’s not a surrogate of the president or anyone else. He is supposed to represent us, first and foremost, and he’s not doing it. He voted for a bill that kills us—it’s going to kill Social Security, it’s going to kill our rural farms.

So number one, he doesn’t care. Second, has his personal behavior represented someone who should be a congressional representative? We’re not talking about small peccadilloes or foibles; he was found to have violated House ethics rules—unanimously, by a bipartisan board. He acts like it’s no big deal. The fact that it hasn’t gone to criminal charges? Maybe its just a matter of time, we don’t know.

Look at his tenure as country executive. I have not yet found one employee of his who has one good thing to say about him. He ran the county executive office with hackneyed bogus business talk and strategies, and all it did was undermine the city of Buffalo and Western New York.

I believe my record in two years as Grand Island supervisor outpaces his. What can he point to? The one thing is the tax cut, and that tax cut does nothing but hurt most people in Western New York. For the people who do get benefits—except the very most elite among us—it’s a temporary taste. There’s a sunset provision that it goes away. It’s for the long-term benefit of Collins and his friends.

So that’s what I think about Chris: He doesn’t care about Western New York.

Read more of our interview with Nate McMurray tomorrow.