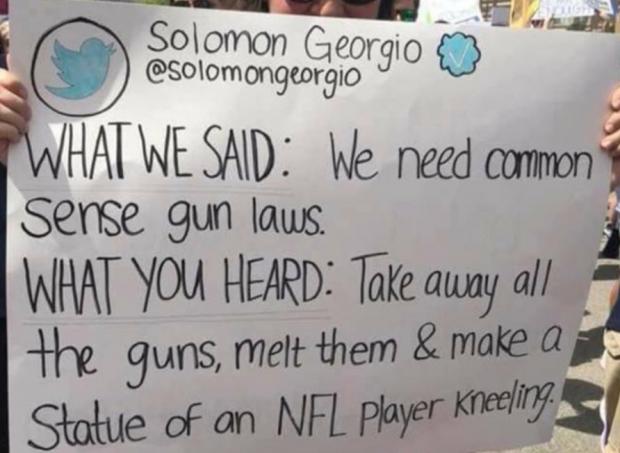 1. Former SCOTUS Justice Stevens is a Republican. President Gerald Ford nominated him to the Court in 1975.

2. Neither Democratic candidate for NY-27 Nick Stankevich nor Nate McMurray are “radical extremists”; neither of them has uttered a syllable in support of a repeal of the 2nd Amendment. This is nothing more than Collins trying to rile up a rural, NRA-supporting base that doesn’t like fancy lawyers like McMurray, Slavic names like “Stankevich”, or — more significantly — rich, entitled, city slicker assholes like Chris Collins very much.

3. Everyone take note that Stankevich and McMurray marched against mass school shootings this past weekend, but Chris Collins is completely and utterly silent on the subject. While Stankevich and McMurray stood with schoolchildren who are tired of being sitting ducks for well-armed, but poorly regulated, lunatics, Collins did what Collins does — probably diving into a basement pool of gold like a cartoon duck or something

4. Collins’ spokeskid ends this stupid missive with a demand that Stankevich and McMurray “let voters know” if they support calls from Republican former SCOTUS Justice — or as the spokeskid says, “far-left” — to repeal the 2nd Amendment. He adds, “if radical extremists want to make this election a referendum of the 2nd Amendment, we look forward to that debate”.

That last line is nonsense. Chris Collins will not debate his opponent, not ever. He will not agree to hold a town hall in his own district to listen to constituents who might disagree with him. He won’t hold a public debate with anyone who disagrees with him, going so far as to hold a private meeting with Stankevich in Washington a week or so ago, but no one could hear what either one said, and neither one’s stance could be vetted or challenged. When Collins last trotted out this “let’s have a debate about guns” line, County Executive Mark Poloncarz took him up on the offer, but Collins chickened out.

Locally, Clarence High School senior Andrew Kowalczyk is one of the organizers of that school’s recent anti-gun-violence activism. Clarence High School is an easy walk from Collins’ own Spaulding Lake home. Kowalczyk was one of the organizers of that school’s walkout, and appeared several times on WBEN as part of its massively disingenuous effort to kick off a reasoned debate about mass shootings. He is a smart and well-reasoned young man who is neither “radical” nor “extremist” nor “far-left”.  He is just a high schooler who doesn’t want to see any more of his peers gunned down. Kowalcyzk and high schoolers like him are the people who organized the massive “March for our Lives” action last weekend. It wasn’t a march to ban guns, confiscate guns, or abolish the 2nd Amendment; it was a march to protest the mass murder of kids, and to find Constitutional solutions to the problem.

There were a lot of moms, dads, and kids at those marches. You call them all “radical extremists” at your peril; the only reasons you’d use such laughably extreme hyperbole is if you’re scared, and you need to rile up a shrinking base.

In any event, here’s what Stankevich has to say on Facebook about repealing the 2nd Amendment: Here is what Nate McMurray has to say about it: and, at a public forum (or as Collins calls it, “Kryptonite”):

Kowalczyk and others are organizing a forum on gun violence to be held on April 7th. Representative Brian Higgins will attend. So will Stankevich and McMurray. Collins — who claims to “look forward to” a “debate” on the 2nd Amendment will be conspicuously absent. But not just absent — hostile. Another of Collins’ (not campaign, but Congressional) spokespeople said:

Sadly, radical partisans have co-opted the Parkland tragedy in an effort to score cheap political points.

Oh, do tell me more. Tell me more about how many kids have been gunned down in how many mass school shootings since the late 90s. Tell me how they’re all “radical extremists” or “radical partisans” because they dare challenge the notion that homicidal cretins should be able to own a military arsenal, so as to maximize killing efficiency.

Tell me more about how Chris Collins cares more about guns and gun owners than he does about the mass murder of high school kids — or, in the case of Sandy Hook, 1st graders.

In this country, an 18 year-old cannot legally buy a beer in a restaurant, but that same 18 year-old can instead take the money his mom gave him for a tattoo and buy an AR-15 and 500 rounds of ammunition in order to commit mass murder in his school.

Never fear, however, Mr. Collins. These children that you spit on, as they try to change their world, are immune to your consultation. They’re quite aware of what they’re going through.

Kowalczyk said he was disappointed but not surprised.

“He kind of closed himself off by calling us radical partisans,” said Kowalczyk, a 17-year-old senior at Clarence High School. “We’re just trying to look for solutions.”

As the kids would say, tfw a 17 year-old schools you on behaving like a responsible adult.

The Buffalo-area teens began planning the event with Collins in mind, calling it a student forum rather than a town hall.

“It’s kind of because Chris Collins has said he would never do a town hall,” said Erin Byers, a 17-year-old senior at Pioneer Central High School in Arcade who is also involved in organizing the event. “So we’re calling it a student forum. We thought that might make him react more positively.”

He didn’t. He’s cowering in the corner, afraid of a demographic inevitability.

Asked about their thoughts on the Second Amendment, both Stankevich and McMurray said they support it — and that it is compatible with reasonable gun restrictions that they favor, such as universal background checks and a ban on assault weapons.

“What I’m for is making sure madmen can’t get their hands on military-grade weapons and kill kids,” McMurray said.

Both Stankevich and McMurray also said Collins should attend the event the students are organizing.

“Those are the future voters,” Stankevich said. “They’ll be voting in the next election, if not in the election this fall. Chris Collins is sort of choosing his own adventure on that one.”

Meantime, McMurray said: “It’s an open forum. Let’s see if he can face it.”

He can’t. All he can do is trot out his spokeskids and surrogates to troll people who have a genuine concern regarding federal policy, and hope against hope that he can shore up his base and convince the handful of conservatives who don’t like him that the opposition are “radical extremists”.

Kowalczyk, the student organizer, stressed that the forum is intended to be a positive experience where lawmakers and students can interact.

Remember this every and any time Chris Collins’ name is on a ballot after this: he talks about guns like he’s some sort of bigshot woodsman alpha militia freak, but when it comes to talking with schoolkids who don’t want to be murdered, he cowers at home, hoping these kids and their parents don’t vote.