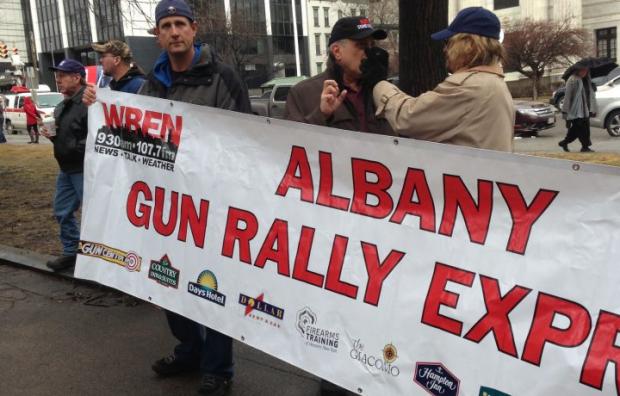 On February 14th, an expelled student returned to his Florida high school, pulled the fire alarm, and started shooting. Within a span of just six minutes, this teenager had managed to murder 17 people; 14 of them students.

It was the 8th school shooting of 2018 in the United States.

On February 14th, something snapped. The kids had had enough. Enough of being ignored; enough of being sitting ducks for lunatics with easy access to military arsenals. The kids in Florida organized. They went not just to traditional media — these are kids for whom social media is a sixth sense.

Here in western New York, our local media outlets began suddenly taking this issue of guns and school shootings more seriously than they had in the past, as well. This wasn’t just another incident that was going to get swept under the rug with empty thoughts and rote prayers.

Even the Buffalo region’s most prominent right-wing media outlet — WBEN — seemingly began to take the issue of school shootings seriously. Gone were the self-satisfied septuagenarian SCOPE spokesman, and instead there was a “12 Voices in 12 Hours” feature where the topics of gun violence and school shootings were suddenly important. Discussion was to be respectful; a conversation.

That’s quite the sea change for WBEN; the station is the official organ of the local Tea Party, where you’ll occasionally find Assemblyman David DiPietro (R-Gun), convicted vote fraudster Rus Thompson, and developer/perv Carl Paladino filling in for the “Financial Guys” with some of the literally dumbest radio no one hears.

On Wednesday, schoolkids all over America walked out of classes at 10am for 17 minutes for a variety of reasons; to honor the 17 Florida victims, to agitate for gun control, to protest against gun violence and school shootings — as many reasons as there were kids. WBEN covered this walkout with uncharacteristic respectfulness. I guess someone realized that it would not be good for ratings if they denigrated the offspring of the station’s suburban listenership.

Just a week or so ago, occasional WBEN fill-in DiPietro voted no on these two common-sense bills:

A.8976B (vote 115/20) – Extreme Risk Protection Order (ERPO) — Would establish extreme risk protection orders as a court-issued order of protection prohibiting a person determined to be a threat to himself or others from purchasing, possessing or attempting to purchase or possess a firearm, rifle or shotgun and establishes procedures for the application, administration, and expiration or termination of such protection orders. This legislation in FL may have stopped the Parkland shooter. (DiPietro voted No)

A.2406 (vote 121/14) Would establish a waiting period (10 days) before a firearm, shotgun or rifle may be delivered to a person who does not receive an approval/disapproval from the NICS system. Similar legislation in S.C. would have prevented the Charleston shooter from getting the gun he used in killing 9 at Emanuel AME Church. (DiPietro voted No)

Yet this week, WBEN — the tea party organ — changed its tune, as their air personalities and management came to the realization that the mass murder of school children may be a hot topic. Last week, I heard Clarence senior Andrew Kowalczyk essentially debate PM host David Bellavia on gun control and school shootings. I want to applaud Mr. Kowalczyk, who was eloquent and dignified beyond his years. Mr. Kowalczyk is a credit to his school and his community. He held his own against Bellavia, and advocated for his opinions and positions quite persuasively.

He also helped to organize the walkout in conservative Trump country bastion Clarence, where this happened:

Thank you to everyone who participated. #NeverAgain pic.twitter.com/LiXOtT6gsB

WBEN’s Tim Wenger took a more measured and serious tone than one would expect:

Hearing callers say “you don’t have a ‘voice’ until you’re 18 and pay taxes” is disheartening. We don’t necessarily have to agree with their views but we should listen.

The #schoolwalkout broadcast from four different locations across WNY on @NewsRadio930 this morning demonstrated a remarkable difference in how students came together and peacefully communicated their messaging. Well done. pic.twitter.com/SQUie62mpD

Mr. Wenger, who is the Operations Manager at WBEN, has not, however, been shy in the past about showing his disdain for protests with which he doesn’t agree.

So all of this — WBEN’s ”12 voices”, Wenger’s sudden respect for teens — all of it smacked of concern-trolling; all of it reeked from disingenuousness. Consider the other 360-ish days in any given year, when WBEN in particular is like flypaper for the most radical and extreme gun supporters. You know who they are.

After Sandy Hook, I wrote often and extensively about the 2nd Amendment. I wrote an article (with apologies to the Buffalo Beast’s Ian Murphy) called “Fuck Your Gun”. All that rhetoric about how the 2nd Amendment exists to enable suburban dads and rural welfare recipients to battle “tyranny” is garbage. The 2nd Amendment enables citizens to possess firearms for protection and for lawful purposes like hunting and other sport. You don’t get to take up arms to battle the government. You don’t get to play Ruby Ridge or David Koresh from your subdivision’s model home.

In response to Sandy Hook, the New York legislature passed the NY SAFE Act, a basket of various regulations aimed at preventing mass shootings. You’d have thought that Kenyan communist Muslim Obama had conspired with “il Duce Cuomo” to take away all the guns. Against that backdrop, in December 2014, WBEN sponsored a bus to take listeners to Albany to protest the new law. Here’s the banner they used at the protest (it was on display in Entercom offices for some time afterwards) — the banner is paid for and sponsored by Carl Paladino’s various corporate entities. I don’t know who paid for the bus, but WBEN offered wall-to-wall coverage of that demonstration during the ostensibly straight morning newscast, as well as the opinion programming later in the day.

I mean, does this seem like objective journalism or advocacy and propaganda? If any other nominal news outlet tried to pull a stunt like this, it’d be a scandal.

Therefore, when you examine “12 Voices in 12 Hours” against the backdrop of the “Gun Rally Express”, the only reasonable conclusion is that WBEN is merely feigning respect for the students and their walkout. Sure, they’re treating these brave young adults with kid gloves now, but never lose sight of the fact that their genuine loyalties are inexorably with the NRA and the ammosexual lunatics who can take time off to take a free bus ride to Albany to agitate for the right to own and possess a military arsenal. Why? Because they believe the 2nd Amendment to be somehow absolute or not subject to any governmental restriction whatsoever. Yet, like it or not, the SAFE Act is Constitutional.

I am not against the 2nd Amendment; I recognize the individual’s right to bear arms for self-protection and for legal activities like hunting. I am also, however, anti-gun, and I am anti-slaughter-of-schoolchildren. So, I support the student walkout,  and applaud the kids whose political consciousness is now awakened.

I encourage and admonish them to be especially wary of right-wing media in Buffalo peddling phony concern and an insincere search for solutions, when just over 3 years ago, they were all “GUN RALLY EXPRESS!”