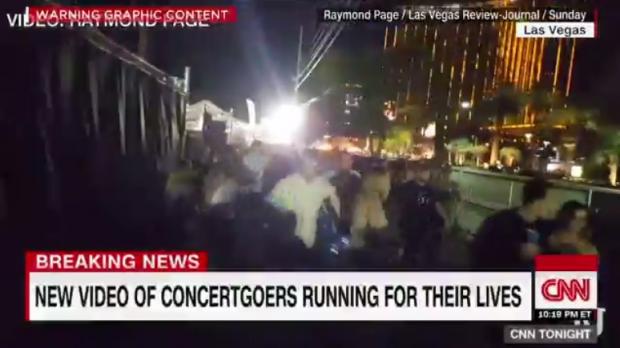 The reason why most homicidal jihadist maniacs in Europe use homemade bombs or mow pedestrians down with cars is that it is exceedingly difficult to obtain a gun in those countries. It’s not impossible -  nothing’s impossible — but it is very difficult. In fact, in some cases, the European attackers couldn’t even rent the bigger truck they really wanted to use to mow people down, and had to settle for renting a Ford Transit van. It’s like all the trite, jejune pro-gun retorts about banning cars come to life.

Yes, I know Switzerland has a lot of guns. The Swiss also take responsibility, order, and discipline seriously. If you want to make us more like Switzerland, that’s a conversation with which I am totally cool.

I have resigned myself to the reality that America lacks the foresight or political will to do a thing about mass shootings. The 2nd Amendment, as recently interpreted by the Supreme Court, guarantees an individual’s right to possess and own a firearm for hunting, sport, and protection. States can, however, impose restrictions on the ownership of certain types of firearms, and New York’s own SAFE Act passes Constitutional muster, despite what somebody’s lawn sign might say.

Some random guy set up an arsenal of weapons in a casino hotel and then rained bullets and death at people below who just wanted to hear some music. Just under 60 people killed and over 500 injured, and for what? How is that “freedom”?

How do you reconcile “liberty” with an inability to peacefully enjoy an outdoor concert? Why does the freedom to own an arsenal of weapons and ammunition trump a citizen’s freedom to listen to Jason Aldean without having to duck for cover or “get small”? Why does the freedom to outfit oneself with the ability to shoot thousands of bullets at innocent people over the course of 10 minutes outweigh the right of those concertgoers to not have bullets shot at them in such volume, at such rapid succession? Why did Adam Lanza’s right to bear those arms outweigh the rights of 20 first graders to see their next Christmas? Where was liberty and freedom for those kids and teachers? The kids’ parents? Are they more free? Would they be more free if they lived in a country where guns like that aren’t available, like the UK or Canada, but their kids were alive?

In Congress, concerned lawmakers bleat about “mental health” while pocketing blood money from the gun industry lobby. Yet when proposals are put before them to restrict gun sales to people who have been adjudicated to be mentally ill,  they reject them. When they are given an opportunity to ban gun sales to people on the FAA/DHS no fly list, they reject that. Objectively speaking, why isn’t that political suicide, to back the sale of literal arsenals of weaponry to the mentally ill or suspected terrorists?

Here is some choice verbiage from our own Rep. Chris Collins, from just this week:

At a closed-door meeting of House Republicans on Tuesday, there was talk about what happened Sunday in Las Vegas, but, according to several members, little was said about a legislative response.

“We all discussed the tragedy and certainly all of our thoughts and prayers go out to them, and that was pretty much the total extent of it,” said Rep. Chris Collins (R-N.Y.).

Thoughts and prayers, and let’s move on to financing a massive tax cut for millionaires by hiking taxes on the middle class.

Collins added that Congress ought to focus on mental health rather than gun restrictions: “We are not going to knee-jerk react to every situation. The Democrats continue to want to say, when a mentally deranged person does what they do, it’s the gun’s fault, not the shooter’s fault. . . . People focused on mayhem and the kind of evil this person was — in their heart, you can’t stop them. They will do it one way or the other. You can’t stop a mentally deranged person.”

“You can’t stop a mentally deranged person”, except perhaps with universal access to mental health care and appropriate treatment and medication. They’ll do it one way or another, so let’s not restrict the number of available “ways”? Choosing to commit murder may not be something you can legislatively prevent, but limiting the extent of that murderous intent is. No one can perch 32 floors above a concert and in 11 minutes kill 60 people, wounding 500 with a knife, or even with a pistol. Pretending there’s nothing that can be done is stupid; restricting one’s response only to thoughts and/or prayers is depraved.

After all, when Chris Collins is asked to guarantee universal health coverage to every American — including for mental health treatment and medication — he told the Batavian,

The Democrats want universal health care, no if ands, or buts. Hillary Clinton wanted that. Barack Obama wanted that. They never could get there and that’s when we ended up with the abomination that I call Obamacare…The life I live is here now, and Republicans will never support universal health.

So, Congress should “focus on mental health” but will “never support universal health”. In other words, get yourself the psychiatric care you need, if you can afford it, and voila! No more mass shootings!

Rep. Collins admits he wasn’t able to read entire health care bill and had to rely on staff https://t.co/5NN39ElZAj https://t.co/UmK3tuCfFC

Just as every civilized, 1st world country has seemingly figured out how to guarantee universal health coverage, every 1st world country has devised a way to prevent most mass shootings; after Dunblane, the UK acted.  After Port Arthur, Australia did more than just offer up a round of thoughts and prayers. There are horrific exceptions, obviously, but how many mass shootings has, e.g., Norway suffered since Anders Breivik?

There is a way to reconcile the 2nd Amendment with the people’s right to attend concerts, clubs, or school without being massacred.

I have written more about this topic than I care to admit. The right to bear arms is not absolute; it is not unrestricted or unrestrictable. The 2nd Amendment doesn’t grant you to the right to arm yourself for civil war or insurrection, nor to water the tree of liberty with people’s blood.

That tree is inundated.

“Thoughts and prayers” are garbage — here’s audio Chris Smith and I did with Brad Riter on that subject for Trending Buffalo in 2013, after the Boston Marathon bombing. When a jihadist murders people, we don’t just think and pray, our current government tries to ban immigration and visitation of Muslim people. But when something like Las Vegas happens, Washington stands silent and still, waiting for the heat to blow over so they can get back to lifting restrictions on suppressors, or distracting us with culture wars about the National Anthem.

Almost exactly two years ago, in October 2015, I wrote about our mass shooting leitmotif. Nothing has changed since then, reminding us of the anecdotal definition of insanity. In 2016, after Orlando, I wrote about how social media reactions generally suck.

After Orlando, Representative Chris Collins blasted President Obama and anyone else who suggested any tighter gun restrictions.

“No…it’s actually quite shameful. Our president politicizes every tragedy with a suggestion to Americans that some sort of gun legislation to take away Americans’ second Amendment rights would stop this from happening, and that’s just not truthful. In fact, it’s an outright lie. When you think about it, this was a security guard who obviously had weapons, and it…anything that the President would have suggested, this person still would have had his weapons, and unfortunately the tragedy still would have occurred.  We should be focused on the root cause, which in this case is ISIS — it’s Islamic terrorism, it’s those who don’t respect America’s way of life, who hate women, who hate gays, and hate America.  And that’s the difference you saw yesterday — we need to identify the enemy — it is ISIS, we need to take the fight to them and we shouldn’t try to divide America, and especially suggesting that there’s some sort of law we could pass that would stop ISIS, whether this was a lone wolf or not, from attacking Americans. So, I was very … not pleased at all with the response of the President, Hillary Clinton, or Chuck Schumer, who yet again are politicizing tragedy.

When a particular problem has a political, governmental set of solutions and nothing is done, that is already politicized. When you motherfuck the President and an opposition political figure to make a political point, you don’t get to whine about politicization. Who’s keeping us safe, Collins? Who’s putting “America” first?

Way back in early 2013 — soon after Sandy Hook, and around the time the New York legislature passed the SAFE Act, I wrote, “Fuck Your Gun,” and I incorporate its text here by reference.

In July 2017, Chris Collins proposed a law which would effectively abolish New York’s laws on firearms and require them to be no more restrictive than those found in the most permissive and ammo-liberal state in the Union. State’s rights matter only in the furtherance of a particular ammotastic political agenda. The people who most stridently oppose legislative action on guns enjoy mocking victims of gun violence, suggesting that the USS Gabby Giffords be nicknamed “grey matter splatter”. Then they’ll whine about “tone”, or kids holding picket signs that read, “f racism”.

I don’t have any or all of the answers. But I know that the thoughtless repetition of sentiment and hypocritical, temporary attempts to demand that something be done about mental health aren’t enough.