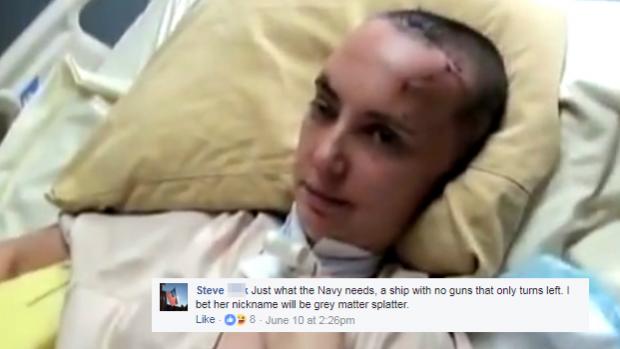 Look, in this place ran Cassius’ dagger through.

Gabrielle Giffords was a congresswoman from Arizona from 2007 to 2012. On January 8, 2011, Giffords held a “Congress on your Corner” at a supermarket in Tucson, where she was meeting with constituents. Suddenly, an well-armed lunatic shot 19 people, killing six, including a federal judge and a nine-year-old girl.

See what a rent the envious Casca made.

Giffords was severely injured as one of the bullets entered the front of her head and exited the rear. She has undergone rehabilitation since then to regain her ability to move, speak, and write, and has become a proponent of common-sense gun control legislation so that others don’t have to endure what she did—others like Congressman Steve Scalise, who now recuperates in hospital after being gravely injured by another well-armed lunatic just last week.

Through this the well-belovèd Brutus stabbed.

Locally, right-wing commentators and politicians have attempted to blame Democrats for the Alexandria shooting that injured Scalise and others. The gunman was revealed to be a progressive supporter of Bernie Sanders and a vehement opponent of President Trump. The problem with the “violent Democrat” meme is that no Democrats, mainstream or fringe, have called for any sort of violence against anyone. Clumsy attempts to equate the “Antifa” black bloc movement with, say, Hillary Clinton are downright laughable. No violent anarchists were big supporters of the woman that even Bernie supporters derided as a “neoliberal shill.” If it were up to Democrats, Scalise’s shooter never should have been able to obtain a concealed carry permit, and even his ability to buy any firearm would have been restricted. After all, Scalise’s assailant has a well-documented history of domestic violence, one of the markers for mass shootings.

And as he plucked his cursèd steel away,

It is utterly contemptible and disgusting for anyone to shoot and kill any innocent victim without provocation. There ought to be no safe space in our society for mass shootings in general or attempted political assassinations in particular. No political party is immune from homicidal lunatics, and people who wish or effect physical harm on political opponents should be prosecuted to the fullest extent of the law. Yet just last week, Representative Chris Collins blamed Democrats for the Alexandria attack, before anyone knew anything about the shooter’s affinity for Bernie Sanders. He later recanted that accusation and apologized, and now pairs his calls for civility with a concealed handgun. Yet just a week earlier, he referred to Governor Andrew Cuomo thusly, “He’s a thug. He’s a bully. He’s an extortionist. He’s a blackmailer. He wants all the authority.” I’m sure it’s not the first time our Italian-American governor was condemned with language reserved for the mob or Mussolini, but it’s notable that a Congressman thought it ok.

Mark how the blood of Caesar followed it,

And when performing Shakespeare’s Julius Caesar, throwing in a contemporary spin and showing the betrayal and assassination of a Donald Trump character today—or, in 2012, a Barack Obama lookalike—isn’t the outrage you’re being told it is. Julius Caesar is not a play that extols the virtues of political assassination. That fact becomes evident literally minutes after the conspirators murder Caesar.

As rushing out of doors, to be resolved

For the sake of civility, I will take the American right’s concern about tone at face value, and not more cynically as a way to exploit a tragedy for political gain. But in order to take this seriously, the right wing have to take a good, long look in the mirror and actually confront what they’ve done and condoned over the last nine years. President Obama was not, as the current President claimed, a secret Kenyan Muslim who literally founded ISIS. Tea partiers routinely referred to President Obama as an African witch-doctor, or an ape, or a traitor to be hanged, or a dictator not dissimilar from Stalin or Hitler. Google it. While this newfound concern about tone and how propaganda can lead to violence is welcome, it’s come dramatically too late. It’s as if John Salvi never shot up a Brookline Planned Parenthood clinic, or James Kopp never shot Dr. Barnett Slepian in Amherst, or Eric Rudolph never set off a bomb at the 1996 Olympics. Tell it to the family of Richard Collins, III, or the brave passengers on a train who were stabbed to death after confronting a white supremacist harassing a Muslim girl. The ascent of Donald Trump has emboldened the violent right fringe.

It’s almost as if a member of the Buffalo school board never wrote in a New Year’s Eve article that President Obama and Valerie Jarrett should be murdered, and that Michelle Obama was a male Zimbabwean ape.

Before you accuse me of whataboutism or tu quoque, understand that I don’t think dehumanizing your political opponents is ever appropriate. By portraying the other side as something not human, or as an illegal usurper — whether it’s George W. Bush or Barack Obama — you give well-armed homicidal cretins an excuse to commit mass murder. If you believe that Obama isn’t a human or founded a nihilist terrorist group, then that’s one less thing stopping some ignorant loner with a rifle from shooting not just the politician, but any of his supporters whom he might encounter. Democrats made this point continually during the tea party protests, and Republicans guffawed at the suggestion that hateful speech could lead to violent action. Now, suddenly, they’ve dramatically changed their tune about tone — even Michigan’s favorite no-hit wonder, Ted Nugent now says he regrets calling President Obama a “subhuman mongrel” who should “suck on [his] machine gun” before being “tried for treason and hung.” Newly minted Montana Congressman Greg Gianforte has also found the word “civility” in his dictionary, just a few short weeks after he beat the shit out of a reporter fro the Guardian who had the nerve to ask him a question about health care.

So, as we consider tone and civility, consider this, from a man recently convicted of election fraud and his pals, discussing a woman who lost part of her brain in public service.

If Brutus so unkindly knocked, or no.

Rus Thompson, incidentally, appeared this past weekend on a radio show on WBEN alongside David DiPietro, a sitting Assemblyman.

Take a look, if you can get past the misspellings — or mistaking Gabby Giffords for NY Senator Kirsten Gillibrand. In describing the naming of a Navy ship for the wife of a Navy pilot and instructor who took a bullet through the brain while meeting with the people she served, at least two people thought it clever to refer to Ms. Giffords as, ”brain dead” and that the ship would have “no guns” and “only turn left”, and that it would likely be nicknamed the, ”grey matter splatter”. Only one person had the morality to challenge this barrage of unmitigated hatred directed at the victim of a horrific crime who served her country with honor and courage.

If you want to lecture people about tone, first make sure your own hands are clean.

This was the most unkindest cut of all.