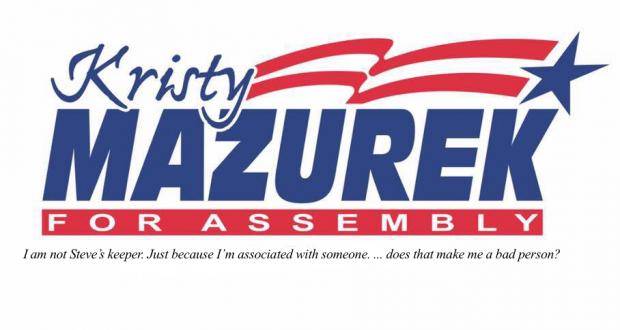 They say a person is known by the company she keeps. With respect to Kristy Mazurek, who is running in the Democratic primary race for the 143th Assembly seat about to be vacated in disgrace by Conservative Angela Wozniak, who replaced Democrat Dennis Gabryszak — who also vacated it in disgrace — the news from her current and former company isn’t good.

Kristy Mazurek is a close confidant of Steve Pigeon, who is under federal and state investigation and has been indicted on nine state felony charges relating to Pigeon’s relationship with former State Supreme Court Justice John Michalek. For his part, Michalek has already pled guilty to crimes related to the same set of facts, resigned his office, and awaits sentencing in September.

While Mazurek pulls the Buffalo News’ leg attempting to distance herself from Pigeon, he grants her power of attorney to sell off his condo. As it happens, Pigeon executed the document in San Diego.

“I am not Steve’s keeper,” she said. “Just because I’m associated with someone. … does that make me a bad person?”

Not necessarily, but when you have power of attorney over someone’s business transactions you are, in a way, their “keeper”; at least for the purpose(s) described. But no one is arguing whether or not Mazurek is a “bad person”. There are plenty of “bad people” who are concomitantly qualified or competent to be elected to public office. Mazurek isn’t one of them. Look, if Mazurek doesn’t have a problem being associated with Pigeon, she shouldn’t crop him out of pictures she uses on her lit.

I have no idea what Pigeon might be up to in San Diego, but that locale doesn’t seem to be an accident. Pigeon’s erstwhile protege and former State Senator Anthony Nanula lives there, and in 2012 he co-founded American Coastal Properties with Buffalo developer Nick Sinatra. WGRZ recently reported on the appendices to the warrants that enabled law enforcement to enter and search Pigeon’s condo. From Channel 2’s story:

One of them was the search warrant in question. In it, it states the search is looking for evidence related to “Steve Pigeon’s unlawful lobbying on behalf of Nick Sinatra”.

Sinatra is a former Republican operative who is now head of Sinatra & Company, a growing real estate development company in Buffalo.

When 2 On-Your-Side reached out to Sinatra, this statement was offered on his behalf:

Then there’s another document the Pigeon defense team would like the jury not to see. It is a report of a police interview with Pigeon from August of 2008. The interview was conducted by investigators from the Erie County District’s office and the FBI.

According to the report, Pigeon acknowledges he is owner of a business called Landon Associates. Named as his business partner is Roger Stone, who Pigeon reportedly describes at the, “Darth Vader of the Republican Party.”

Seeing “Landon Associates” in a campaign’s filing is like a coded beacon that the Pigeoning of an election is underway. (E.g., here, here, here). Sinatra’s company was somehow caught up in the 2013 financing of the WNY Progressive Caucus (“AwfulPAC”). On August 19, 2013, AwfulPAC reported receiving $4,000 in one lump sum from Frank Max’s Progressive Democrats of WNY. Yet for some reason Max’s group didn’t report it that way, instead showing three separate amounts. AwfulPAC also says that it received money long before Max’s group says it contributed it, which is truly psychic in its prescience. The money orders were supposedly purchased by an employee of Sinatra’s, who denies having done so; his name was allegedly improperly substituted for the actual purchaser, and anyone purchasing a money order for more than $3,000 must show ID. That Nanula/Sinatra venture may explain G. Stephen’s visit to sunny California.

As for Mazurek’s fitness for public office, her former co-worker, Bill O’Loughlin, deserves a hearing. O’Loughlin took his morning political talk radio program from WECK to Channel 2, and brought on Mazurek as a Democratic foil on the show known as “2Sides”. O’Loughlin quit 2Sides, and reveals on his new radio program that Mazurek was the reason he left; that he could no longer work with her. O’Loughlin spent a good portion of his August 28th program explaining why he thinks Mazurek is not qualified for public office, which he boiled down to, ”drunk in Albany, drunk in Georgia, lawyered up.” Mazurek continued 2Sides with co-hosts including current Comptroller Stefan Mychajliw, former Collins Chief of Staff Chris Grant, and political consultant and PR flack Michael Caputo.

These are ringing endorsements indeed.