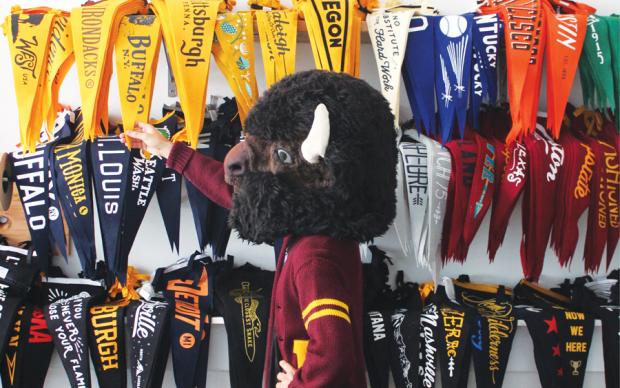 A lot can happen in three months: You go away for the summer, come back, and all your friends have new tattoos. Or no tattoos. The dive bar where you used to shoot pool has hired an oyster shucker and makes its own bitters; there are roundabouts where once there were flashing yellow lights.

Here are just a few things that happened in Buffalo while the region’s college students were on hiatus:

A key bridge at the foot of Ferry Street linking the West Side to its waterfront that was under construction these past 18 months finally reopened in June. One of the most scenic and relaxing places in the area is the 1.7-mile Bird Island Pier.

Noodle in the Northern Lights

This Instagram-worthy mural covers the entire side of 710 Main Theatre between Main, Pearl, and Tupper.

Billy Club (228 Allen Street) opened at the end of May, giving a much needed breath of fresh air to Allentown’s restaurant scene.

When you left, the Bills had drafted two key pieces to end the longest playoff drought in pro sports: Shaq Lawson and Reggie Ragland. Both have since suffered major injuries and only Lawson has the possibility of seeing the field by the season’s midpoint. Go Bills!

As if Ballyhoo (211 South Park Avenue) couldn’t get any better, they went ahead and released a new cocktail menu filled with 30 old stand-bys, plus a few modern libations for good measure.

One of Philly’s elite bartenders has returned to Buffalo to open his own bar and restaurant in Black Rock. A large portion of the team is made up of Buffalo boomerangs who are looking to bring outside experience to their 491 Amherst Street location, formerly home to Black Rock Kitchen & Bar. Will be opening as soon as the liquor license is cleared.

A new spot for coffee and lunch, with plenty of room to get some work done. Oh yeah, and it’s in an old funeral home. 580 South Park, corner of Hamburg.

Lloyd’s brick-and-mortar, 1503 Hertel Avenue, is now open on Sundays for brunch serving up a special menu of cocktails and dishes. The churro French toast is a must and is supplied another favorite, Breadhive.

Check out Ferry and Richmond and 950 Broadway for a temporary splash of draped fabric color. This public art was a community effort and will only be up for a short time. Get ready for selfies.

Despite being appointed chair of the state Democrats and getting front row for Paul Simon at the Democratic National Convention, Mayor Byron Brown has had something of a rough summer as he eyes potential promotion to Congress or a federal appointment in the Clinton administration. The city’s lead testing protocol and its zero tolerance policing policy have taken hits, but nothing is potentially more damning to his fortunes than having his former deputy mayor, Steve Casey, “cooperating” with the FBI on corruption allegations.

The 500 Block of Main Street

Recently opened to cars once again, the 500 block of Main Street boasts two new restaurants: Raclette’s for French food and D’Avolio, a suburban import featuring pizzas, salads, and sandwiches along with various olive oils and vinegars—in addition to Oshun, which has anchored the block heretofore. Additionally, Jerks has opened, offering old-time confections and malts in a 1950s atmosphere. Just Fries has opened here, too, and you can guess what they serve. Finally, Furnishings will make your new room look great.

Canalside Concerts May Be on the Move

The most successful public events in the city’s recent memory may be forced to a new location in the future. There have always been concerns about noise and security, and this summer Canalside’s popularity may have reached a tipping point, with a packed July 4 crowd that panicked when it thought it heard bullets instead of fireworks, and the T-Pain show, during which a crush of people overwhelmed the security barriers.

If you find yourself out in the ’burbs, check out East Amherst’s new blue-collar Americana eatery, Oak Stave (5989 Transit Road). Try the Cowboy Steak or Stave Burger with a Whiskey Hard Cider to wash it down.

Designers and producers of vintage style pennants and banners. Their new showroom downtown on Tupper may have limited hours, but the shop’s website (oxfordpennant.com) makes it easy to upgrade your collegiate gear with a click of a button.

High-rise on the Outer Harbor?

Gerald Buchheit, a developer with an uneven history, is moving forward with plans for a 23-story apartment building on Buffalo’s Outer Harbor, raising again the question of what the community’s collective vision is for the industrial parcels that have been reclaimed by parks and nature preserve.

After one prospective deal to buy the tower fell through, several prominent voices argued for demolishing the structure to reintroduce a prized piece of real estate for development. (And, in some cases, to protect the value of their existing holdings in downtown Buffalo.) But Buffalo’s tallest and emptiest building is again under contract for purchase by another out-of-state developer for $12 million.

Loaded with prospects and draft picks, the Sabres lit a third round pick on fire, exchanging it for the rights to prized NHL-ready college forward Jimmy Vesey. Vesey stayed true to his original plan and spurned the Sabres flirtations by signing last week with the New York Rangers, ensuring that the Sabres are stuck negotiating the out-of-control frat boy behavior of winger Evander Kane.

Though this truck may look like it will run you down, with claw marks and sharp teeth painted all over it, don’t worry, it’ll probably slow down for you—if you’re a meat lover, that is. If not, move out of the way, because the Carnivorous food truck is “meat centered.” Their motto is “There is room enough for all of God’s creatures right next to the mashed potatoes, so pass the gravy and enjoy.” Menu items change seasonally but expect things like giant turkey legs, fried bologna sandwiches, and pot roast. Find them at carnivorousfoodtruck.com.

Return of the Back Room of Hardware

In February of this year, the Back Room of Hardware, the dance club and bar in the back of Allen Street Hardware (245 Allen Street), was closed down in Footloose-esque fashion for failure to maintain a dance permit. Last weekend the club had its grand reopening, sporting a few changes—$100,000 worth of changes actually—which include added rest rooms, a new DJ booth, and a bunch of safety renovations.

Peach Mag (peachmgzn.com) is a new online literary magazine for writers looking for an outlet to share their poetry and creative writing. “We want to connect people our age who don’t have book deals yet, those who are just discovering creative writing for the first time. We want to be able to make those connections for people in Buffalo,” said Rachelle Toarmino, one of the magazine’s editors in a recent interview with The Public. Peach Mag is now accepting submissions. Send yours to peachmgzn@gmail.com.

As early as next month, the US Department of Energy may use the Peace Bridge to transport liquid nuclear waste from Chalk River, Ontario, to the Savannah River Site nuclear reservation in Carolina. If it happens—the Peace Bridge route is just one that the DOE has adopted—we’ll never know unless there’s an accident. Several environmental groups have filed suit to prevent the transport of waste through Western New York, and Congressman Brian Higgins is flexing his muscle to make the DOE stand down, too.